Inflation or price rise has been a major concern of policymakers for a long long time. Common man also lists price rise among his top most concerns. Responsibility of controlling price rise lies with government and RBI. But to control something, we need data which tells us direction in which we are moving.

In India, that data or measure of inflation is Wholesale Price Index (WPI) and Consumer Price Index (CPI). But of late both these data sets are moving in opposite direction.

Then are the prices rising or falling? What explains the difference b/w these two indicators? Which one should be used for taking important policy decisions which affect the whole economy? And finally why is inflation such a bad thing and if it were such a bad thing, surely deflation should be great. who wouldn’t like cheap goods! But why is then Japan struggling with precisely such a thing and Eurozone doing its utmost to avoid deflation?

Inflation is a sustained increase in the general price level of goods and services in an economy over a period of time.

Let’s understand this with a one commodity economy first-

But suppose both apples are oranges are consumed in India and prices of oranges actually fell from 100 to 95 and then 90.

Here, we introduce the concept of weights. When calculating general inflation, we need to assign weights to different goods and services in the proportion they are consumed and then we take weighted average to compute general inflation.

The year whose consumption level is included in creation of basket of goods and services is called base year, in this case 2010. Base Year has to be frequently revised as consumption basket keeps on changing. For instance, pizza would not have been in the consumption basket about a decade back.

in 2012 there is negative inflation while w.r.t to 2010, prices have risen significantly.

In this scenario also prices in 2010 and 2012 are same but due to excessive inflation in 2011 in earlier case, 2012 appeared to be deflationary.  This anomalous situation is being created due to base effect.

What we were calculating till now was price rise in items average citizen consume. Because we are talking about consumers this is called Consumer Price Index (CPI) inflation.

These broad categories are further divided into subcategories but that’s not important. What is important is that about 46% weight is given to food items and any increase in food prices will lead to increase in CPI inflation.

Other point to note is that health, education etc services are also there in CPI basket. we shall later see services are not in WPI basket and thus CPI gauges services inflation as well.

But food prices are highly volatile as food products can’t be stored for long and prices depend on agriculture output. Also food is an essential good and people will buy food no matter what the food prices are, food inflation is not much affected by central bank policies. It’s a supply side issue.

Similar is the case with fuel prices which are highly volatile.

That is what newspaper headlines report

Earlier we used to calculate 4 different categories of CPI inflation

First 3 computed by Labour bureau, as you can guess and the last one by CSO. We continue to compute these indices but focus now is on CPI (rural), CPI (Urban) and overall CPI

Why is CPI important-

It directly affects what consumers pay to buy a select basket of goods and services. It is thus better indicator of the cost of living and, hence, reflecting the welfare objective of monetary policy.

Note here that WPI does not take into account inflation in services sector such as education, health etc. while 65% of our GDP comes from services sector i.e. it does not give complete picture of price rise in the economy.

In spite of that, RBI used to focus on WPI earlier as CPI basket and base year was not frequently revised and data set was not robust but after the signing of monetary policy framework RBI has decided to focus on CPI as it directly affects consumers and thus better indicator for policy formulation.

But if RBI is to focus on CPI only, what’s the importance of WPI and why so much divergence with WPI in negative and CPI 5% in positive.

2. Transaction costs – Middlemen might have increased their profit margin

If same item has higher inflation in CPI than WPI, possible reason could be higher margins and govt can target that area to bring down inflation.

What is Produce Price Index (PPI)

PPI is inflation at producer level without any tax component

Advantage of PPI over WPI

Govt set up a committee headed by Professor BN Goldar to devise PPI.

Earlier two separate groups headed by Abhijit Sen and Saumitra Chaudhuri underscored the importance of PPI but felt that more work and data was needed to fully construct PPI.

Deflation- Opposite of inflation i.e. general decline in prices. it is generally associated with contracting economy i.e. recession and is much more dangerous than inflation.

Disinflation-Slow down in the rate of inflation i.e. prices are still rising but as the lower pace. Eg. If inflation rate was 10%, 2 years back, 8% last year and, 6% this year, economy is said to be in disinflation.

Hyperinflation– Very high and accelerating inflation which cause people to severely curtail their use of the currency as currency simply becomes worthless. For instance in Germany after 1st world war or in Zimbabwe a few years back. Prices rise 10% or more month on month.

stagnation plus inflation i.e. inflation in a stagnating economy. Generally inflation is associated with a booming, high growth economy but when economy is contracting, growth rates are coming down, unemployment is rising and there is high inflation , it is called stagflation.

What are the causes of inflation?

Essentially there is more amount of money to buy limited amount of goods and services leading to rise in prices (demand supply mismatch). It could be due to following reasons-

3. Built in inflation is induced by adaptive expectations, and is often linked to the price-wage spiral. Essentially workers try to keep their wages up with prices (above the rate of inflation), and firms pass these higher labor costs on to their customers as higher prices, leading to a ‘vicious circle’.

1.Most important positive is that it avoids deflationary tendencies which is the worst

Consider this, real salary has decreased but person would feel he had been awarded 8% pay hike.

But if there were no inflation, he would have resisted wage decline, though it would have been same, worth 9 kg apples.

Inflation especially demand pull inflation is associated with high growth and low unemployment. As demand rises, industries increase their production leading to higher growth and employment. This holds true only for short term.

A few more terms before we wind up our discussion –

Phillips curve is a historical inverse relationship between rates of unemployment and corresponding rates of inflation. 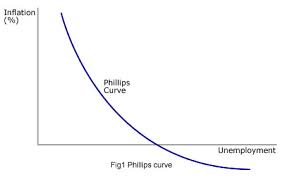 Misery index – the sum of the inflation and unemployment rates

Modified misery index – sum of the interest, inflation, and unemployment rates, minus the year-over-year percent change in per-capita GDP growth

In the next article we shall discuss tools available with government and RBI to control inflation and why monetary policy transmission is very poor in India.

#1. Which of the following brings out the ‘Consumer Price Index Number for Industrial Workers? (IAS pre 2015)

#2. A rise in general level of prices may be caused by

#4. India has experienced persistent and high food inflation in the recent past. What could be the reasons?(2011)

#5. A rapid increase in the rate of inflation is sometimes attributed to the “base effect”. What is “base effect”?(2011)