The major factors responsible for the formation of soil:

The major factors affecting the formation of soil are relief, parent material, climate, vegetation and other life-forms and time. Besides these, human activities also influence it to a large extent.

The parent material of soil may be deposited by streams or derived from in-situ weathering. Soil inherits many properties from the parent material from which it forms, for example, the mineral composition, the colour, the particle size and the chemical elements.

The role of climate is to vary the inputs of heat and moisture. It affects the rate of weathering of the parent rock. Hot and humid environments, in general, witness the most rapid weathering of parent materials.

Topography is often considered a passive factor modifying the effects of climate.

Topography redistributes the water reaching the soil surface. Runoff from uplands creates wetter conditions on the lowlands, in some cases saline sloughs or organic soils. Thus, as a redistributor of the climate features, topography affects soil processes, soil distribution and the type of vegetation at the site. 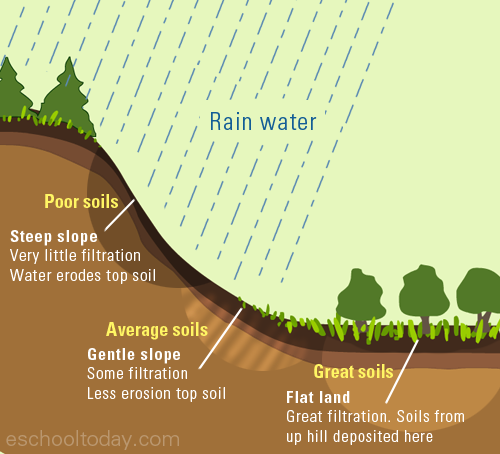 Soils can take many years to form. Younger soils have some characteristics from their parent material, but as they age, the addition of organic matter, exposure to moisture and other environmental factors may change its features. With time, they settle and are buried deeper below the surface, taking time to transform. Eventually, they may change from one soil type to another.

Look at the following diagram for a quick revision of the above-discussed facts: 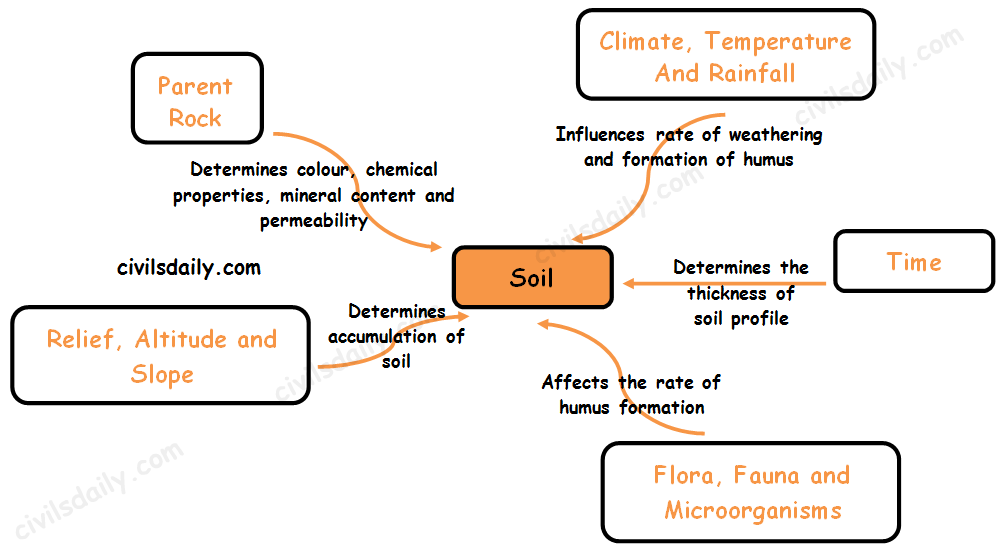 The above factors are not mutually exclusive but interdependent. For example, the kind of vegetation found at any one location on the earth’s surface is dependent on climate, parent material, topography, time and, in fact, soil. It is obvious that numerous combinations of the factors are possible. This leads to many different kinds of soils, each representing a certain combination of the factors of soil formation.

As we discussed earlier, soil development begins when plants and animals colonize rocks or deposits of rock fragments. Once organic processes start among mineral particles or rock fragments, chemical and physical differences begin to develop from the surface down through the parent material.

Initially, vertical differences result from surface accumulations of organic litter and the removal of fine particles and dissolved minerals by percolating water that deposits these materials at a lower level.

If you could dig a massive trench, about 50-100ft vertically downwards into the ground, you will notice that you would have cut through various layers of soil types. A look at the layers from a distance gives one a cross-section view of the ground (beneath the surface) and the kind of soils and rocks it is made up of. This cross section view of soil from the surface down to the parent material is called a Soil Profile.

The Soil Profile is a product of the balance between the soil system inputs (i.e. additions) and outputs (i.e. losses) and the redistribution of (i.e. translocations), and chemical changes (transformations) in the various soil constituents.

The soil profile is made up of layers, running parallel to the surface, called Soil Horizons. These layers are distinguished by their physical and chemical properties.

Most soils have three major horizons. These are A Horizon, B Horizon and C Horizon. Aside these three, there are also the O, E and R horizons. How are they different? Let’s see!