Knowing a soil’s water, mineral, and organic components and their proportions can help us determine its productivity and what the best use for that soil may be. Several soil properties that can be readily tested or examined are used to describe and differentiate soil types. The most important properties are discussed below:

1. Colour: A soil’s colour is generally related to its physical and chemical characteristics. E.g.

2. Texture: The soil texture refers to the coarseness/fineness of the mineral matter in the soil. It is determined by the proportion of the sand, silt and clay particles:

[Rocks larger than 2 millimetres are regarded as pebbles, gravel, or rock fragments and technically are not soil particles.]

Clay being the finest of all plays the most important role in soil chemistry (offers more surface area). 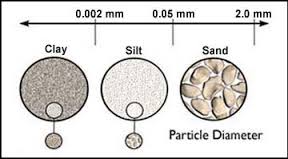 The proportions of each of these soil fractions determine soil texture and its properties.

Loamy Soil: Loamy soil is the one in which none of the three (sand/silt/clay) dominates the other two. In particular, loamy soil has about 40% sand, 40%silt, and 20% clay. 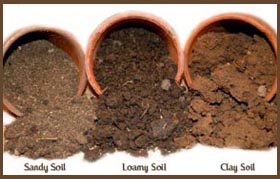 Generally speaking, Good Soils = Clay + Humus. The clay-humus complex is essential for a fertile soil as it provides it with a high water and nutrient holding capacity. Humus acts as a cement binding the soil particles together and thus reducing the risk of erosion.

Some structural characteristics of soil: 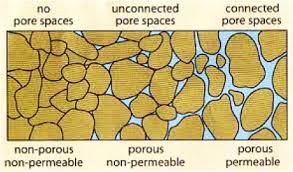 An important aspect of soil chemistry is acidity, alkalinity (baseness), or neutrality.

Low pH values indicate an acidic soil, and a high pH indicates alkaline conditions. Most complex plants grow only in the soils with levels between pH 4 and pH 10 but optimum pH varies with the plant species. 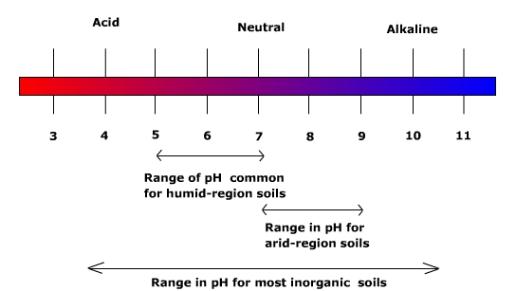 Now that we are done with the basics, let’s move on to the soils of India!

India has varied relief features, landforms, climatic realms and vegetation types. These have contributed to the development of various types of soils in India.

1. In ancient times, soils used to be classified into two main groups:

2. In the 16th century A.D., soils were classified on the basis of their inherent characteristics and external features such as texture, colour, the slope of land and moisture content in the soil.

3. The National Bureau of Soil Survey and the Land Use Planning an Institute under the control of the Indian Council of Agricultural Research (ICAR) did a lot of studies on Indian soils. In their effort to study soil and to make it comparable at the international level, the ICAR has classified the Indian soils on the basis of their nature and character as per the United States Department of Agriculture (USDA) Soil Taxonomy.

Chief characteristics of these are:

4. On the basis of genesis, colour, composition and location, the soils of India have been classified into:

5. Another way of classifying rocks is on the basis of dominant soil forming factors:

about soils ur presentations is so good than other sites