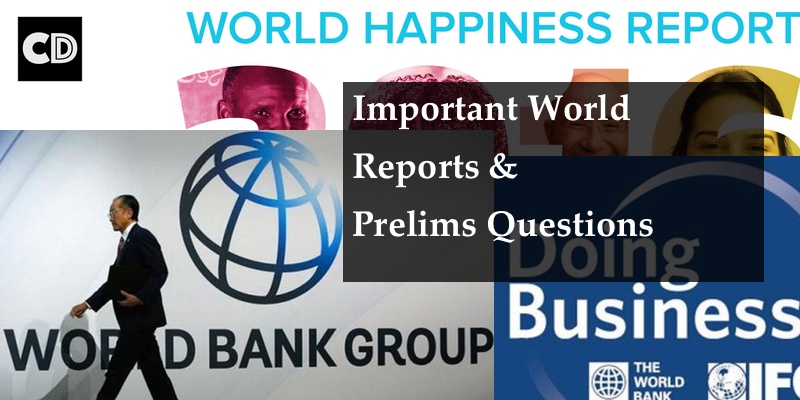 Recently, UPSC has been asking questions on reports published by various international organisations. It is very important to look for reports where India’s performance is less than satisfactory or where the gains have been marginal on an year on year basis.

Here is a list of a few IAS Prelims questions before we deep dive into some of the very important reports, their issuing agencies and their modern day relevance.

Question: Which of the following organizations brings out the publication known as ‘World Economic Outlook’?

Question: Which one of the following issues the ‘Global Economic Prospects’ report periodically?

Question:Which of the following is/ are the indicator/ indicators used by IFPRI to compute the Global Hunger Index Report?

Select the correct answer using the code given below

Question: India’s ranking in ease of doing Business Index’ is sometimes seen in the news. Which of the following have declared that ranking?

Question: ‘Global Financial Stability Report’ is prepared by the

Here is a list of important indexes and reports published by various international organisations for quick revision.

Latest in News – According to World Economic Outlook October 2016, global growth is projected to slow to 3.1 percent in 2016 before recovering to 3.4 percent in 2017.

Latest in news – The World Bank revised its 2016 global economic growth forecast down to 2.4 percent from the 2.9 percent pace projected in January. The move is due to sluggish growth in advanced economies, stubbornly low commodity prices, weak global trade, and diminishing capital flows.

Latest in news – According to World Development Report 2016: Digital Dividends, digital technologies have spread rapidly in much of the world. But, digital dividends—that is, the broader development benefits from using these technologies—have lagged behind.

Latest in news – India has moved one rank up to the 130th position in the World Bank’s ‘ease of doing business’ ranking for 2017. This marginal improvement came on the back of slight improvement in four indicators — getting electricity, enforcing contracts, trading across borders and registering property. To read in detail about the Ease of Business ranking, click here.

Latest in news – According to the World Investment Report 2016, India has retained its ranking as the 10th highest recipient of foreign direct investment in 2015, receiving $44 billion of investment that year compared to $35 billion in 2014. India also jumped a place in terms of attractiveness as a business destination in 2015, to 6th place, with 14% of the respondents naming it as their destination of choice.

Latest in news – The 2016 Logistics Performance Index (LPI) allows for comparisons across 160 countries. India’s ranking jumped from 54 in 2014 to 35 in 2016. India is ahead of comparatively advanced economies like Portugal and New Zealand.

Latest in news – According to the October 2016 report, the transmission of monetary policy is stronger in economies with larger nonbank financial sectors.

Latest in news – The India State of Forest Report released in Dec 2015 showed an increase in India’s forest and tree cover. Click here to read more.

Latest in news – As per the 2016 report, with the decline of the global air quality, action in some air quality areas points to political will to tackle this global public health emergency although current efforts still fall short.

Latest in news – According to the ‘Global Environmental Outlook (GEO-6): Regional Assessments’, worst impacts of climate change will occur in pacific, south and south-east Asia. By 2050, around 40 million people of India may get affected due rising sea levels, storms, and cyclone. It will affect India, China, Bangladesh coastal regions.

Latest in news – The 2016 report revealed that environmental crime grew up by 26 % larger than previous estimates of 2014. Environmental crime is the world’s 4th largest criminal enterprise after drug smuggling, counterfeiting and human trafficking. Environmental Crime includes the illegal trade in wildlife, corporate crime in the forestry sector, the illegal exploitation and sale of gold and other minerals, illegal fisheries, the trafficking of hazardous waste and carbon credit fraud.

Latest in news – According to the 2015 report, average annual loss (AAL) from multi-hazard disasters in India is to the tune of $9.8 billion per year as 58.6 per cent of its land is prone to earthquakes and 8.5 per cent vulnerable to cyclone.

Latest in news – With wildlife disappearing at an “unprecedented” pace across the world, the Living Planet Report 2016 identifies India as an ecological black spot where around half of the wildlife lives in the danger of being wiped out. The report highlights the pressure on water and land India faces because of unsustainable human activities. Around 70% of surface water is polluted and 60% of ground water will reach critical stage — where it cannot be replenished — in the next one decade,

Latest in news – No safety concerns were raised by United Nations watchdog, International Civil Aviation Organisation (ICAO), during its recent safety audit of India’s aviation standards. Indian compliance rates as regards quality control, regulatory framework and in-flight, passenger and cargo security were assessed to be 99.25 per cent against a world average of about 66 per cent.

Latest in news – India scored a major improvement in its Global Innovation Index ranking this year, moving up to the 66th place from 81 in 2015. India’s better performance in the latest index readings was due to its strengths in tertiary education, software exports, corporate R&D and market sophistication. Click here to read more.

Latest in news – The World Energy Outlook 2015 (WEO-2015), in light of low energy prices, calls for no complacency on energy security front and sees clear signs that the energy transition is underway, that is, from fossils to renewable. India, which will move to the centre stage of global energy, is the subject of an in-depth focus in WEO-2015.

Latest in news – As per the 2015 OPEC World Oil Outlook (WOO), oil and gas, combined, are expected to supply around 53 percent of the global energy demand by 2040.

Latest in news – Overall, India leapt 14 places from the 85th rank last year to the 61st in the 2016 Global Innovation Index (GII). India has also been ranked the world’s top exporter of information and communication technology and the report recommends that India should leverage this lead to innovate in emerging areas where biology and materials sciences intersect with computing.

Latest in news – India ranks 91 on the Networked Readiness Index (NRI) 2016, a key component of the World Economic Forum’s The Global Information Technology Report 2016. The report assesses the state of networked readiness of 139 economies using the NRI and examines the role of information and communication technologies (ICTs) in driving innovation. The NRI is thus a key tool in assessing a country’s preparedness to reap the benefits of emerging technologies and capitalize on the opportunities presented by the digital transformation.

Latest in news – The Global Wage Report 2014/15 warns of stalled wages in many countries and points to the labour market as a driver of inequality.

Latest in news – The World Employment and Social Outlook – Trends 2015 (WESO) warned that unemployment will continue to rise in the coming years, as the global economy has entered a new period combining slower growth, widening inequalities and turbulence. According to the report, by 2019, more than 212 million people will be out of work, up from the current 201 million.

Latest in news – India ranks 97th out of 118 countries in the According to index. Also, according to the report, two out of five children below five years of age are stunted in India. To read more on Global Hunger Index, 2016 click here.

Latest in news – In the World Happiness Report 2016, Denmark took the top spot as the ‘happiest country’ in the world. India is among a group of 10 countries witnessing the biggest happiness decline with a 118th rank in the index.

Report name – The State of the World’s Children reports

Latest in news – The 2016 report states that five countries account for more than half of the global burden of under-five deaths. These countries are India (17 per cent), Nigeria (15 per cent), Pakistan (8 per cent), the Democratic Republic of the Congo (7 per cent) and Angola (5 per cent).

Latest in news – According to State of World Population 2015 Report, more than 100 million people today require humanitarian aid because of natural disasters and violence, more than at any time since World War II. About one-quarter of these people are women of reproductive age.

Latest in news – Out of the 144 countries surveyed, while Iceland topped the Gender Gap Index for the eighth consecutive year in a row, India stood at 87th position, from the 108th position in 2015. Through the Global Gender Gap Report, the World Economic Forum quantifies the magnitude of gender disparities and tracks their progress over time, with a specific focus on the relative gaps between women and men across four key areas, namely health, education, economy and politics.

Latest in news – The inaugural report in 2016 highlights how the poaching and illegal trade of thousands of different species across the globe present real environmental dangers.