Bop is the oldest and the most important statistical statement for any country. In a nutshell BOP of a country is “a systematic record of all economic transactions between the residents of one country with the residents of the other country in a financial year”.

Economic Transactions include all the foreign receipts and payments made by a country during a given financial year.

The Foreign receipts include all the earnings and borrowings by a country from the other countries.

The accumulation of foreign receipts (net of payments) over the years becomes Foreign Exchange Reserves of a Country.

The Payments include all the spending and lending by a country from the countries of the rest of the World.

The Balance of Payments Accounts of any Country includes Six Major accounts which are as follows:

The six major accounts are clubbed together into two most important accounts. 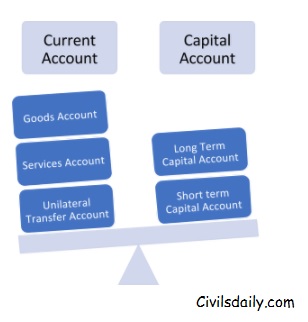 Why are they called Unilateral Transfers?

Unilateral receipts and payments are also called ‘Unrequited Transfers’. They are called so because the flow of transfer is unidirectional or in one direction. There is no liability for an automatic reverse flow or repayment obligation in other direction since they are not lending’s and borrowings. These items are simply gifts, and grants exchanged between governments and people of one country with that of others.

When a Japanese MNC invests in India, India receives a capital inflow in the form of long term capital (FDI). It has a favourable effect on our BOP account. But when the Japanese MNC in India, starts repatriating profits/ sending profits back to their home countries(Japan), there will be a capital outflow from India to Japan.

The understanding of this treatment effect of FDI is very important, since it is always assumed that FDI inflow is good for a host country economy.

Note: I will return to the topic in much detail when I discuss Current account deficit part.

Case 1) BOP Surplus: When Receipts are Greater than Payments in a BOP Account

In all the above cases, the amount is spent on either buying gold, other country currencies or lending. Hence treated as payments.

Case 2) BOP Deficit: When Payments are Greater than Receipts in a BOP Account

In all the above cases, the amount is financed by either selling gold, other country currencies or borrowings. Hence treated as receipts. In this case, a deficit country is receiving a payment to finance its deficit, Hence receipts. Whereas, in a surplus case, a surplus country is siphoning off its surplus amount to invest in Gold or Other currencies, Hence payments.

So nicely explained thanks a lot