The Balance of Trade on the other hand includes both goods balance (Visible) and services (Invisibles) balance.

Should a negative trade balance (excess of imports over exports) be treated as undesirable for an economy? 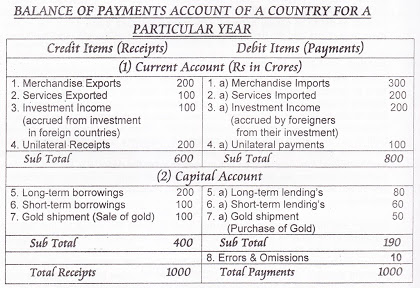 The items 1 to 7 show the total receipts from all sources. These receipts amount to Rs. 1000 Crores.

Hence the credit and debit sides balance & the balance of payments is in equilibrium.

But the balance of payments always balances because every transaction must be settled. Hence total debits must be equal to the total credits.

The very basic point is to understand what a current account deficit or surplus really means and how it is measured?

Whether CAD is Necessarily Bad for an Economy or Not?

Therefore, the key points to remember regarding CAD is as follows:

Evaluation of CAD in India

The period comprised the second, third, fourth and initial years of Fifth five-year plans. The period saw heavy deficits in the current account. The main reasons for high deficits were three wars with China (1962) and Pakistan (1965 and 1971), severe droughts and food crisis of 1965-66 and first oil price shock of 1973.

The period is considered as a golden period for India’s Current Account. The comfortable position was due to increase in private remittances (people working abroad and sending money to their families in home countries) from Gulf countries. The second reason was India witnessing a very strong growth in exports and a reduction in oil imports bill mainly due to fall in oil prices. Efforts were made towards export promotion instead of import substitution. Export subsidies were increased from 20% in 1979-80 to 25% in 1987-88 as a proportion of exports.

The reasons for satisfactory Balance of Payments situation was as follows:

Automatic routes were provided in many sectors where the investor merely has to notify RBI 30 days in advance from bringing the funds. Dividend balancing requirements have been removed.

Role of FIPB: In normal cases, it has to process in 6 months. It can even meet the investor in person to expedite the process. It is empowered to approve 100% FDI in cases of high technology transfers.

As per 2004-05, apart from a negative list, the automatic route within prescribed limits is to be followed by others. Procedures for FDI were also simplified and included things such as conversion of CBs and preference shares into equity. 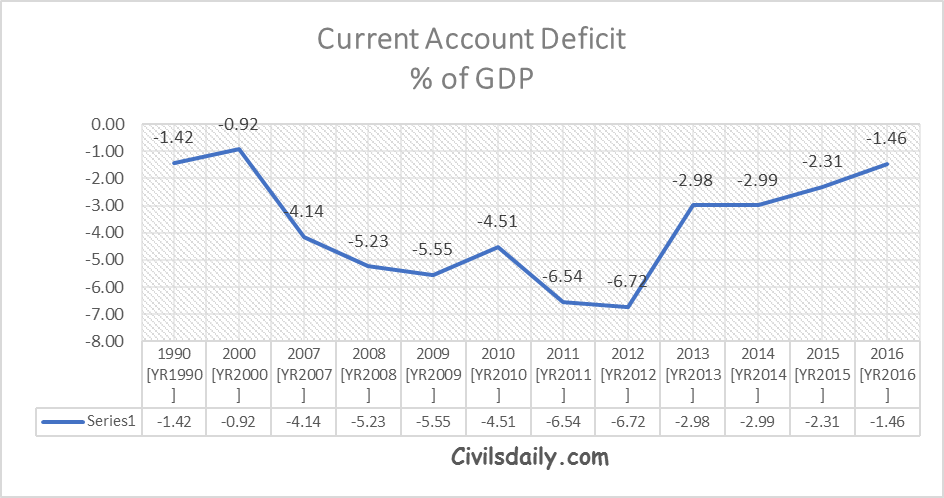 The Problem: New RBI data on India’s Balance of Payments (BoP) for 2017-18 show current account deficit (CAD) at $48.72 bn, the highest since the record $88.16 bn of 2012-13. With CAD expected to widen to $75 bn during this fiscal due to rising crude oil prices. India BOP situation can become vulnerable.

Forex as cushion: India’s forex reserves, at $424.55 billion as on March 2018, are actually the eighth largest in the world. Also, they can finance 10.9 months of imports, compared to 7.8 months in March 2014, 7 months in March 2013 (when there was a mini-BoP crisis, with the current account deficit hitting a peak), and 2.5 months in March 1991 (which forced the country to seek International Monetary Fund assistance).

Therefore, India is not on the verge of any severe BOP crisis as witnessed in 1991. The allusion to a “crisis” from that Balance of Payment standpoint is highly misplaced; the RBI’s current forex war chest is clearly sufficient, both to meet immediate import needs and to stave off a run on the rupee of the kind that was seen during May-August 2013.

In standard trade theory, Countries generally accumulate reserves by exporting more than what they import. However, India always had deficits on its merchandise trade account, with the value of its imports of goods far in excess of that of exports. At the same time, the country has traditionally enjoyed a surplus on its ‘invisibles’ account. Invisibles accounts basically cover receipts from export of software services, inward remittances by migrant workers, and tourism and — on the other side — payments towards interest, dividend and royalty on foreign loans, investments and technology/brands, besides on banking, insurance and shipping services.

But with the invisible account surpluses not exceeding trade deficits — it has resulted in the country consistently registering Current Account Deficits.

A country gets foreign exchange not only from exporting goods and services, but also from capital inflows (FDI, ECB and FPI), whether by way of foreign investment, commercial borrowings or external assistance. In India, for most years, net capital inflows have been more than CAD. The surplus capital flows have, then, gone into building foreign exchange reserves. The most extreme instance was in 2007-08, when net foreign capital inflows, at $107.90 billion, vastly exceeded the CAD of $15.74 billion, leading to reserve accretion of $92.16 billion during a single year. However, there have also been years, such as 2008-09 and 2011-12, which saw reserves depletion due to net capital inflows not being adequate to fund even the CAD. 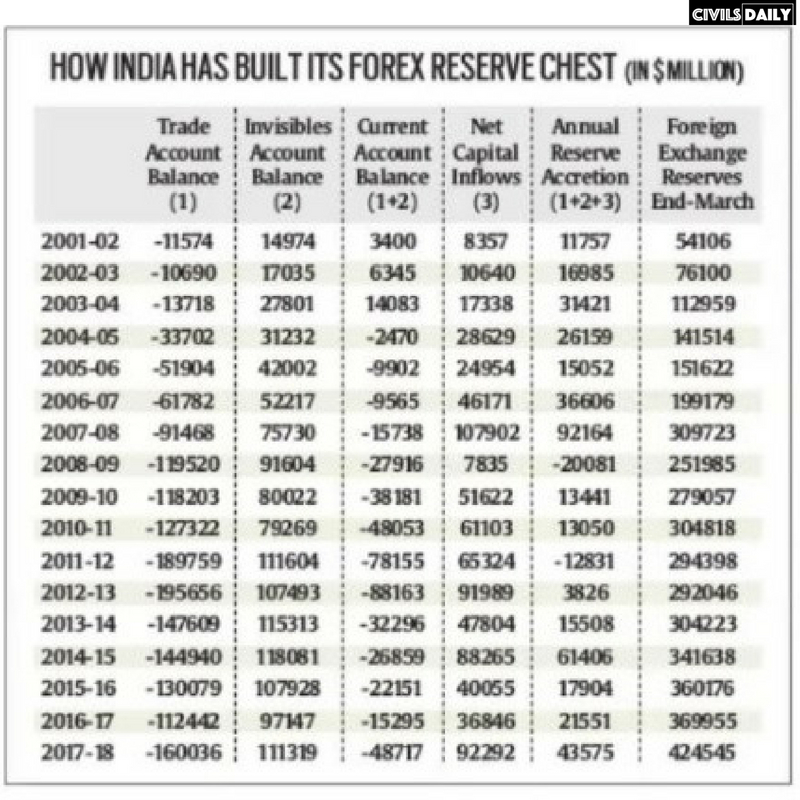 India and Brazil Case Study: They both represent unique cases of emerging economies that have built foreign exchange reserves largely on the strength of their capital account by attracting inflows of foreign funds (FDI, FPI ECB) rather than current account of the BoP.

India is even more unique because its currency, unlike the Brazilian real, is relatively stable, and not under frequent speculative attacks. In theory, a country can keep attracting capital flows to fund CADs so long as its growth prospects are seen to be good, and the investment environment is equally welcoming. It would help, though, if such foreign investment also goes towards augmenting the economy’s manufacturing and services export capacities, as opposed to simply producing or even importing for the domestic market. In the long run, that can help narrow the CAD to more sustainable levels.

There are signs of capital flows slowing down as well. Foreign portfolio investors have, since April 1, made $7.9 billion worth of net sales in Indian equity and debt markets. This is part of a larger sell-off pattern across emerging market economies, in response to rising interest rates in the US, and the European Central Bank’s plans to end its monetary stimulus programme by the end of 2018.

The Swiss investment bank Credit Suisse has forecast net capital flows to India for 2018-19 at $55 billion, which will be lower than the projected CAD of $75 billion. In the event, forex reserves may decline for the first time since 2011-12. The RBI’s data already show the total official reserves as on June 8 at $413.11 billion, a dip of $ 11.43 billion over the level of end-March 2018.

A combination of these factors determines the productivity and overall competitiveness of exports. Therefore, the current decline in India’s exports must be analysed by taking into account the state of play of these external and internal factors.

Till 2013, the relationship between export growth and REER was mixed ( See chart). After this period, it exhibits a clear trend that an overvalued rupee has affected the growth of India’s exports.

This corroborates a well-tested hypothesis that “a stronger currency is not good for export outlook”. Many countries in East Asia including China pursued the strategy of relatively undervalued currency to make their exports competitive in global market under their export led industrialisation.

Therefore, in a highly complex and competitive world, where countries are competing for their export interest, the value of currency must be fairly placed vis-à-vis competing currencies to make one’s export competitive.

Another factor behind the steep decline in India’s exports could be over-dependence on a few markets such as the US and European Union countries which together account for 40 per cent share in India’s total exports. It is particularly important in view of falling demand, stagnant growth and resultant aggregate demand in these countries.

While, India is extensively diversifying its exports market towards Asia through regional and bilateral trading agreements. It has made limited progress in terms of diversifying its exports to non-traditional markets such as South America, Africa and Central and Eastern European countries. Therefore, the diversification of India’s exports market is essential for long term export strategy.

India should adopt a calibrated approach towards structural reforms (connectivity, labour laws, ease of doing, MSME promotion etc) to address cyclical as well as structural factors at the external and internal fronts, which are adversely affecting our export performance.

On the external front, India should engage with likeminded countries and sign free trade agreements which would help us in securing better market access, diversifying our exports and provide greater space for our producers to participate in global production networks.