Back to Basics: In 1947, when India got independence, the Indian economy was suffering from low growth, poverty and resource shortages. The salary of an average Indian was very low. Ask your Grand Parents ‘how much they use to earn in the 1950’s?

Today, an average Indian earns 100 times more than what his grandparents use to earn. Does it mean that the standard of living of the people has also risen 100 times? Before reaching to such a conclusion, one must remember that the prices of goods and services in the economy has also risen.

In 1950’s a Delhi-Mumbai air ticket cost in some hundreds, today it cost in thousand. Similarly, the price of Wheat was in few Paisa; it cost around Rupee 50/kg. Therefore, it is not clear from income, that whether the standard of living of people have risen or not.

To compare the salary of your grandparents to yours, we need some measure of purchasing power or price. The meaningful measure that can perform the task is “Consumer Price Index”. 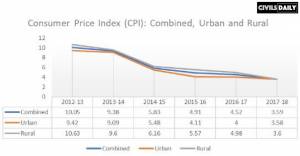 Consumer Price Index: CPI is used to monitor changes in the cost of living over time. When the CPI rises, the average Indian family has to spend more on goods and services to maintain the same standard of living. The economic term used to define such a rising prices of goods and services is Inflation.

Inflation: Inflation is when the overall general price level of goods and services in an economy is increasing. As a consequence, the purchasing power of the people are falling. For example, if the inflation rate is 4 percent, then a basket of goods (food, clothing, footwear, tobacco, electricity etc) that costs Rs 100 in year 2016-17 will cost Rs 104 in the year 2017-18. As more money is required to purchase the same basket of goods and services, we say the value of money/purchasing power has fallen.

Whole sale Price Index: WPI is used to monitor the cost of goods and services bought by producer and firms rather than final consumers. The WPI inflation captures price changes at the factory/wholesale level.

The WPI and CPI are different indices and are used for different purpose.

It is India’s first housing price index which is an initiative of the National Housing Bank undertaken at the behest of Ministry of Finance. The index was formulated under the guidance of Technical Advisory Committee. It was launched in 2007 and updated periodically with 2007 as base year. The coverage of Residex expands to 26 cities.

Initially, NHB RESIDEX was computed using market data, which 2010 onwards, was shifted to valuation data received from banks and housing finance companies (HFCs). Thereafter, data was sourced from Central Registry of Securitisation Asset Reconstruction and Security Interest of India (CERSAI) from 2013 to 2015.

Nice article. Clear understanding… May it be for the beginners too for that matter.