Water management and conservation has become imperative due to the intense water scarcity, frequent agrarian crisis, farmer distress, recurring floods and droughts, fast ground water depletion and unprecedented weather vagaries due to climate change. ILR as an instrument under National Water Policy to resolve the water crisis in the country has taken centre stage in the minds of policymakers. Its re-emergence in the public debate makes it a hot topic from the above context and important for CSE Mains 2017

Inter Linking of Rivers refers to inter-basin water transfers between 2 or more rivers through human interventions on natural systems.

India’s National Water Development Agency (NWDA) has suggested the interlinking of rivers of the country. The interlinking of rivers has two components: the Himalayan and the Peninsular. All interlinking schemes are aimed at transferring of water from one river system to another or by lifting across natural basins. The project will build 30 links and close to 3000 storages to connect 37 Himalayan and Peninsular rivers to form a gigantic South Asian water grid.

Ken-Betwa link project has been declared as National Project by the Government of India. Damanganga – Pinjal Link Project, Par – Tapi – Narmada Link Project and Mahanadi – Godavari Link Projects have been given a go ahead.

Large variation in rainfall and subsequent availability of water resources in space and time.

Because of this variability of available water, floods and drought coexist in our country in same time and space. ( Kerala, T.N and South Karnataka is facing drought while Rajasthan, Gujarat , Assam reeling under floods) 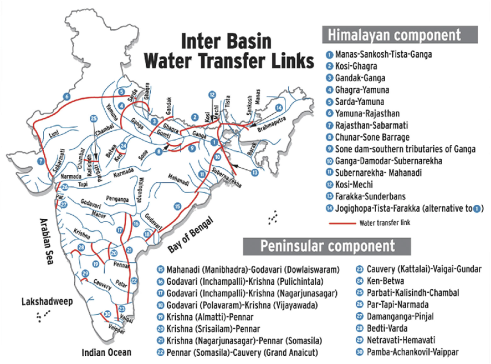 What could be the possible positive implications of ILR Plan?

What could be the possible adverse effects of Inter-River Linking Plan?

River Linking Project involves multifaceted issues and challenges related to environmental, economic, ecological, legal, political and social costs. It has potential for disastrous and irreversible adverse after-effects which has been comprehensively discussed below:

NRLP has its fair share of positives and negatives. Though there are enough apprehensions over the project but they are not backed by any comprehensive scientific evidence to it. Inter basin water transfer is not a new concept.

Formation of River Basin Authority for coordinated action and subsequent building up of consensus among concerned States is prima facie needed. Legal provisions for implementation of ILR related to rehabilitation and appropriate afforestration through CAMPA is to be concurrently addressed.

It is essential that needed environmental safeguards such as comprehensive EIA and SIA are properly implemented in a coordinated manner by various agencies. Therefore, strengthening and expansion of cooperative efforts among the co-basin states and countries will foster co-riparian relationships.

India’s river linking project shows and promises a great concern for water conservation and optimum use of available water resources. Undoubtedly, it is the need of the hour to have a water mission like as IRL, which will enable availability of water to the fields, villages, towns and industries throughout the year post a comprehensive scientific assessment.