Main answer will be in two parts. First discuss the salient features of the doctrine in Indian sense and what are its themes. You have to discuss that rather than strict classification of the doctrine, its more of a check and balance thing in India. How three organs are intermingled rather than water tight divisions between them.

In the second part, you have to mention the working of the doctrine and how How each wing affects other. Quote various judgements that have changed the scope and meaning of separation of power like Kesavananda case and Indira Gandhi v Raj Narain case. Judicial activism is a major bone of contention for the other two organs.

Conclude the answer by discussing why this doctrine is necessary and how it can be improved upon.

In India, separation of functions is followed and not of powers and hence, the principle is not abided in its rigidity. In India, strict separation of powers is not followed as it is followed in the U.S. Apart from the directive principle laid down in Article 50 which enjoins separation of judiciary from the executive, the constitutional scheme does not embody any formalistic and dogmatic division of powers. But a system of checks and balance has been embedded so much so that the courts are competent to strike down the unconstitutional amendments made by the legislature.

Nature of Separation of Power in India:

Working of separation of power in India:

As the doctrine of separation of powers is not codified in the constitution, there is a necessity that each pillar of the State to evolve a healthy trend that respects the powers and responsibilities of other organs of the government. A democracy can thrive only when all the organs cooperate together. It’s time to resolve the differences and move forward with a common goal to take India on great heights. 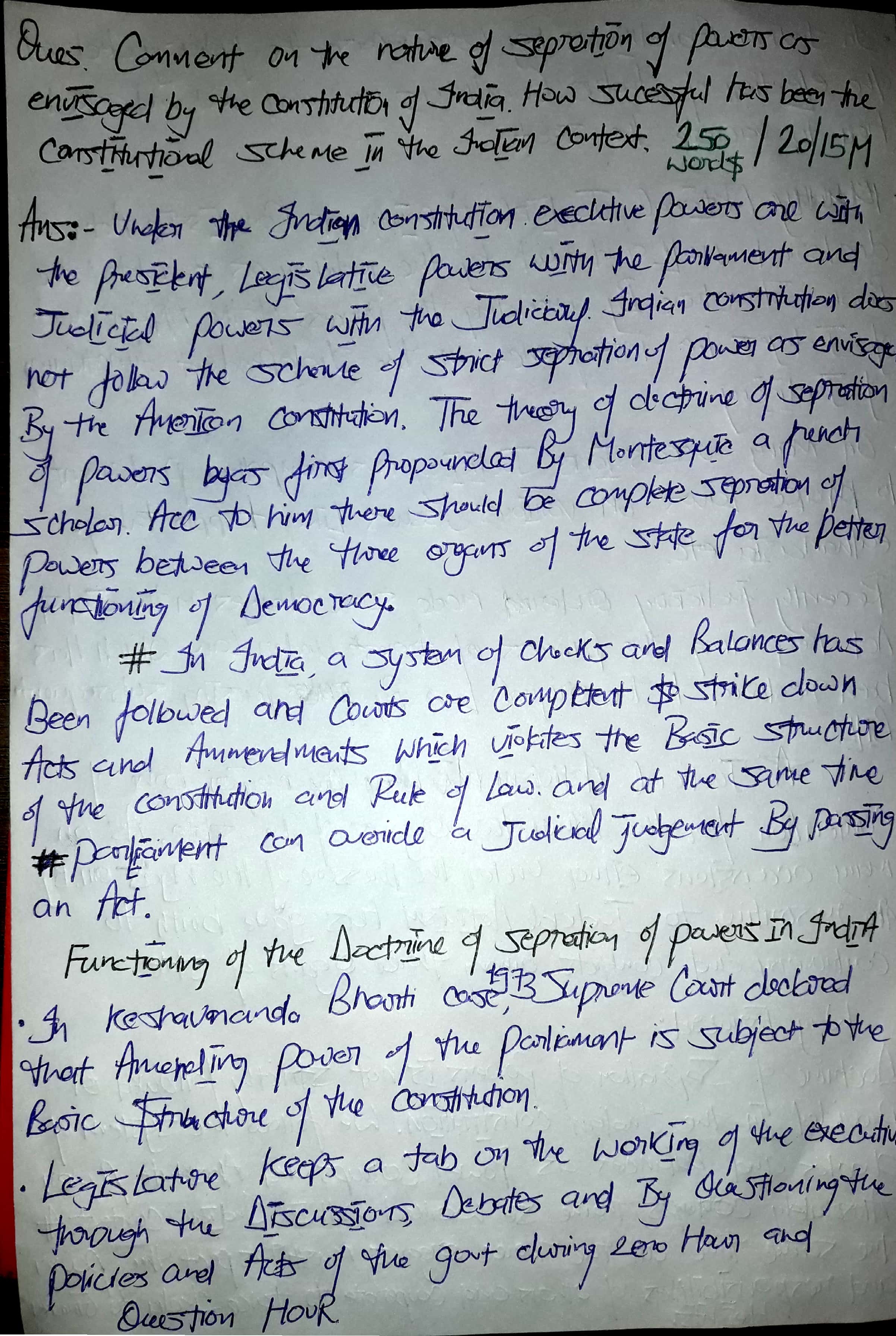 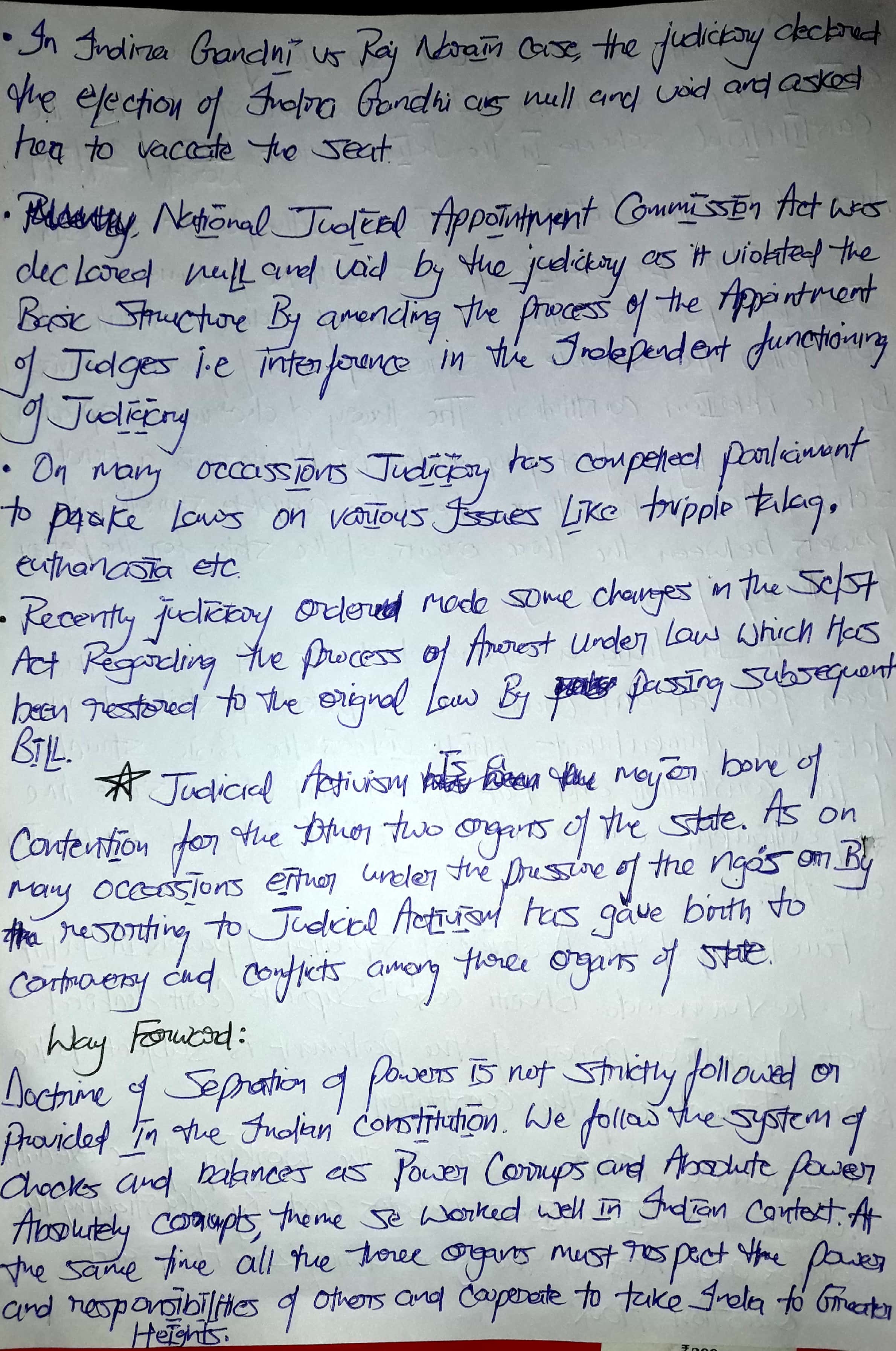 Hello…
Maharaj ShivRaje
-Introduction seems to be okay…okay….
We don’t need to mention about Montesquieu here…unless we want to waste our words…talk more about SoP, BoP etc…
-Ideas in 2nd para is good…but break the sentence…the entire 2nd para is written in one sentence only…
-You have brought very good points under the heading ‘Function of the Doctrine of SoP’ with intelligent analysis….good one….However, the last para with star need some clarity…
-Good ideas in conclusion as well…
Overall nice attempt…good approach…keep writing…
Marks awarded: 5/10 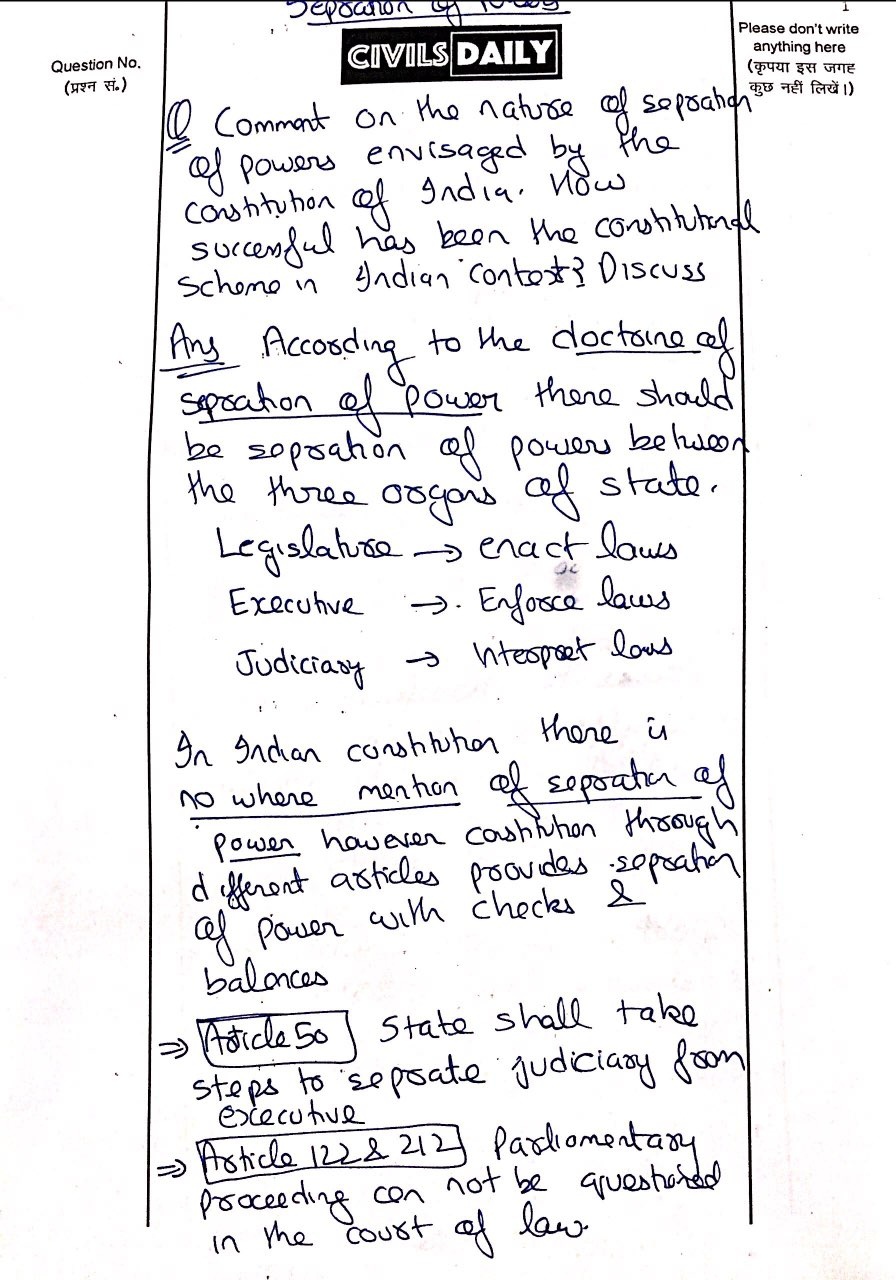 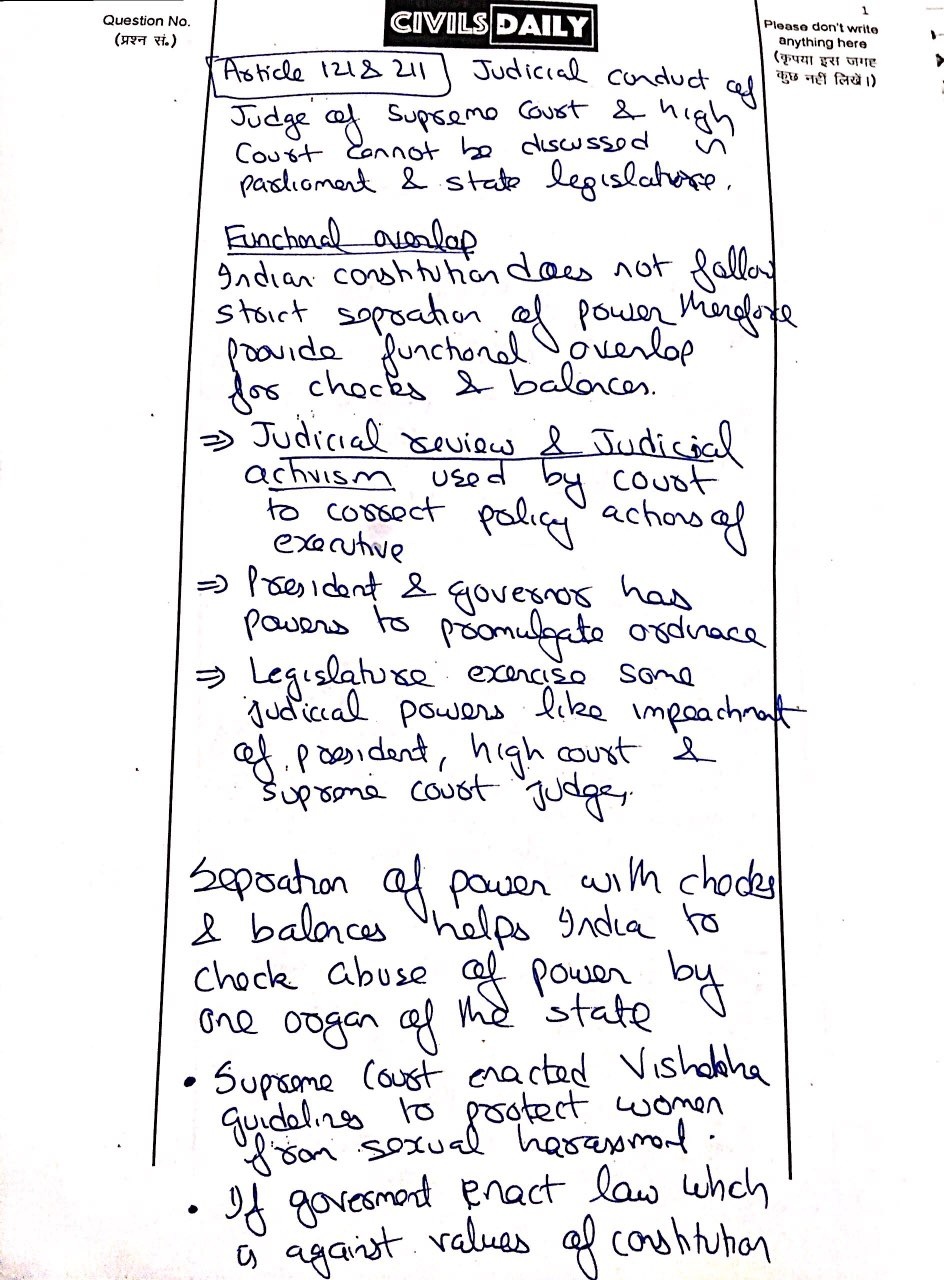 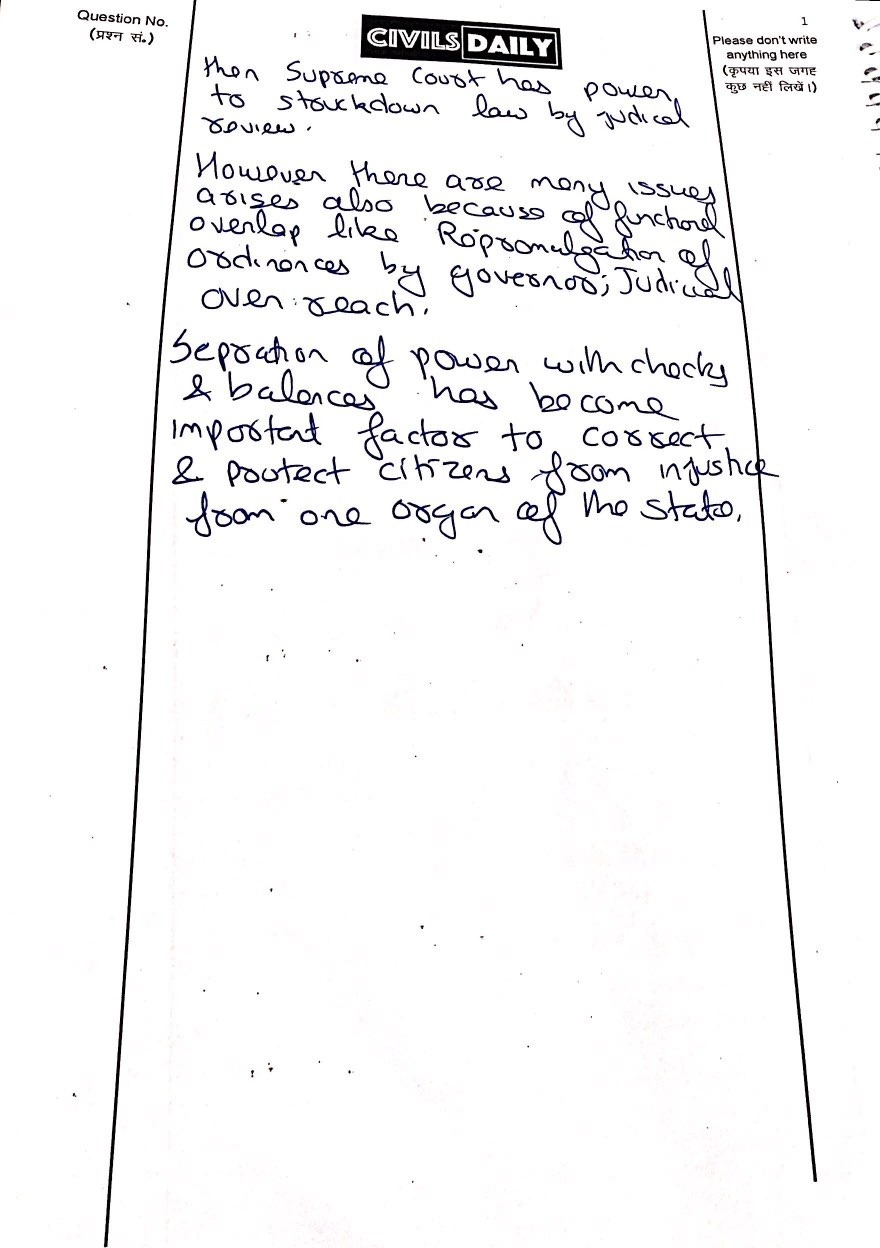 Hello YOGI….
-Introduction is out of context…what you have mentioned…is not required…talk about the Nature of SoP in India…and not in general sense…
-Article 50 is okay…establishes the separation between executive and judiciary…but Art 122, 212, 121, 211 ect. cannot be said to separate the powers or function rather these articles are there to provide supremacy of Constitution…
-2nd last para…governor never promulgate ordinance…
-The rest of the points are good…however, more clarity over check and balance functions need to bring…judiciary propounded the Doctrine of check and balance…which is nothing but to have effective check and balance on other two organs of the state…etc…
-Conclusion is okay…okay…we can bring more ideas here…

However, You attempted well…keep writing… 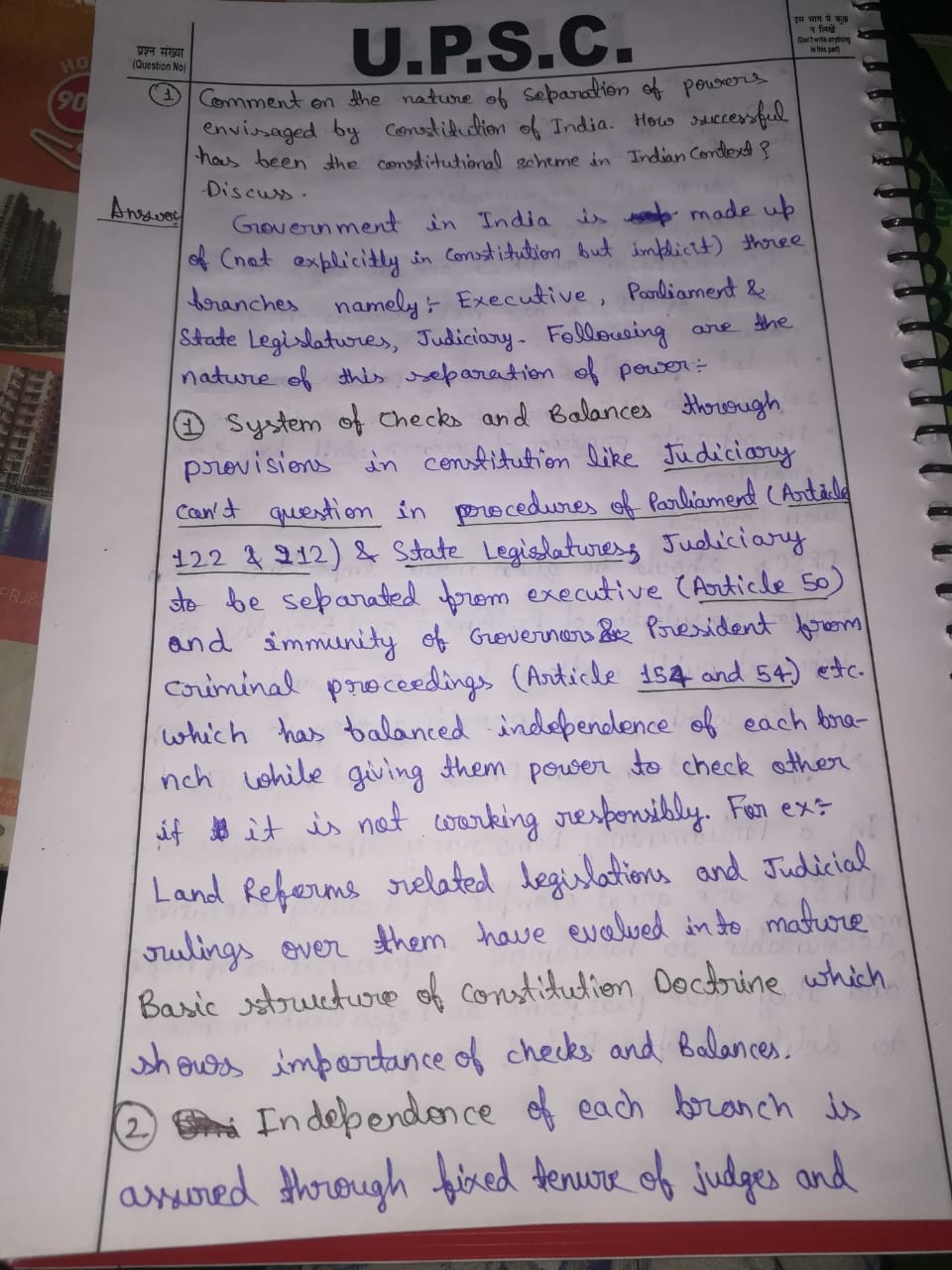 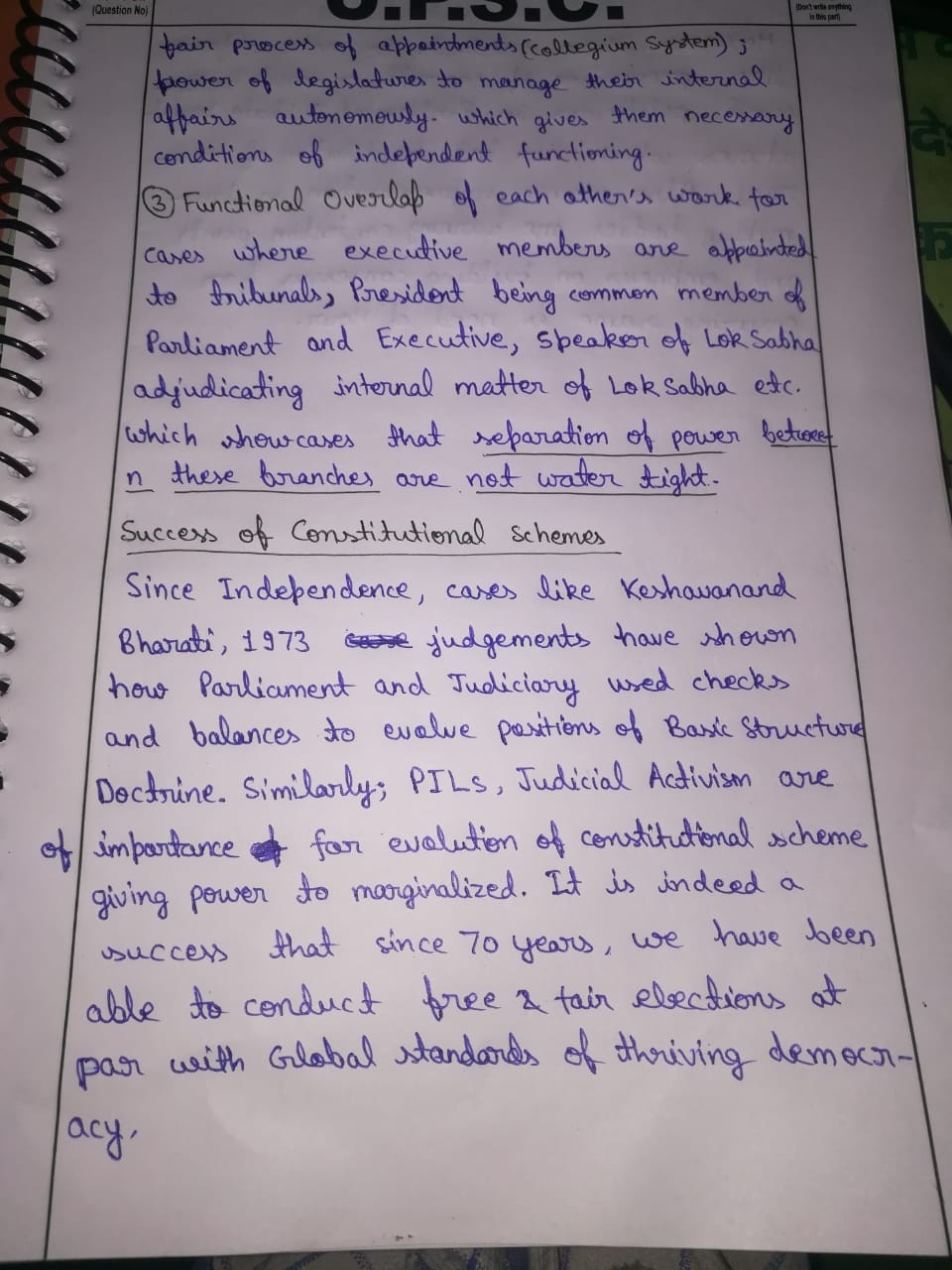 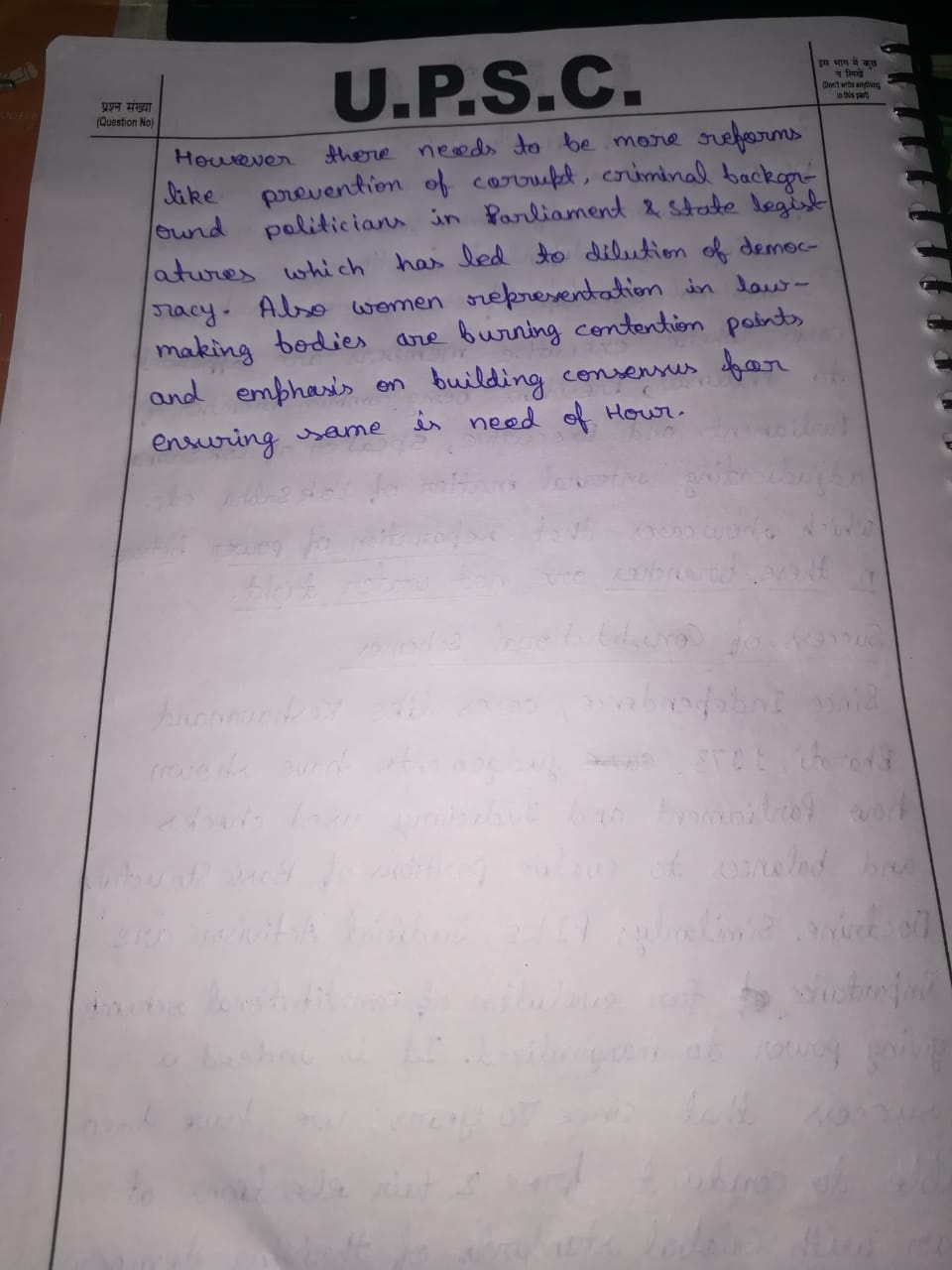 Hi Prafull…You have really worked to gather some information for this answer…However, there are some points to be noted…
-Introduction is very poor…an immature one….Its not Government rather Governance (need to be more careful while using words)…It is the function which is separated and not the power….there is no watertight separation mentioned anywhere in constitution………It seems you have repeated the question in introductory para…
-Continuous sentences with too many ideas in one sentence are like confusing one…so need to break the sentence…Don’t join 3 or 4 or 5 sentences together by ‘and’, ‘or’, ‘semi-colon’ etc…form simple sentence containing max 8 to 10 words…
-In the 1st point itself…Art 122, 212, 154, 54 etc. are there for maintaining the supremacy of institution and its functioning…Such provisions no where gives checking powers…so these certainly not be counted as SoP….Yes Art 50 separates the functions of executive and judiciary for sure…
-Your heading no. 1 is ‘Provision of check and balance’, but within content there is no evidence of Check and Balance…
-Under the heading ‘Success of Constitutional Schemes’ you have mentioned philosophical ideas instead giving apparent examples…Its like killing your word limit…
-Conclusion is poor as well…How election ensures separation of power? here there is absence of clarity…Concluding remark in the third page is completely different from the topic asked…
Overall an average answer…You can present more better answer…hope in next attempt…
Good attempt…keep writing…
Marks awarded: 4/10 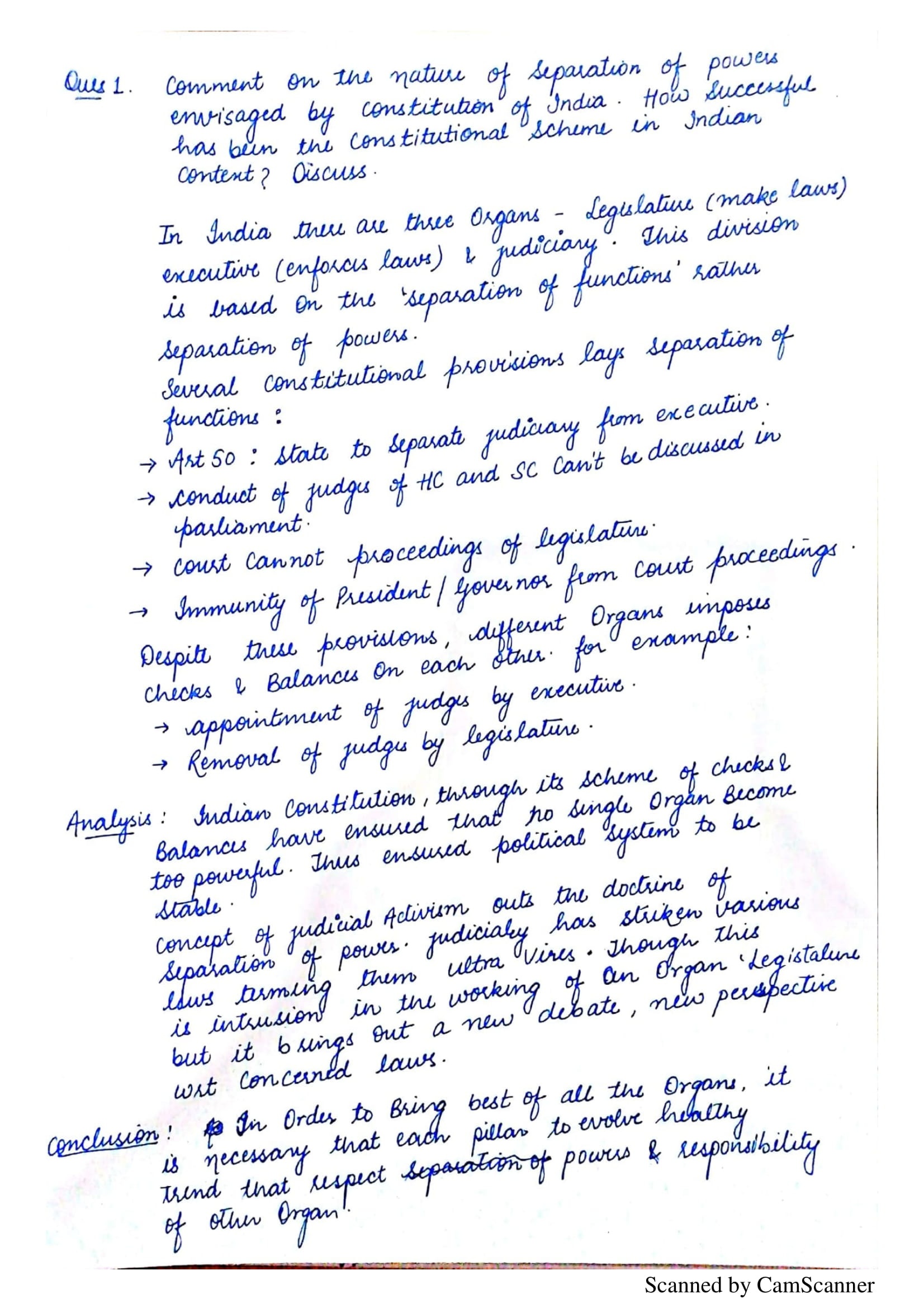 Hi…
Your introduction seems to be very poor…and incomplete…
-1st you have mentioned the function of legislature and executive…but why not for Judiciary…? shows hurriedly written your answer…
-Points and ideas are jumbled and mixed up….arrangement in ideas and points lacking…clarity in presentation is not there…
-You need to explain about SoP…and then what kind of SoP does India have….Its more a kind of check and balance…
-Conduct of judges, immunity of Prez, Guv etc…these points are more suitable for establishing supremacy of institution and post and certainly not be Separation of Power…
-Some of the points are incomplete with incomplete sentences….
-Answer lacks examples…
-Question asks about the comment…so using the word analysis is not appropriate…
-Under Analysis…1st point need justification…
Overall you require more of conceptual clarity regarding the topic…
Conclusion has no meaningful idea..an empty one…
Suggestion:
Give more stress in research and development…and then frame answer…
However…a good attempt…You certainly have the potential to improve…keep writing… 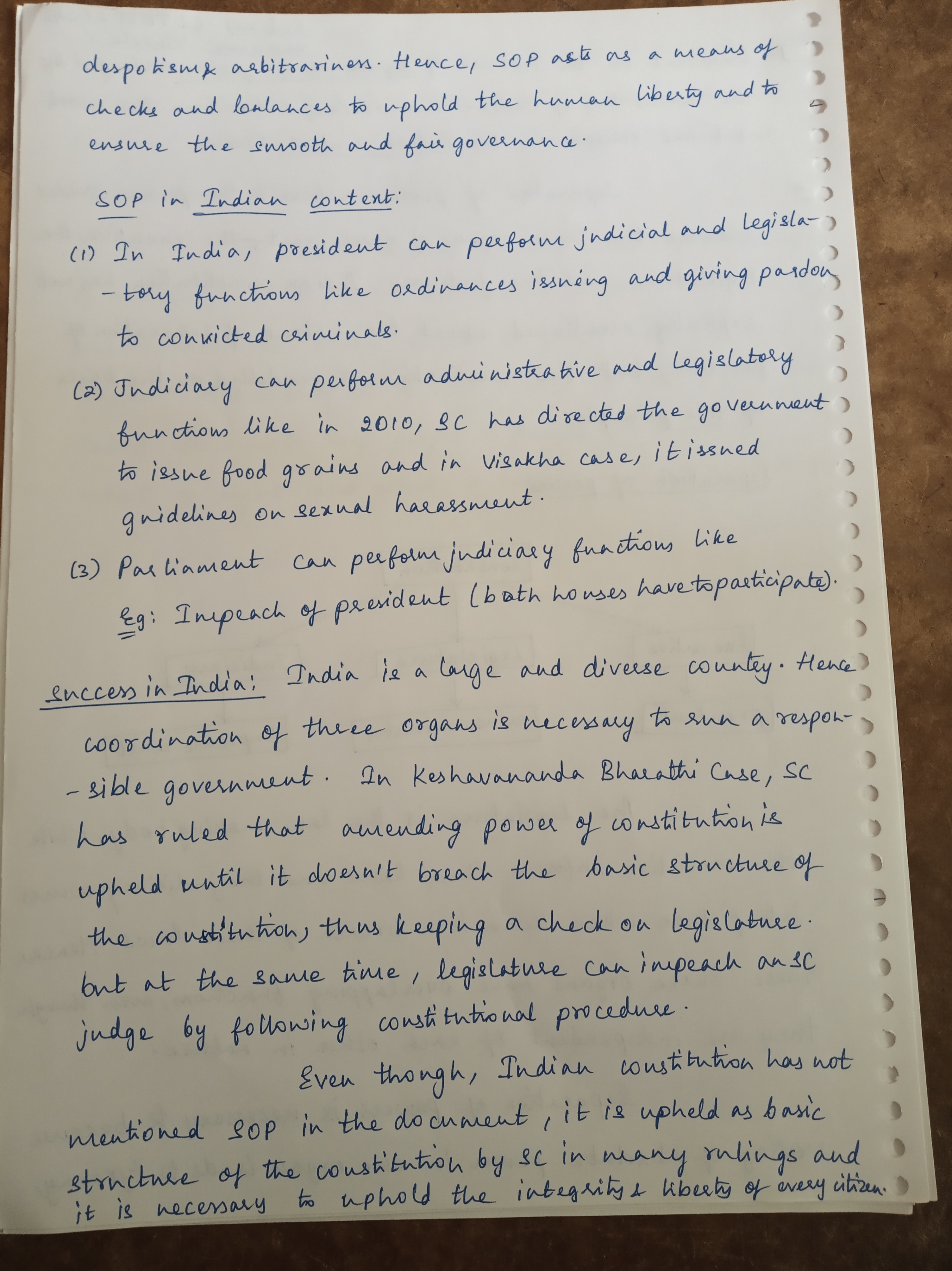 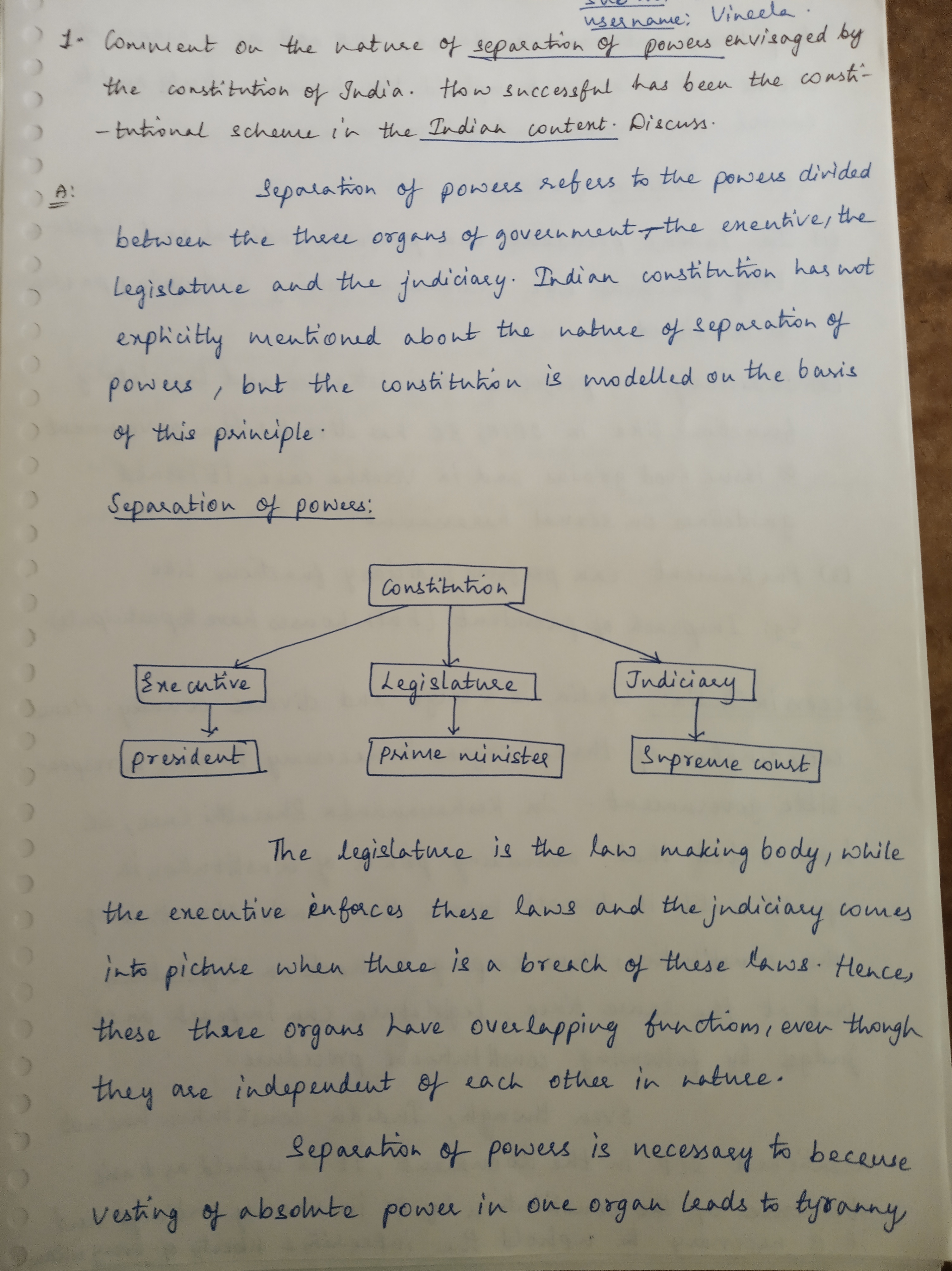 Hi Vineela…
-You have provided a very good introduction….
-However, need to differentiate between powers and functions of these three organisations. Here ‘Function’ is what implicitly separated and not the power…Hence a bit of clarity in 2nd para is needed…
-Under the heading…’SoP in Indian Context’ clarity needed. The finishing line should and must talk that its more a kind of check and balance rather separation. Its more a kind of polarity than strict classification….
-The rest of the points are good with a brilliant conclusion…You definitely have clarity of thought on the topic…
-Overall good approach…Keep writing…
Marks awarded: 6/10

Thank you so much sir. 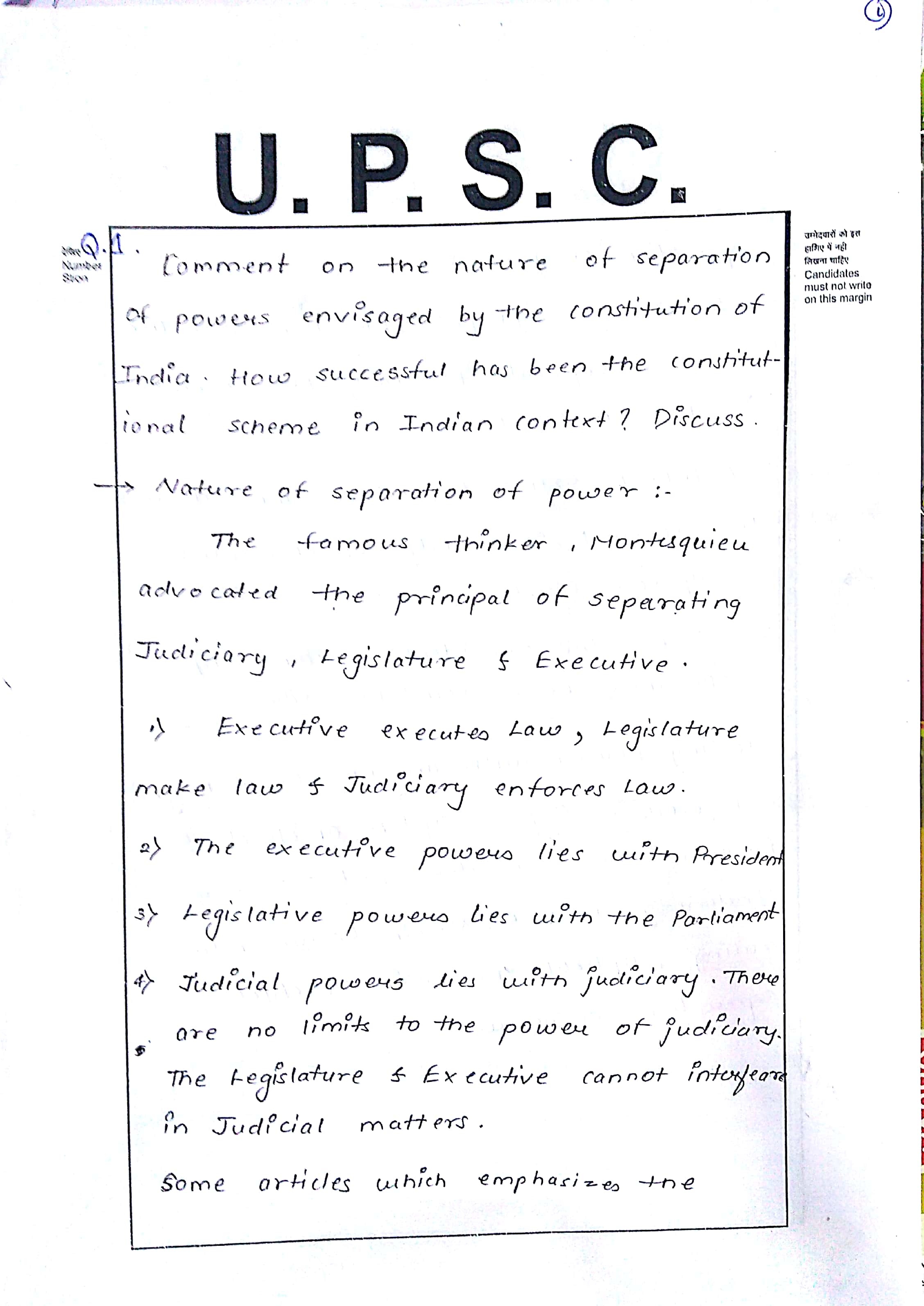 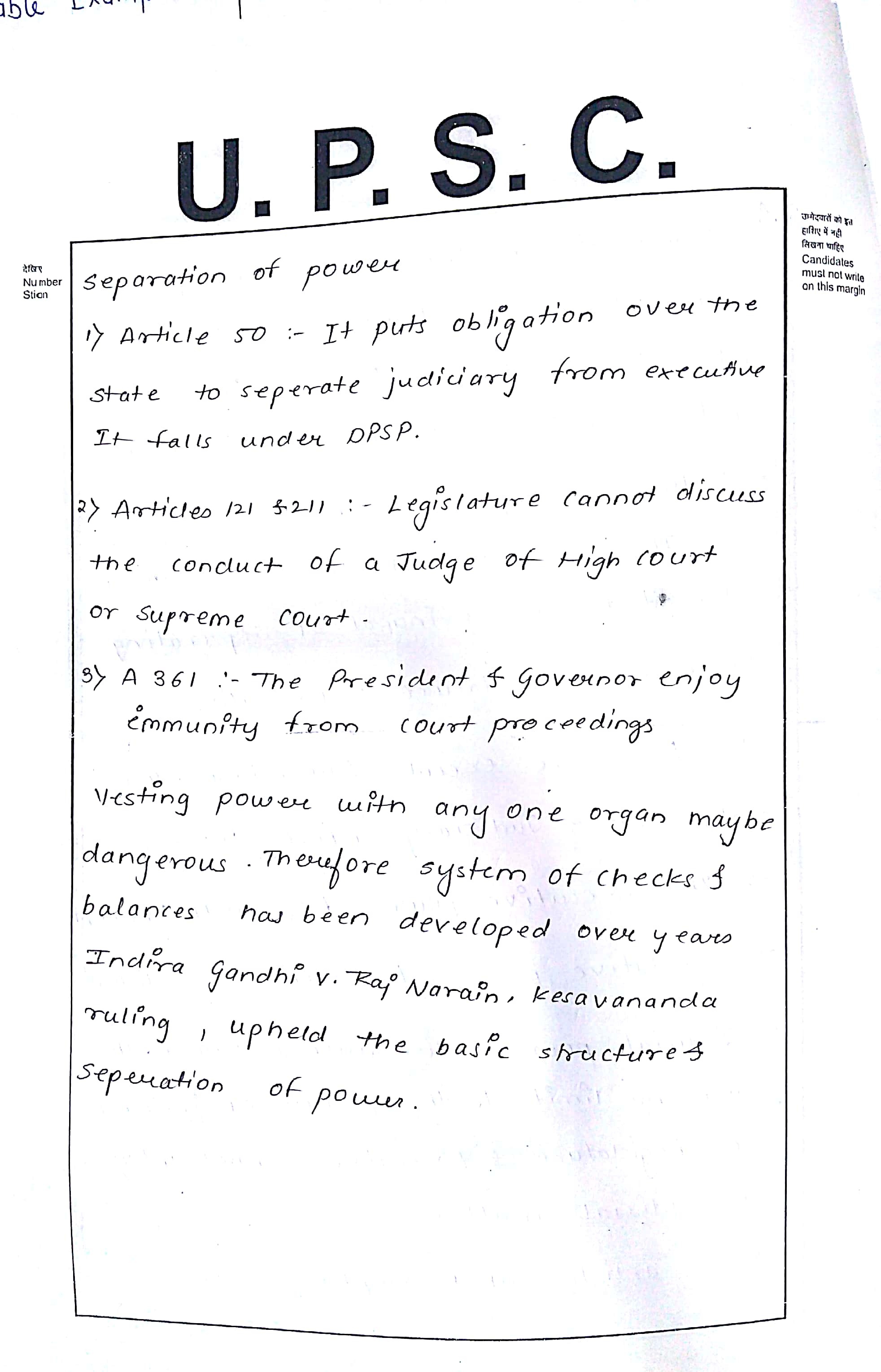 Hello Shruti P…
-You have not provided any introduction to the topic…You need to mention about the essence and meaning of SoP…rather wasting the word by mentioning about Montesquieu…
-Individual points are incomplete…and hence does not provide complete idea…also there lack the linkages among points…
-You certainly require…conceptual clarity regarding the topic…Its more about check and balance rather SoP…also Judiciary has certain limitations…regarding its powers…and executive and legislature do interefere….Such points indicates lack of conceptual clarity….
-In the 2nd page point no. 2, 3…these article are more about establishing the supremacy of institutions and certainly not come under SoP….

Overall You attempted good…can certainly improve in next few answers….its a matter of practice…keep writing… 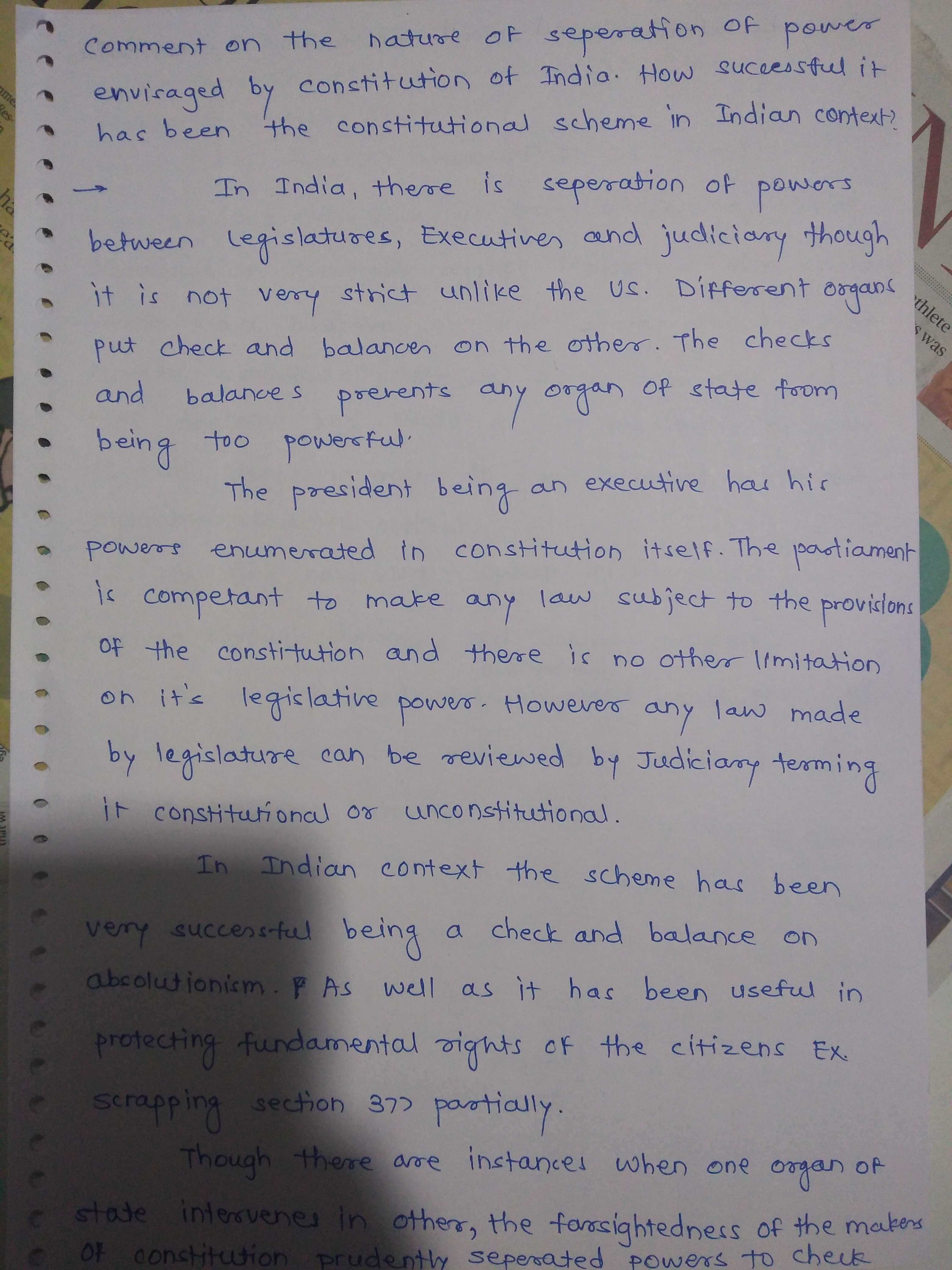 Hi… Xshay Anil Wakhare
-Introduction is poor… need to be very careful while using words…it should be ‘like the US’ and not ‘unlike’ as mentioned…here we need to mention the essence or meaning of SoP…and the type India practices…
-Under 2nd para…your points have no weight…bring some article like Art. 50…and other one…lacks example…
3rd para…there is no evidence for the scheme being successful….also the example mentioned is incomplete…
-Ideas in conclusion is good…but need arrangement…
Overall average attempt…need to bring more focus on question…keep writing…
Marks awarded: 3/10 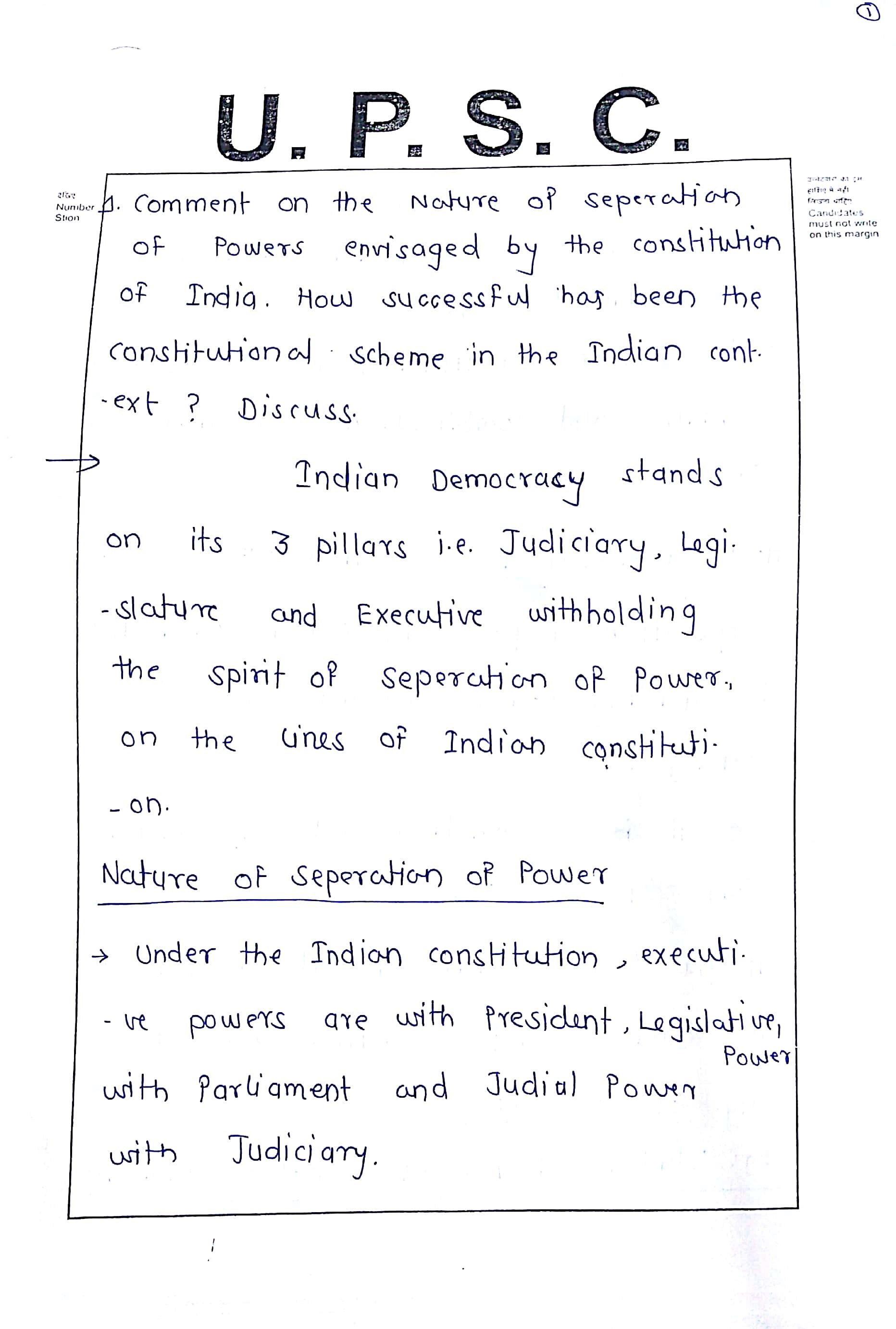 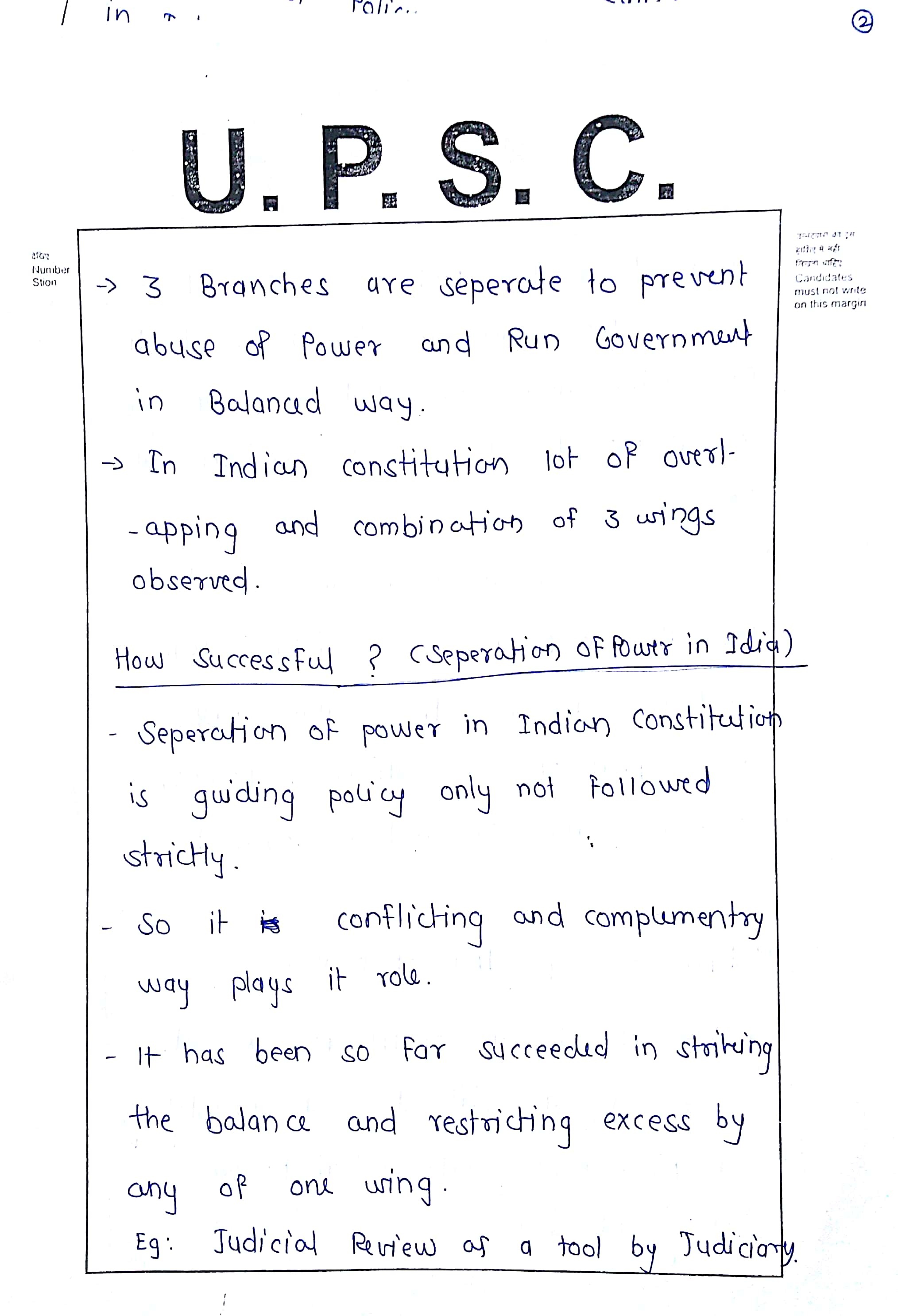 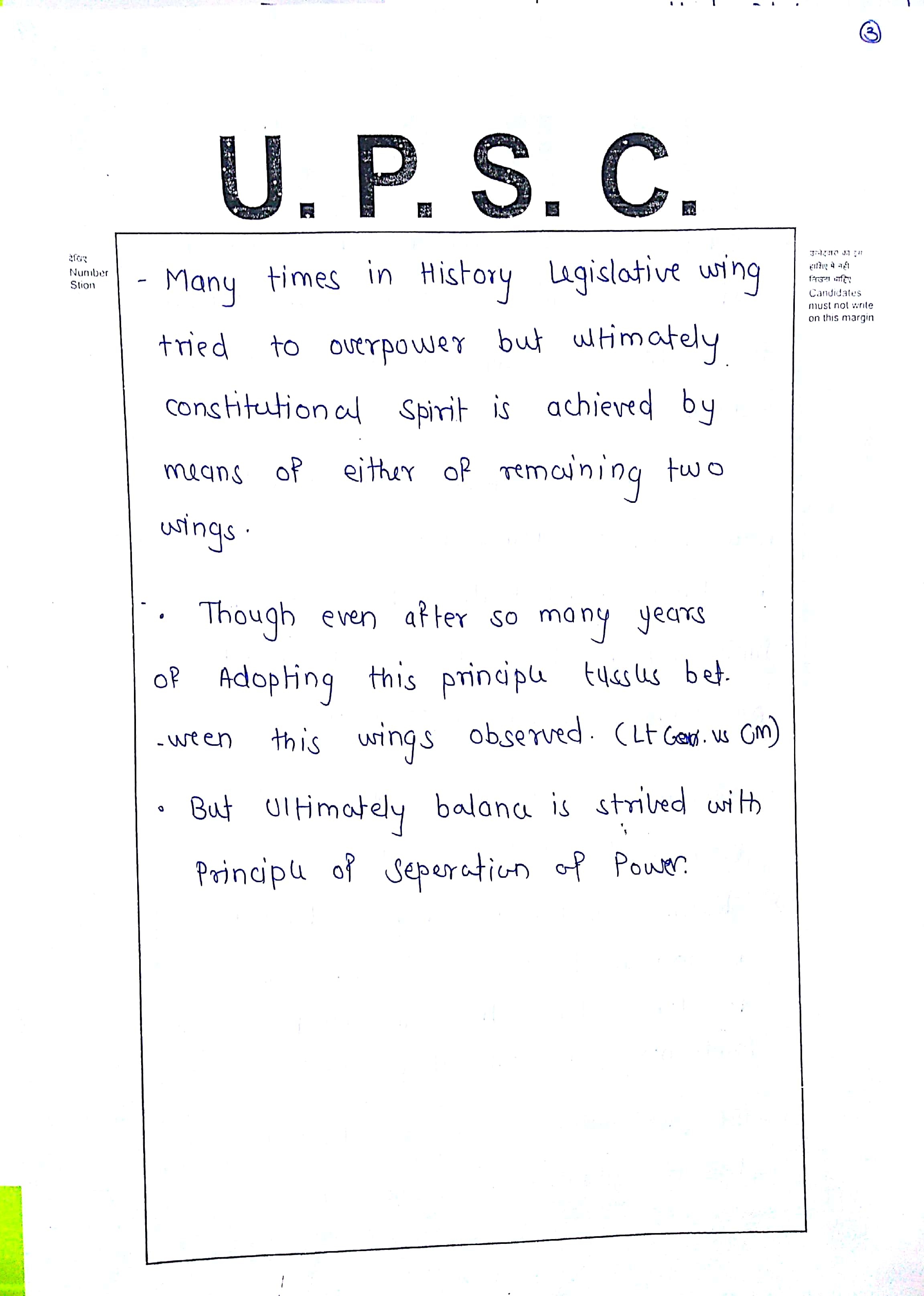 Hello Harshal Deore…
-1st of all the introduction provided by you is very poor…The provision of separation of power is nowhere explicitly mentioned in our constitution and hence it would not be appropriate to say that SoP is on the lines of Constitution…
-It should directly be mentioned here that its more or separation of function. Its more a kind of check and balance rather strict classification…
-2nd page…1st para…its not a watertight separation…immature idea…
-Under heading….’How Successful? (SoP in India)…The 1st para indicates that you lack in conceptual clarity…We do have SoP but with the context of Check and Balance…
-3rd point under the same heading, You are talking about stricking the balance…Your points itself gives contradictory ideas….
-Language is too poor…Too many mistakes in sentence formation….
-Also there is no linkages between the points…
-However, you tried with a good attempt…but you need to have more of conceptual clarity regarding the topic….
-Overall its a below average answer…
Good attempt…keep writing…
Marks awarded: 2.5/10 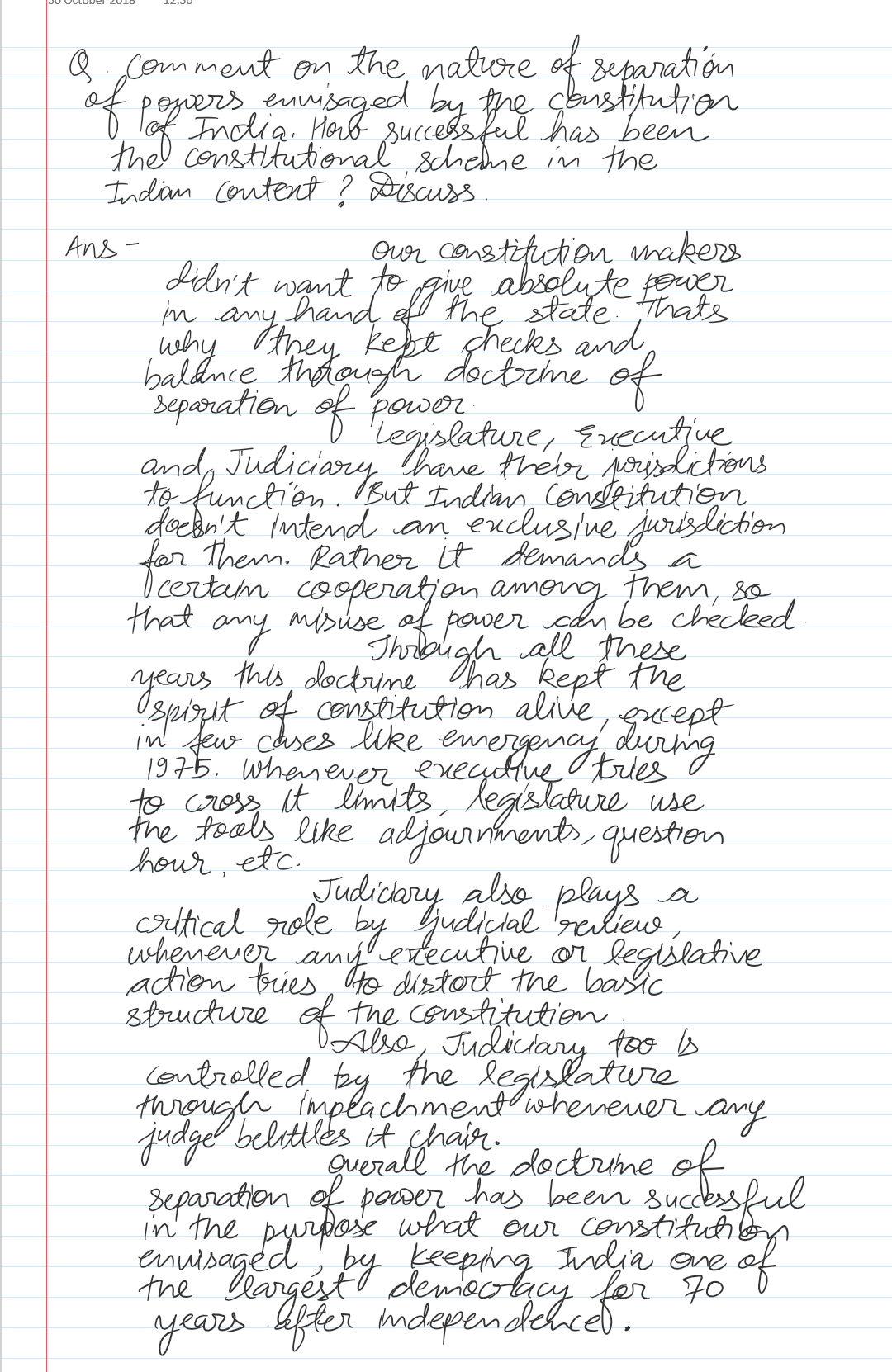 Hello Hiddenwarrior…
Your answer is good…(only good)…Keep few things in mind as mentioned below…
-1st sentence of the introductory para seems to be incomplete…Here justification needed…(why Constitution makers did not give absolute power?)…Though the 2nd sentence is a good one and complete…
-Ideas mentioned in other paras are good but devoid of examples…You must show evidence (example) to prove your point…
-Examples like…striking down of NJAC, bringing amendment in certain provision/law which is/are declared unconstitutional by Judiciary, inclusion of IXth schedule…etc…
-You may also mention some of the famous cases if recalled…this will boost your marks…
-Examples brings completeness in your answer and must be considered…
Overall a good approach and good attempt…
Marks awarded: 4.5/10

Suggestion:
Use plain sheet instead of ruling one with proper margin for writing answer…after all this practice will generate your habit of writing…Keep writing

thanks a lot sir…

And also give oped for referance so that one can built content from it.

Pls give directions along with question so that it will be easy for everyone to write answer including new comers like me. I am willing to purchase just add Directions

Hi Invincible…
-Introduction seems to be Okay…Okay…though Idea mentioned is good one. Need to bring more convincing idea or reason…
-There is grammatical mistake in 2nd para…which should be taken very seriously…(has…did…)
-The ideas mentioned in 2nd para is incomplete as such idea is no where mentioned in Constitution…except Article 50 (that too for Judiciary and executive)…This statement is like feeding false information…
-Para 1 and Para 3 talks about the same thing in different words…its repetitive and must be avoided…
-There is significant difference in the meaning of words like un-constitution and anti-social…Need to be cautious for using words while conveying ideas…
-Examples in 4th para are incomplete…We should feed complete information or the sentences should be complete in itself…

Suggestions:
-Overall its a very below average answer…you have the ideas but need to learn the way of presenting your ideas…
-Use Proper blank sheet for writing answers…with proper margin…
-Sincerely work on your handwriting…
Very positive attempt…Keep writing…