The answer is both traditional as well as current based. You have to provide the role of diplomacy in recent times which has averted international crisis by bringing peace in those situations.

Doklam crisis, summits between Korean leaders, Trump-Kim meet, diplomatic relations between US and Cuba, negotiations between Afghanistan govt and Taliban etc are some of the recent examples which you have to discuss.

At the same time, do give some examples of post WW2 diplomacy which helped in providing solutions to long time military crisis in the world.

To score better, provide a discussion on the challenges that diplomacy is facing in maintaining peace in this fast paced and ever changing relations between major players of the world.

Examples of recent diffusion of crisis through diplomacy: 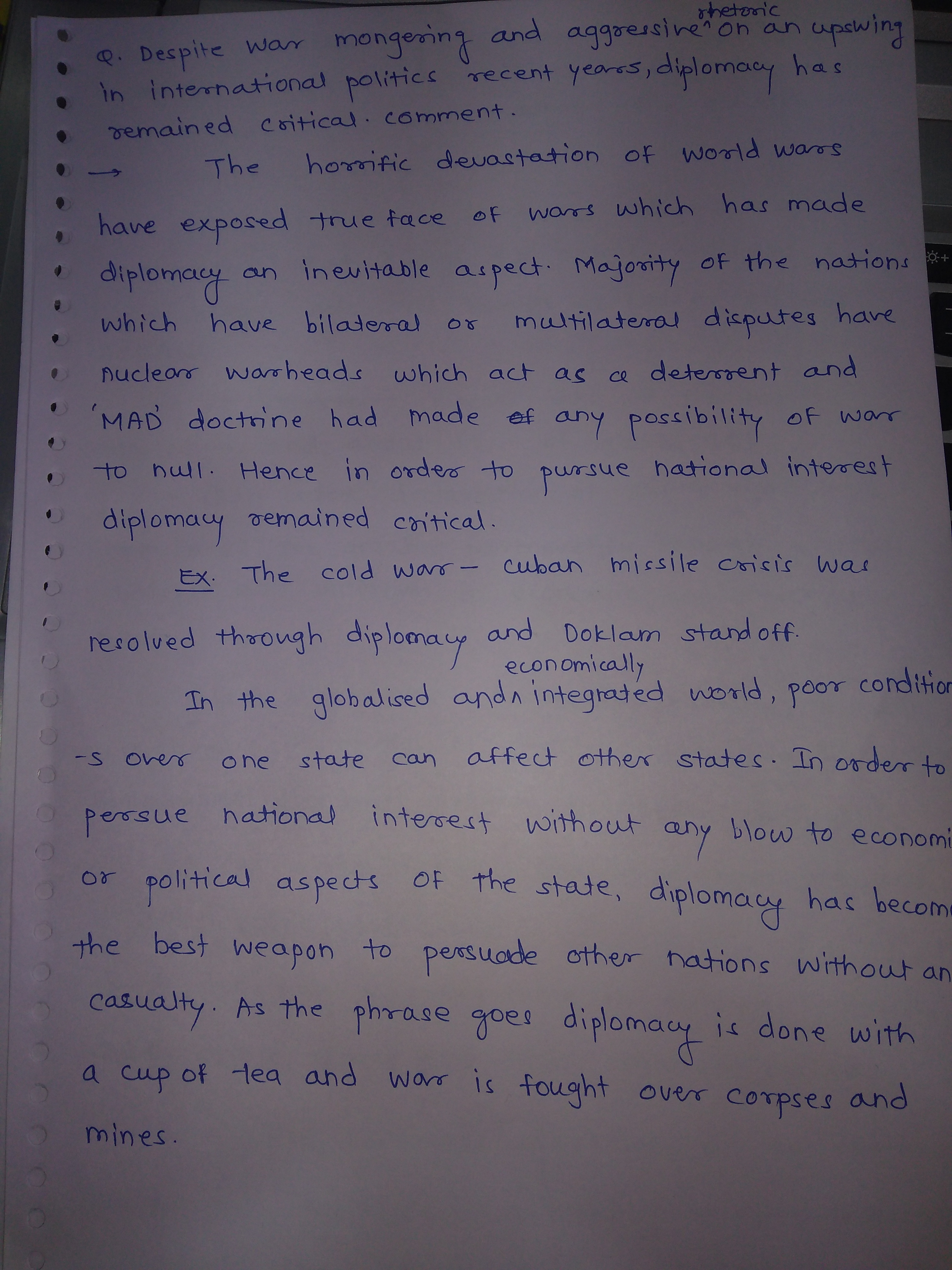 Hello…Xshay Anil Wakhare
-Your points are good…but it seems you have not read the question carefully…the question demands criticisms…so with these positive points you must mention some criticisms as well…
-You have only mentioned the positive of diplomacy and not a single point of criticism…
Good attempt…focus on the question…always repeat the question while attempting answer…
Nice approach…keep writing…. 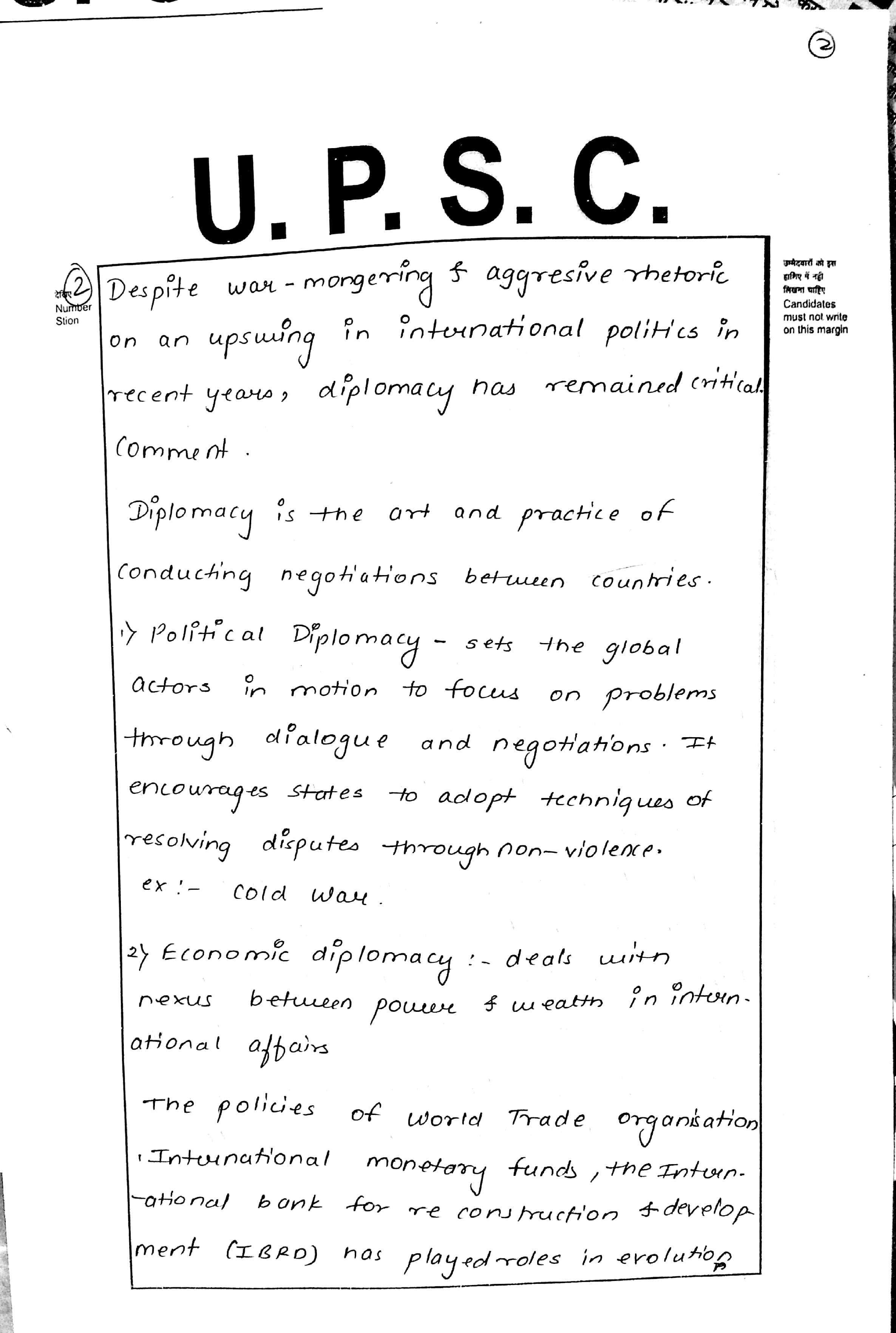 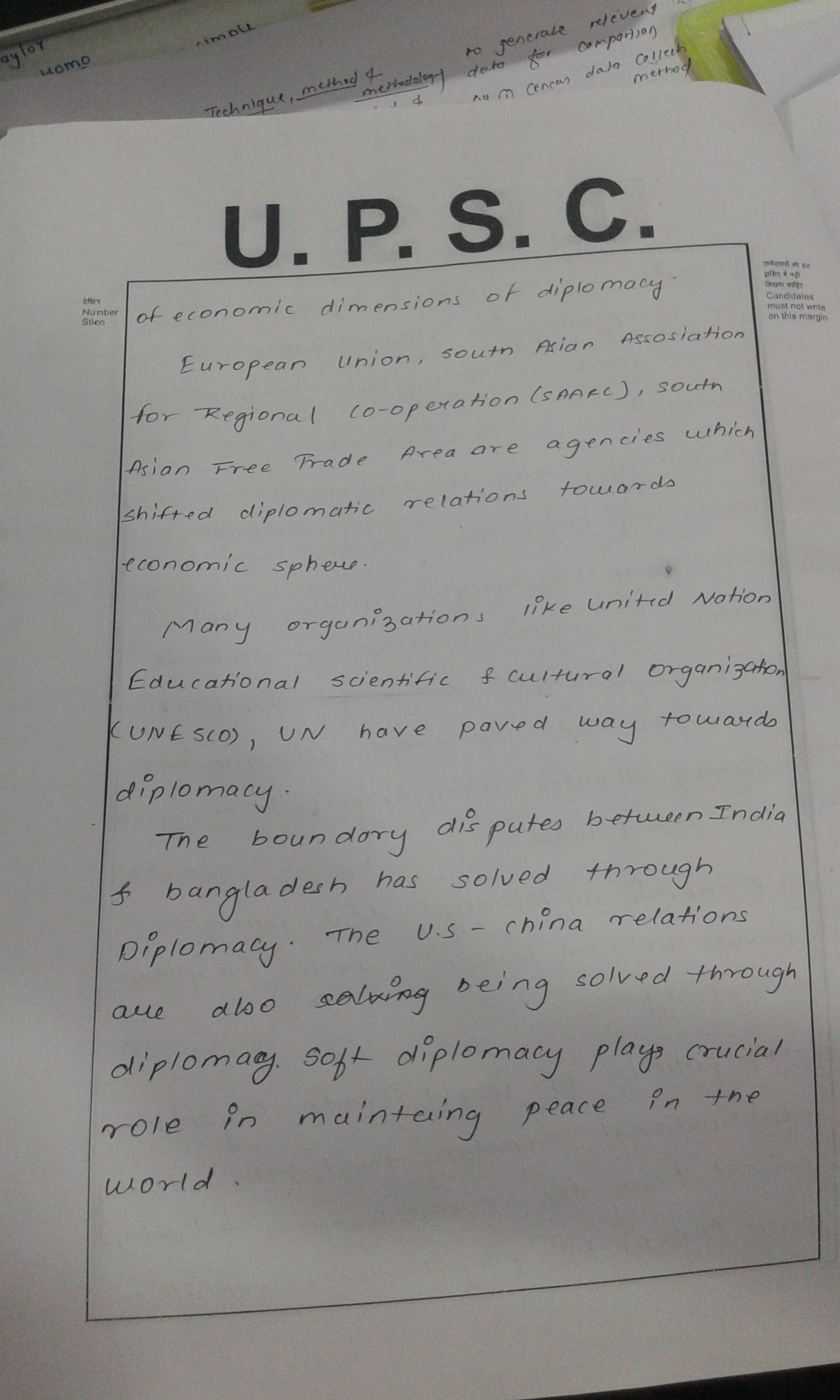 Hello…Shruti P…
-No need to mention the type of diplomacy…like political, economic etc…introduce directly…how critical the diplomacy have been…mention how diplomacy failed in some occasions…its disapproval in some occasions…
-You are only talking about diplomacy in international organization….what about the diplomacy in bilateral and multilateral relations…?
-Critical means talk about its disapproval…
-There is no conclusion in your answer….
Overall nice attempt…keep writing…refer some of the answer reviewed…or our model answer…
-Need more focus on question…keep writing…. 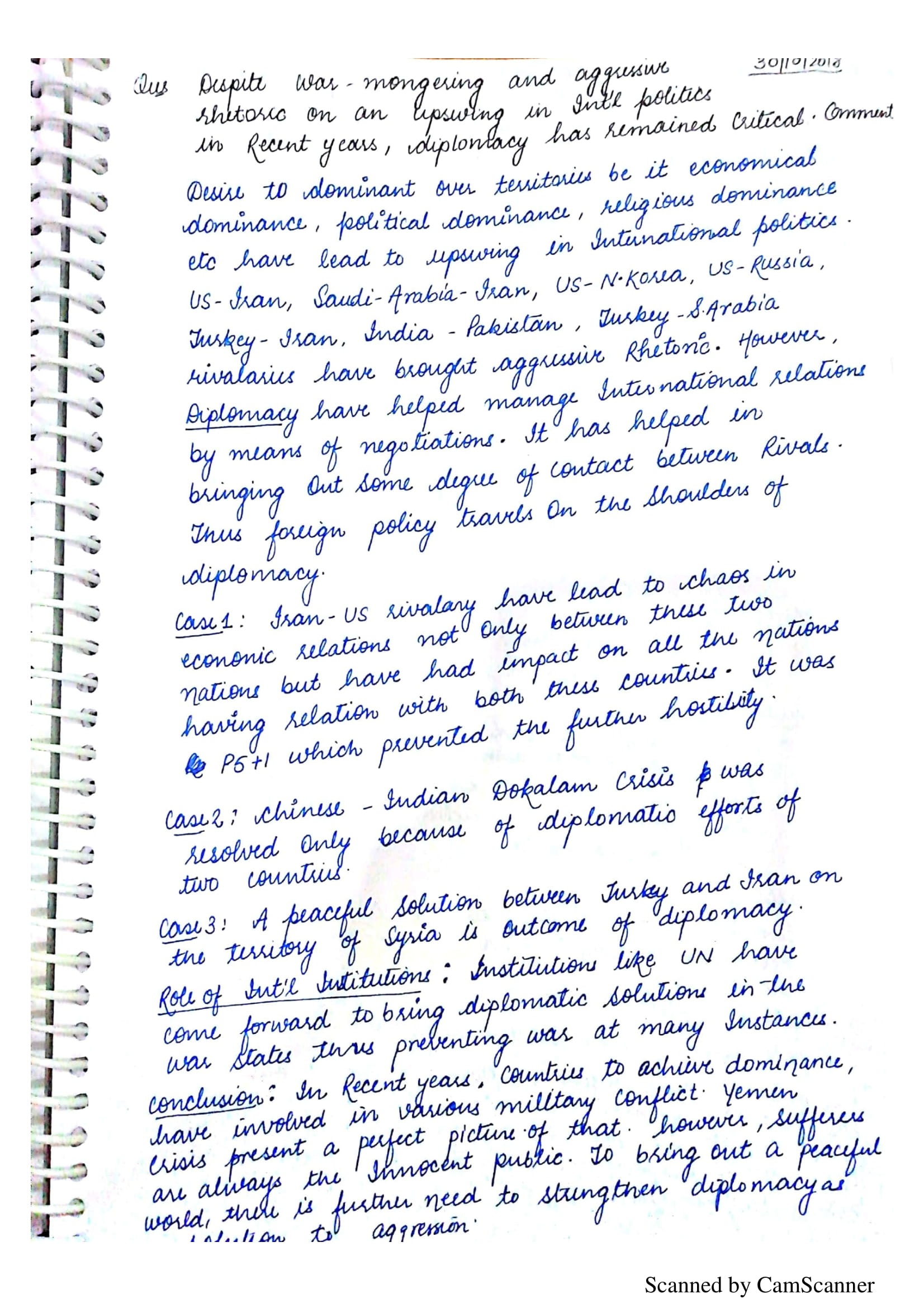 Hi…
-Points mentioned are good but need to show more criticality of diplomacy in your points…show with example that it has been critical at some times and failed on some occasions…bring challenges to show criticality…
-Rest of the points are good…keep writing…
Marks awarded: 4/10 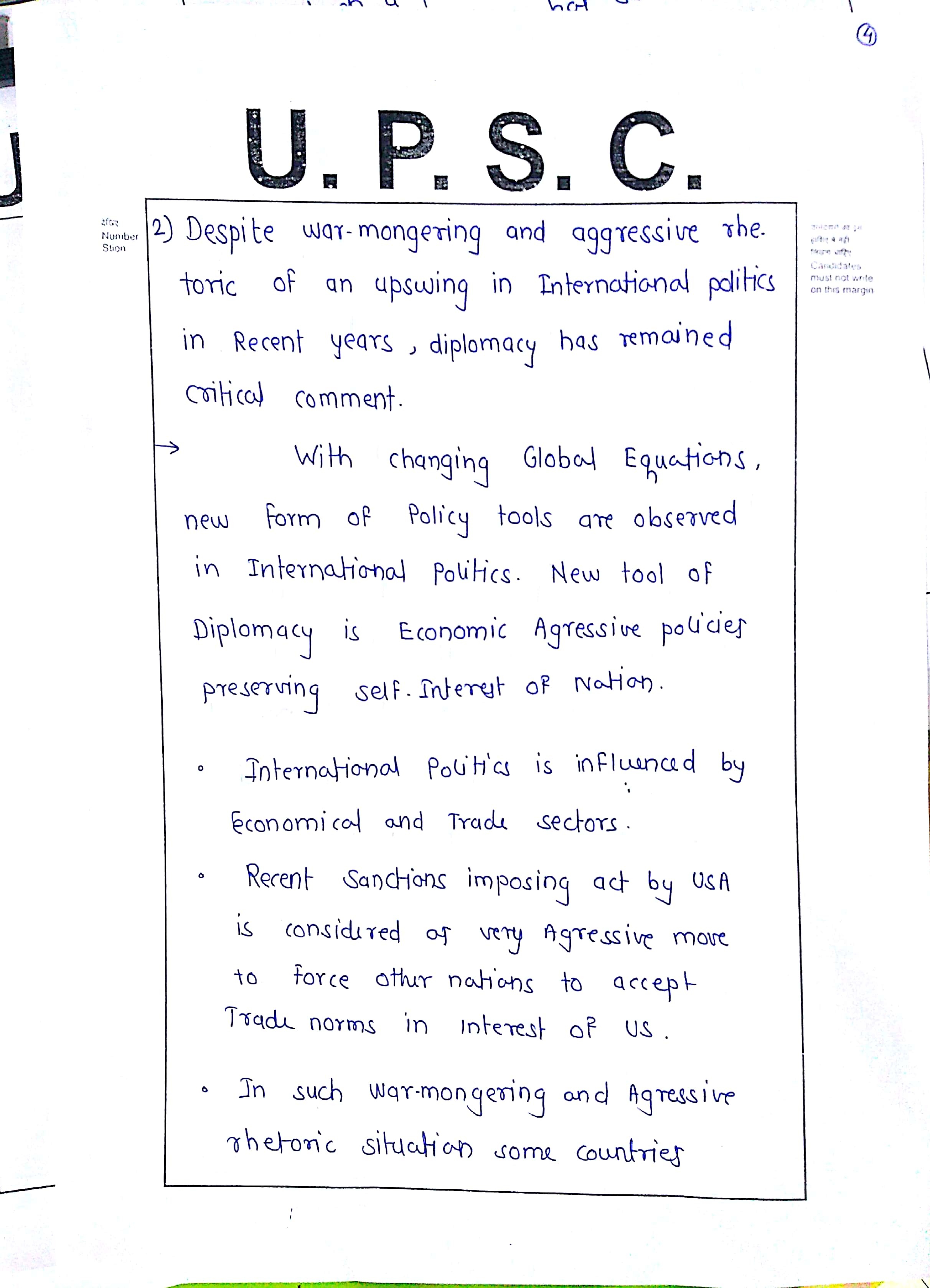 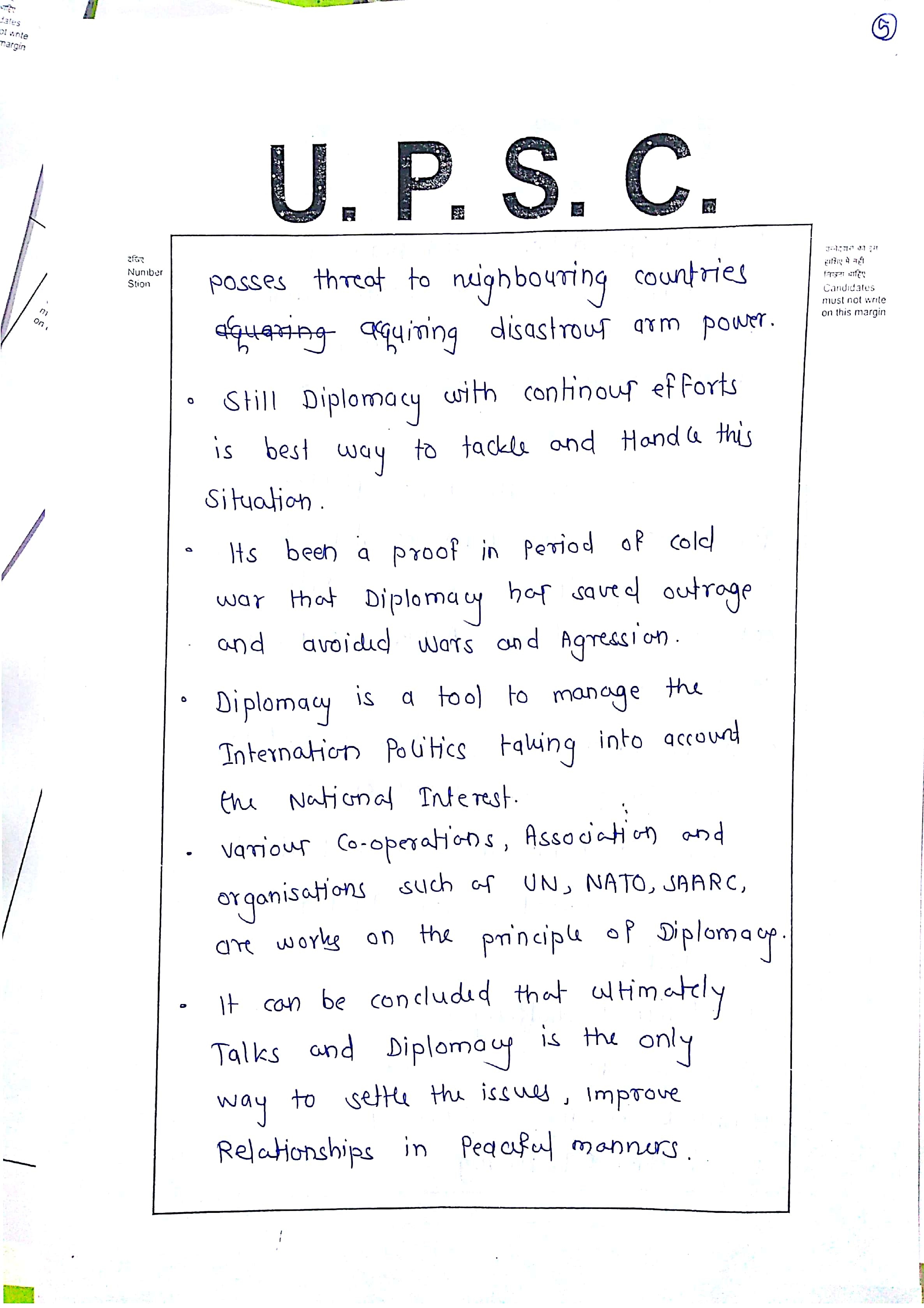 Hello… Harshal Deore
-Your introduction is good…with logical ideas in points…However the points should first mention about the gains which are acquired through diplomacy and then its criticality should follow…
-Point 3 on 1st page…don’t repeat the words of question…It shows you lack in vocab or word collection…
-Your points are only criticism…it should be both…positive as well as negative (criticism)…
-Point no. 4 on 2nd page there is grammatical mistake in sentence formation…such mistakes should be taken seriously….
-Try incorporating more examples…like US-North Korea, Afghanistan, Iran, Indo-US etc…More example as more evidence will certainly enhance marks….
Try connecting your ideas and points together…like…1st followed by the 2nd and 2nd by 3rd and so on….
Bring more points in conclusion…
Overall a good attempt…and nice appraoch…keep writing…
Marks awarded: 4.5/10 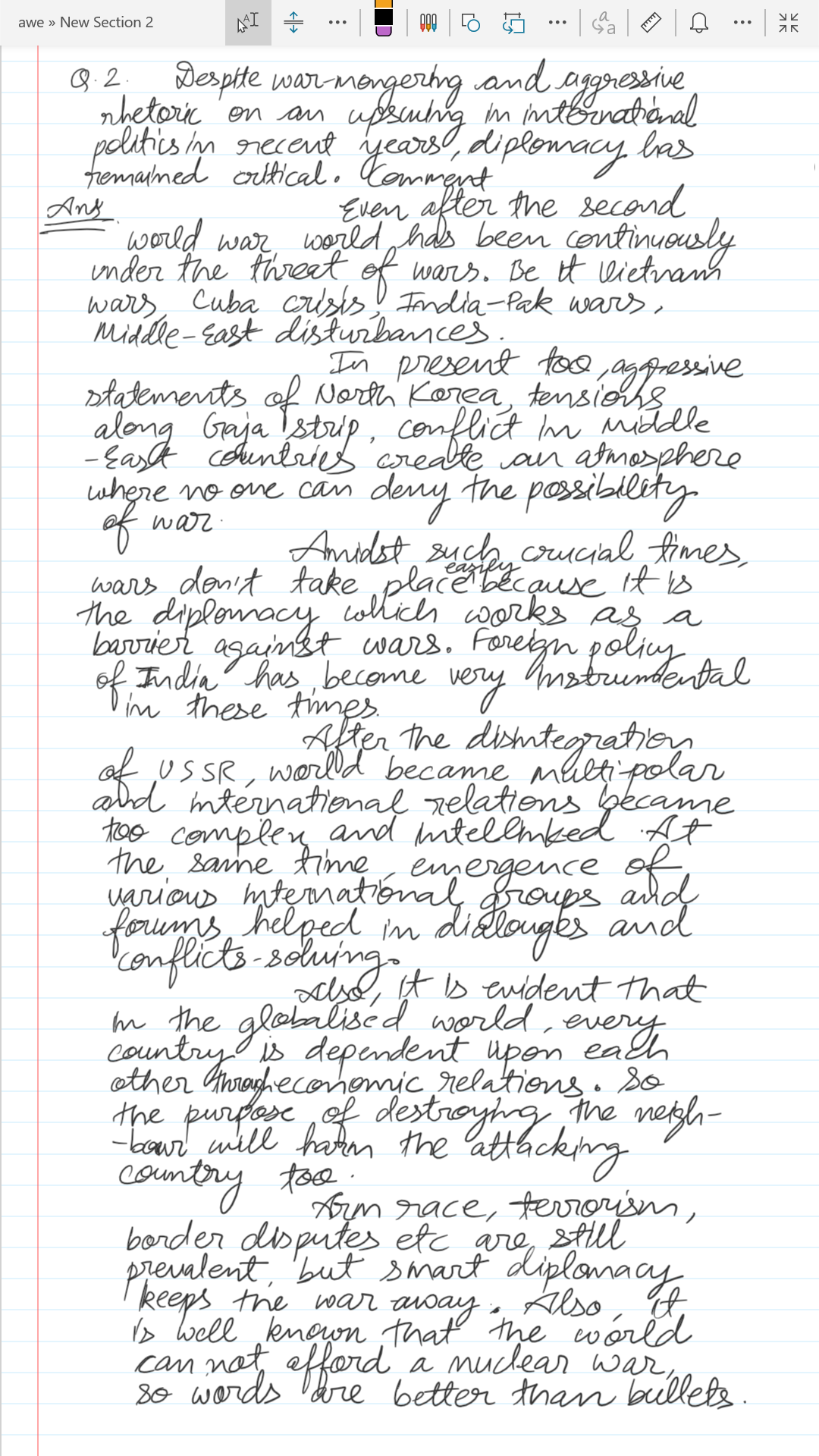 Hi Hiddenwarrior…
-Introduction is incomplete…Mention…It might has been under continuous threat…but diplomacy played its greater role in avoiding many war…however, there are still something which diplomacy lacks…etc.etc.etc…
-Means in simple sense…bring positive points about diplomacy…and then criticize it or criticize by mentioning challenges etc…
-Diplomacy has some limitations and hence it failed in many occasions…show challenges…Such points should be mentioned in 3rd para to counter the ideas mentioned…
-We need to criticize the action of diplomacy…and how it failed in some occasions…follow the sequence of the question…read question carefully…
-Need to bring more examples….
-Add more points in conclusion…
Overall a good attempt…keep writing…
Marks awarded: 4/10

Hello Invincible…
-Your answer is not in proper format….work in your handwriting…use plain white sheet to write answer….
Your answer has no criticism…You have only mentioned the positive points about diplomacy…but at the same time you need to criticize it as well…talk about the challenges…limitation etc. which restricts diplomacy…
-Conclusion is not in paragraph…
Focus on format and question as well…
Good attempt….keep writing…certainly will improve…
Refer some of the best answer reviewed…