The questions comes from the topic Salient Features of World’s Physical Geography. Its straight, to the point and nothing hidden in the question.

The first part of the question will address the concept and characteristics of IOD.

Then jump to the next requirement of the question where you have to discuss the role of IOD in Indian monsoon.

Here discuss the role of + IOD on normal rainfall, – IOD on drought like situation. Dont miss the relationship between IOD and El-Nino and how it affect each other.

One of the best way to score in these types of questions is to draw a diagram to show the phenomenon. It will be relatable to the examiner and you will score easy marks!

How does it impact the southwest monsoon? 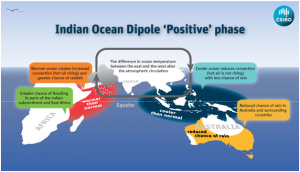 The cumulative effect of these factors along with ITCZ, absence of  Sub Tropical Westerly Jet (STWJ) is that a low pressure is created over the Indian subcontinent while a high pressure is formed in the Indian Ocean. This pushes the moist, rain bearing monsoon winds from the Arabian sea towards the subcontinent. The blockage of these winds by Western Ghats causes rains in the southern region while that by Himalayas leads to downpours over North India. 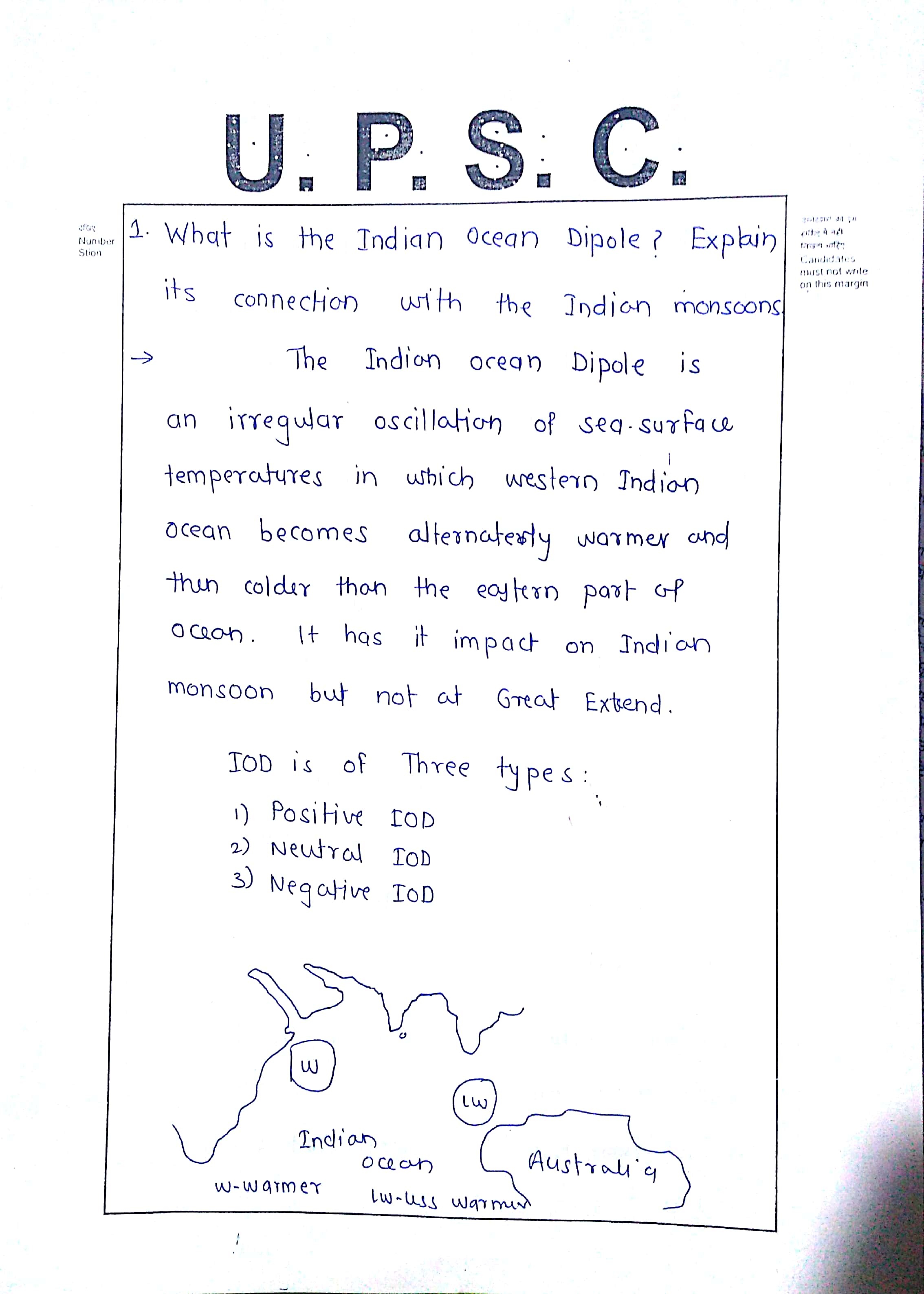 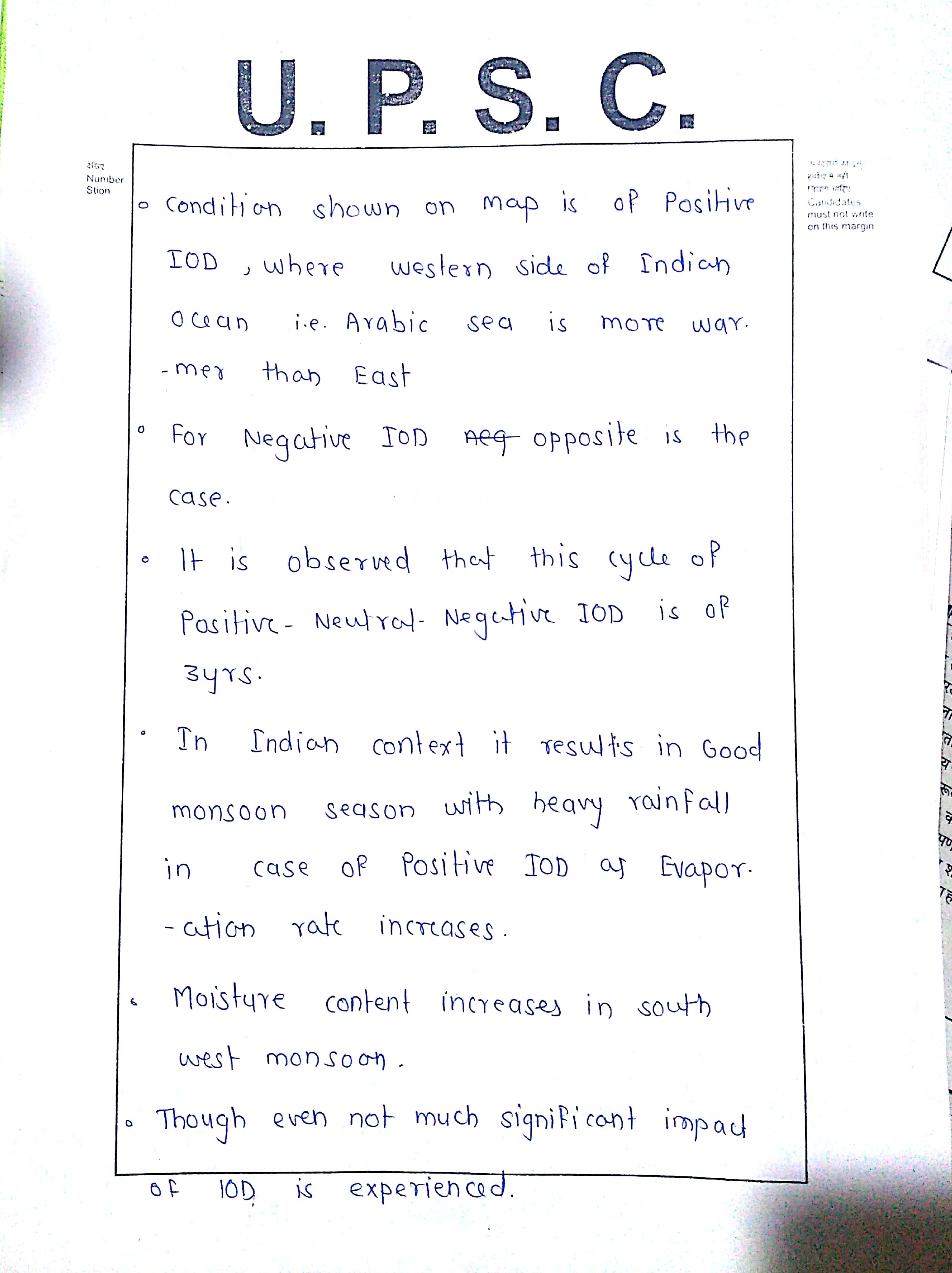 Hi Harshal…
-Introduction is incomplete….IOD is not only oscillation in sea surface…but the temperature difference in ocean water (more or less than normal) affects the air circulation in atmosphere…this entire cycle in known as IOD…
-You haven’t mentioned much about its connection with Indian monsoon…only the 3rd last point talks about it that is also info…and not explaining in details…
We don’t need to discuss the type here…focus more to the demand of the question…
-There is no conclusion in answer…

However, You attempt is good…keep writing will improve for sure…
Marks awarded: 2.5/10 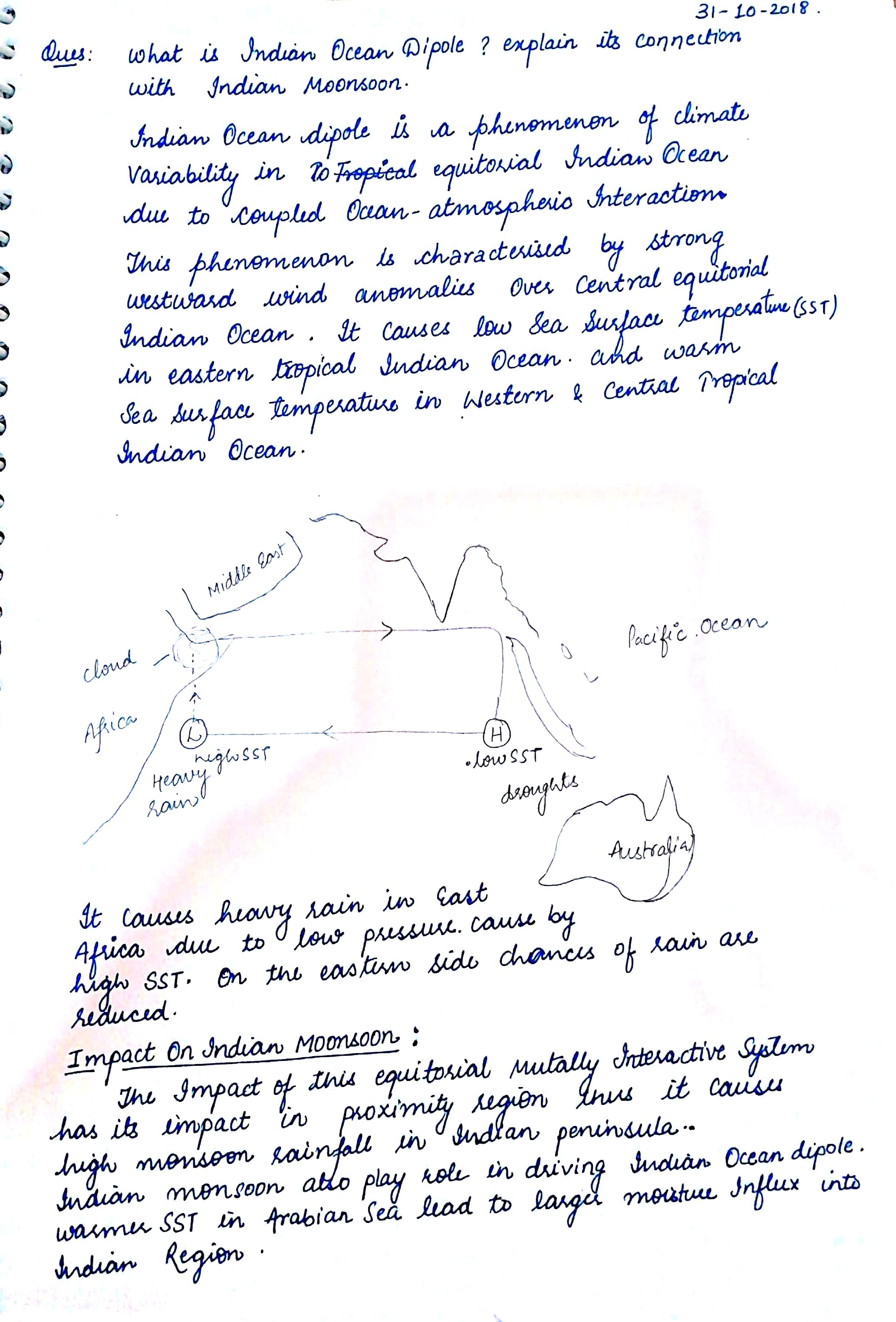 Hello CD0705
-The answer is incomplete….You have mentioned in intro itself that its an atmospheric phenomena….however the following line does not mention how it affects atmosphere….monsoon etc…
-Also need to mention how it gets affected or affects ENSO…
-Its impact on Indian monsoon….idea mentioned here need more justification….
-No conclusion…
Overall its an below average answer….
Good attempt…keep writing…
Marks awarded: 2/10 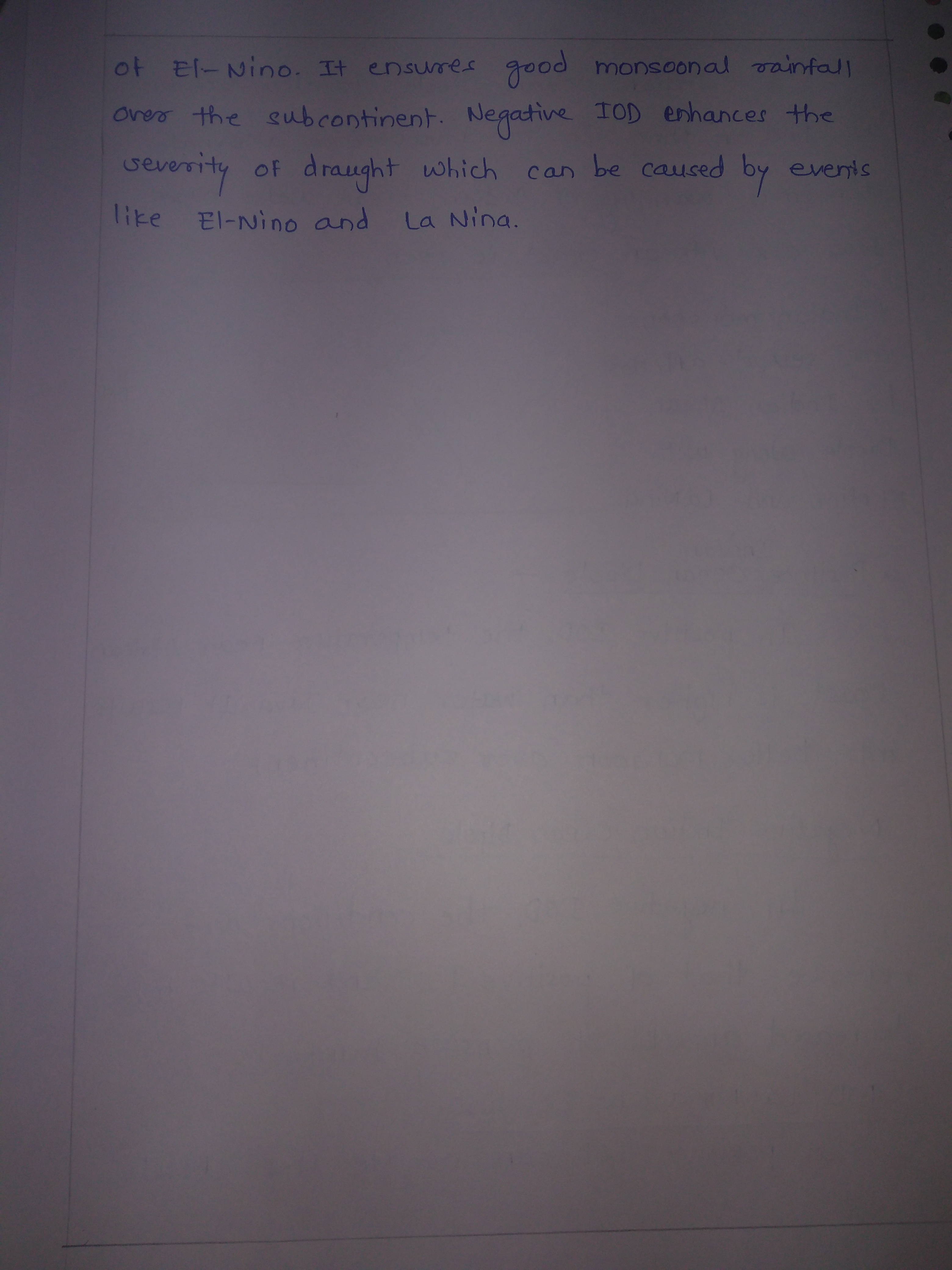 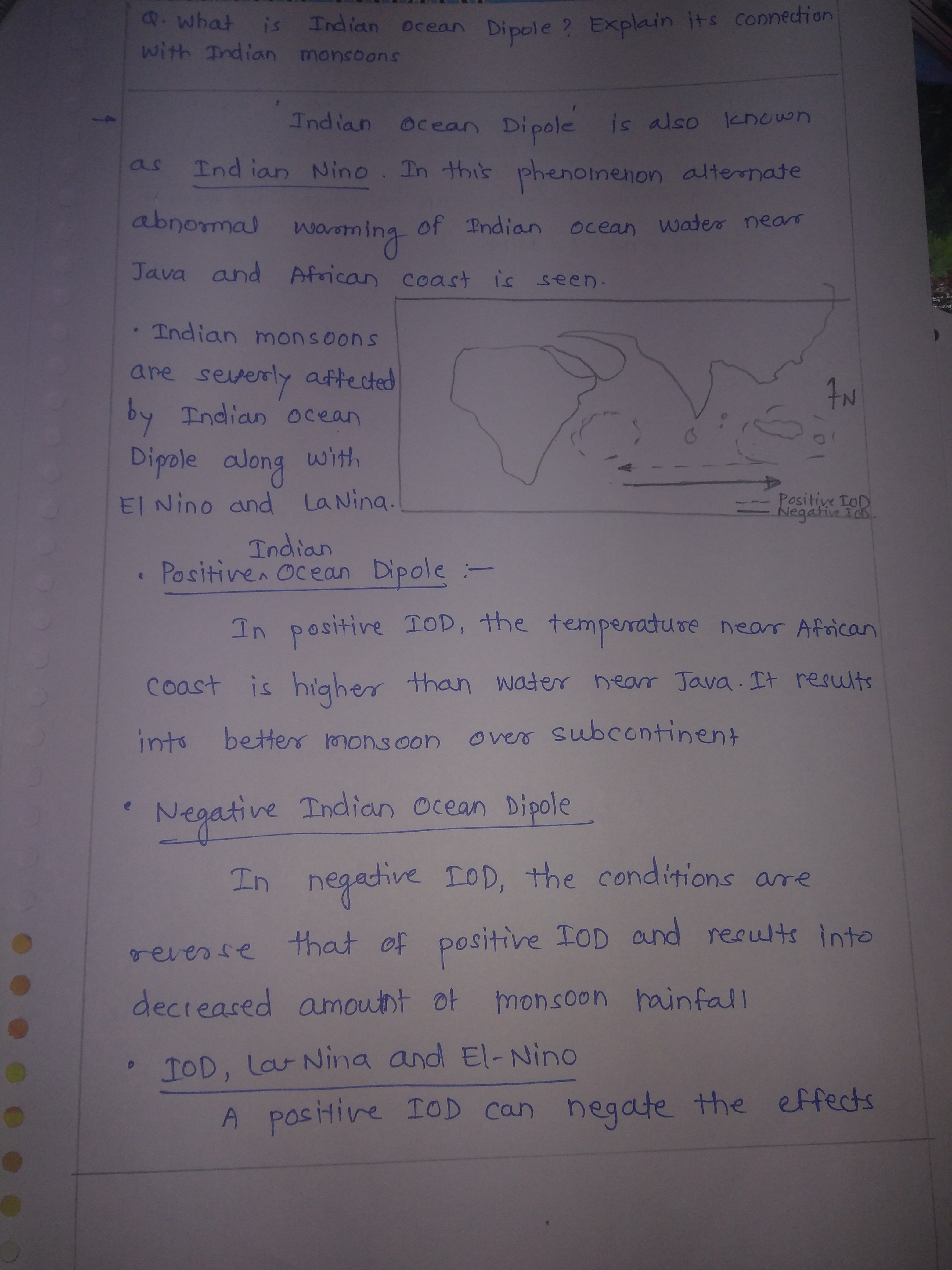 Hello…Xshay Anil
-Good introduction….with good flow of ideas…and arranged in well manner…good one…
-Very well established relationship…with clarity in words…
-However, the conclusion is absent…
-Under heading….IOD, La-Nina and El-Nino…some clarification needed…IOD is more like ENSO…Also need to mention how ENSO affects IOD and vice versa…and how Indian monsoon gets affected…
Though good attempt…keep writing…will improve for sure….
Marks awarded: 4/10 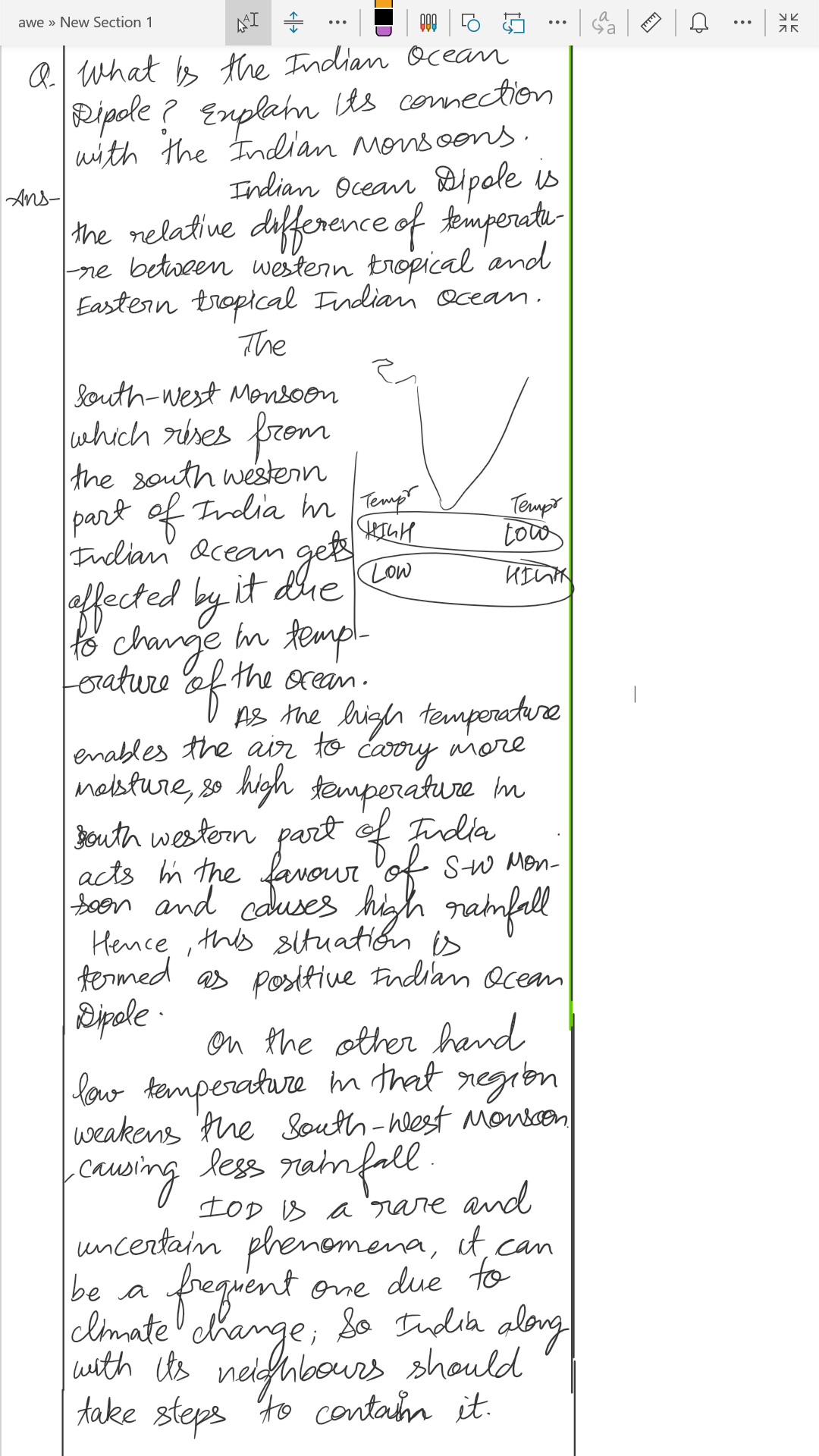 Hello Hiddenwarrior…
-Intro need more explanation…with more relevant points in it…
-You have established relationship…in general sense…though better…
-In conclusion….what sort of steps should be taken????? its more a natural phenomena….and occurs in some or other years…so human steps may be less relevant…though may prove a bit significance…but you need to be specific…by mentioning those points…

Hello Invincible…
-Intro is okay….
-However, the relationship with monsoon is not established in well manner…You have mentioned about the consequences….and not the phenomena…However, the diagram talks about the phenomena but the relationship is absent…
-Also very limited points…shows answer is incomplete…
-No conclusion….
Well attempted…keep writing… 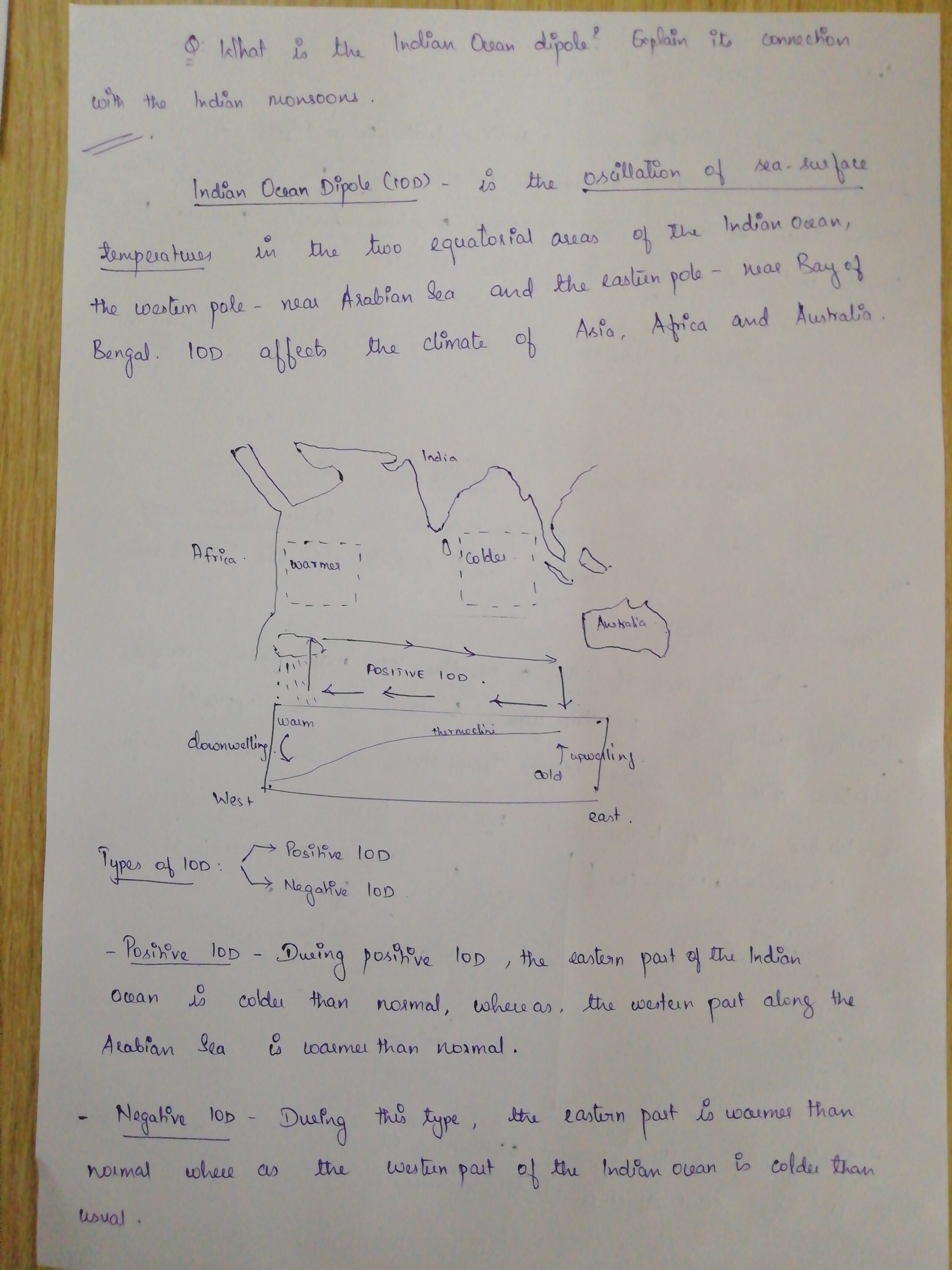 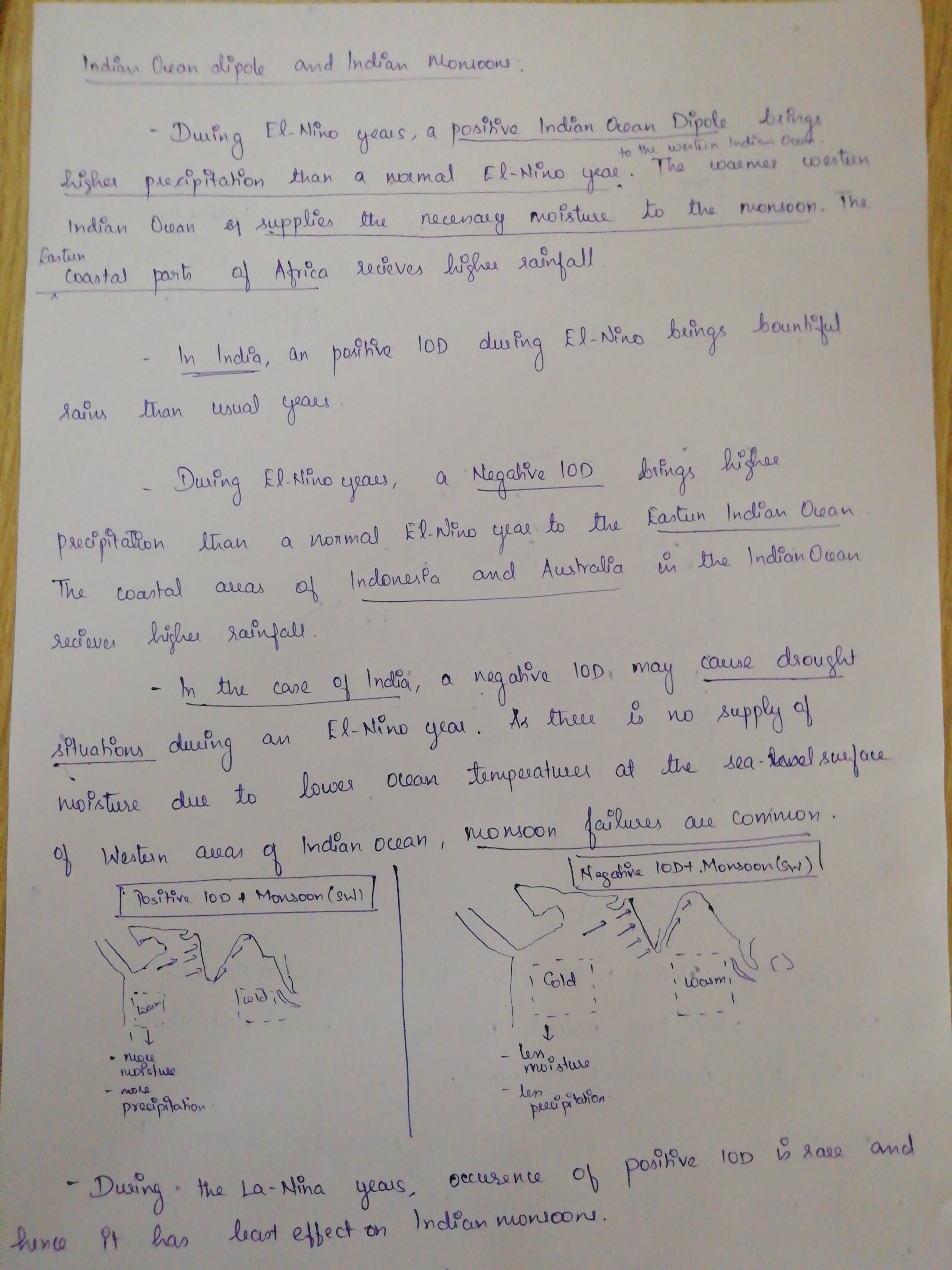