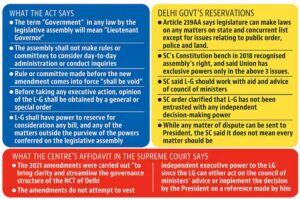 A Constitution Bench led by Justice D.Y. Chandrachud will hear the legal battle between the Centre and the Government of Delhi for control over officials in the national capital.

What is a Constitution Bench?

Constitution benches are set up when the following circumstances exist:

Issue over control of administrative services