What the Amendment seeks to achieve

The article highlights the objectives of amendments to the Government of the National Capital Territory (NCT) of Delhi Act.

Background of Article 239AA and 239AB

What the recent amendment to NCT Act seeks to achieve

Consider the question “What are the objectives of the recent amendment to the NCT Act? What will be its implications for governance in Delhi?”

Our national capital hosts the country’s legislature, the seat of the Union government, the judiciary, diplomatic missions, and other institutions of national importance. It deserves smooth functioning and cannot be subject to misadventures arising from the ambiguities in the roles and responsibilities of its stakeholders.

The article highlights the issues with the amendment bill introduced by the Centre to clarify the term ‘Government’.

Why Delhi was made Union Territory: Historical background

Issues with the Amendment Bill

Consider the question “Examine the issues with Government of National Capital Territory of Delhi (Amendment) Bill, 2021. Do you think that the Bill will avoid the conflict between the LG and the Delhi government?”

The Amendment Bill should be reconsidered given its impact on the administration of the Delhi government. 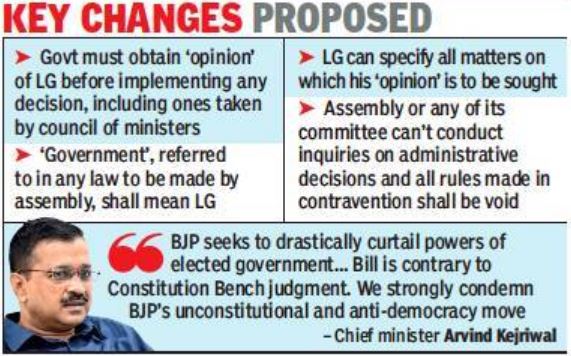 The Ministry of Home Affairs (MHA) moved the NCT of Delhi (Amendment) Bill, 2021 to the Lok Sabha where it proposed that “government” in Delhi means the Lieutenant Governor of Delhi.

What purpose does the 1991 Act serve?

What is the 2018 Supreme Court Verdict?

Consider the question “What are the parameters laid down by the Supreme Court in the Government of NCT of Delhi vs. Union of India (2018) to avoid the conflict between Lt. Governor and the Delhi Government? Also examine the scope of referring any matter to the consideration of the President by the Lt. Governor.”

What will change if the amendments are cleared by Parliament?

Does the L-G enjoy no discretionary power under the current arrangement?

What are the state government’s fears?

Mains level : Paper 2- Structural flaws in the composition of legislature of UTs

There are structural flaws in the provisions of the composition of legislature and the relationship between the council of ministers and the Administrator in the UTs.

Pattern in the resignations of MLAs

Purpose of providing legislature to UTs

Structural issues with legislature in UTs

1) Nomination of members and issues with it

Consider the question “The conflicts between the administrator, who is the nominee of the President and the elected government is inherent in the constitutional arrangement created for the UTs. Comment.”

Experience shows that the UTs having legislatures with ultimate control vested in the central administrator are not workable. So far as the conspiratorial resignation by legislators to bring down their own government is concerned, the political class will have to get the better of the predatory instincts of political parties through constitutional or other means.

The Ministry of Home Affairs (MHA) is all set to introduce legislation to amend a 1991 Act pertaining to the powers and functions of the Delhi government and the Lieutenant Governor (LG).

What is the new bill?

Why need such a law?

What made it to the news?

What are the key propositions?

The Ministry of Home Affairs (MHA) is likely to introduce legislation in the ongoing Parliament session to amend a 1991 Act pertaining to the powers and function of the Delhi government and the Lieutenant Governor.

Which of the statement(s) given above is/are correct?

Key propositions of the Bill

The article analyses the tussle between the Delhi Government and the Lt. Governor.

What the 2018 SC judgement was about

But, can Lt. Governor refer routine administrative matter to the President?

Consider the question “What are the parameters laid down by the Supreme Court in the Government of NCT of Delhi vs. Union of India (2018) to avoid the conflict between Lt. Governor and the Delhi Government? Also examine the scope of referring any matter to the consideration of the President by the Lt. Governor.”

In the Constitutional scheme adopted for the NCT of Delhi Lt. Governor should not emerge as an adversary having a hostile attitude towards the Council of Ministers of Delhi; rather, he should act as a facilitator.

Prelims level : Nothing MUch

Mains level : Puducherry Governance Crisis should be resolved as soon as possible.

Dismantling the Planning Commission and transferring its power to make state grants to the Finance Ministry; introducing terms of reference to the Finance Commission which threaten to lower the revenue share of the southern States; and the partisan use of the Governor’s office to appoint Chief Ministers in cases of hung Assemblies.

While Article 239AA lays out the scope and limits of the powers of the legislative assembly and council of ministers for Delhi, Article 239A is merely an enabling provision which allows Parliament to create a law for Puducherry.

No restrictions – Interestingly, while Article 239AA restricts Delhi from creating laws in subjects such as police, public order and land, no such restriction exists for Puducherry under Article 239A.

Broader lawmaking power than Delhi – In fact, the Government of Union Territories Act, 1963 which governs Puducherry vests the legislative assembly with the power to make laws on “any of the matters enumerated in the State List or the Concurrent List”. Hence, the legislative and executive powers of Puducherry are actually broader than that of Delhi.

After analysing the laws and rules governing Puducherry, the Madras High Court held that the LG has very limited independent powers.

Article 239B – Under Article 239B, the LG can issue an ordinance only when the Assembly is not in session and with the prior approval of the President.

Only in exceptional” situations – However, the Supreme Court in the NCT Delhi case held that “any matter” shall not mean “all matters” and it should be used only for “exceptional” situations. Hence, there is no legal basis for the LG to exercise powers independently and bypass the elected government of Puducherry.

Upholding High Court’s Order – Given this precedent and the fact that Puducherry has lesser legal restrictions on its powers, the Supreme Court should uphold the Madras High Court judgment and ensure that the LG acts only as per the aid and advice of the elected government.

Upholding Federalism –  While Puducherry may not be a “State” under the Constitution, the principle of federalism should not be restricted to States but also include the legislative Assemblies of Union Territories and, arguably, councils of local governments.

As more centralising measures such as simultaneous elections to Parliament and State Assemblies are being proposed by the Centre, it is important to reaffirm the values of federalism at every forum.

The Madras High Court verdict that the Lieutenant Governor of Puducherry should not interfere in the day-to-day administration of the Union Territory is a serious setback to the incumbent Administrator, Kiran Bedi. She has been locked in a prolonged dispute over the extent of her powers with Chief Minister V. Narayanasamy, who says she has been disregarding the elected regime and seeking to run the Union Territory on her own.

1. Decisions are Binding on officials -The court has laid down that “the decision taken by the Council of Ministers and the Chief Minister is binding on the Secretaries and other officials.”

2. Inspired by Supreme Court –  Inspired by the Supreme Court’s appeal to constitutional morality and trust among high dignitaries, the High Court has also reminded the Centre and the Administrator that they should be true to the concept of democratic principles, lest the constitutional scheme based on democracy and republicanism be defeated.

3. L-G has no independent decision-making powers –

Difference between Delhi and Puducherry

3. NCT is sui generis – The Supreme Court had described the NCT as sui generis. At the same time, the NCT Assembly is limited in the extent of its legislative powers, as it is barred from dealing with the subjects of public order, police and land.

In the event that the latest judgment is taken up on appeal, a key question may be how far the decision of the five-judge Bench on the limits of the Delhi L-G’s powers would indeed apply to Puducherry.

Mains level : LG of Puducherry vs. LG of Delhi

What did the court say?

There lies a difference: Delhi and Puducherry

LG of Puducherry Vs. LG of Delhi

The battle over the legislative and executive control of the National Capital Territory of Delhi remains unresolved.

Factors responsible for the conflict

A mature discussion between stakeholders that looks beyond short-term political gains holds the potential to resolve the embedded contradiction. Should Delhi be given statehood?

Recently Supreme Court has sought more clarity on the scope and boundaries of the relationship between the Delhi government and the Centre as at times, both the Centre and Delhi government contest each other’s right to administer and govern the National Capital and demands have been raised to give statehood to Delhi.

The elected governments have time and again felt crippled in decision-making as the assembly does not have powers like other state assemblies. All political parties that have been in power in Delhi have lamented this and raised the demand for full statehood for the national capital.

What is the present status of Delhi?

In the current system, power is divided between the chief minister and the Central government through the LG. This dual control creates an inherent tension between the two power centres.

Though Delhi Assembly is given the powers to govern and make laws on all but three subjects – public order, police and land but the Union government has been violating this constitutional provision and has been exercising authority on several subjects.

Delhi Police reports to the Union Home ministry and this ties their hands in ensuring maintenance of law and order in the capital. To avoid the tussle, the Centre can create and deploy a central police force for guarding its buildings and for diplomatic duties. For law and order duties, Delhi’s elected government must be in full command.

The Delhi government cannot decide on its own the use that the city’s land should be put to. This leads to conflict at times.

Each state of India has its own Public Service Commission that recruits bureaucrats to run the state government’s administrative machinery. Delhi, being a Union territory, does not have a cadre of officers of its own and is part of a common cadre shared with other UTs.

Why not to give the statehood?

What’s the way ahead