According to the Association for Democratic Reforms (ADR), 233 MPs in the current Lok Sabha are facing criminal charges, up from 187 in 2014, 162 in 2009, and 128 in 2004. Recently, the Supreme Court has imposed fines on political parties for failing to comply with its orders regarding complete disclosure of their candidates’ criminal history. 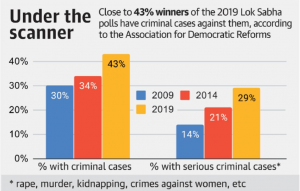 Why legislature and political parties are reluctant?

The legislature and the judiciary need to do more to curb the menace of criminalisation of politics.

Feeling anxious about your UPSC preparation? Don’t worry, speak with our mentors and get your problems resolved, personally! (Click here)