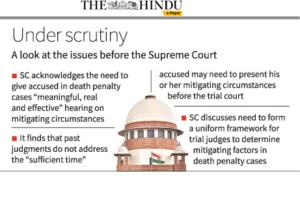 The Supreme Court has referred to a Constitution Bench the question of how to provide accused in death penalty cases a “meaningful, real and effective” hearing of their mitigating circumstances before a trial judge.

When is it awarded?

Special factors on the death penalty jurisprudence in India

(a) Increase in Sexual Offences

(b) Sedition and waging War against India

The Supreme Court has always said that the death sentence should be given rarely.

Avenues available to a Death-Row Convict

Other issues with such executions

The Law Commission of India in its 262nd Report (August 2015) recommended that:

Further, the Commission sincerely hopes that the movement towards absolute abolition will be swift and irreversible