Prelims level : Power of the President to pardon under Article 72

Mains level : Paper 2- Delay in carrying out death penalty and issues associated with it

The article highlights the issue of delay in carrying out the dealth penalty and issues associated with it.

Issue of delay in carrying out the punishment

Consider the question “Against the backdrop of delay in carrying out the dealth penalty in India, take the review of India’s position on the abolition of death penalty.” 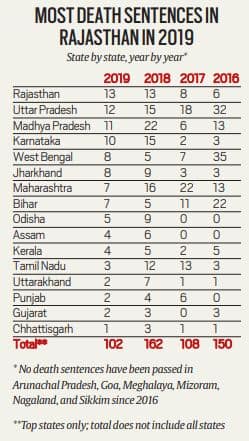 After the Supreme Court’s dismissal of review petitions by all four convicts in the Nirbhaya rape and murder case, the four have moved one step closer to the gallows.

‘Reform and rehabilitation of the criminal’

Mains level: The newscard talks against the death penalty. It supports the argument that there is no point of allowing death penalty.

Six members of a nomadic tribe spent 16 years in prison in Maharashtra;three of them were on death row for 13 of these years.A three-judge Bench has now found that unreliable testimony had been used to convict the six men.

Voting for Sovereignty over Legal System Mains Level:  Issues related to the discretionary powers and appointments of Governor are well debated this year.

Discuss: Is capital punishment justified, even if the convict is sentenced for a gruesome crime belonging to rarest of rare cases? Also examine the opinion of the Supreme Court of India regarding death sentences

Until death penalty is abolished, courts need to humanise the law and procedure relating to death and mercy.

Germany has expressed its inability to sign the Mutual Legal Assistance Treaty (MLAT) with India, citing its provision for death penalty for heinous crimes and terror activities.

What Judicial Responsibility Must Mean in the Age of the Death Penalty?

Here’s is a pertinent case which we have picked up from the article. It’s written by a High Court Judge:

In 2000, the Madras High Court (Justice Sirpurkar and I) heard an appeal against the death penalty. A school-girl was raped and murdered by three persons. It was a sensational case. The trial court found it to be a case of the ‘rarest of rare’ and sentenced them to death. We commuted the sentence to life. I received several letters asking me if I was a woman, since the deceased was a victim of sexual violence.

There was no platform from where I could say that we had not acquitted the accused, but we had commuted the sentence, for valid reasons regarding the circumstances of the accused. Sometime in 2014, I read a news item about a project in Tamil Nadu conducting courses for prisoners to rehabilitate and equip them with life skills. Among the life-term prisoners who had secured gold medals and state ranks was the first accused in the above case.

This is not submitted as an argument against the death penalty, but as an argument for upholding the right to life. The state punishes not only as a deterrent, but to reform too.

The death penalty has no demonstrated utility in deterring crime or incapacitating offenders, any more than its alternative — imprisonment for life. The quest for retribution as a penal justification cannot descend into cries for vengeance.

What do you think of this case?

What was the Bachan Singh versus State of Punjab & the “rarest of the rare” doctrine?

Here’s what different parties had to say:

“O my lord, forgive this man. He knows not what he does!” Yakub Memon had screamed like a caged animal, his angry eyes fixed on the judge when the Tada Court sentenced him to death in July 2007.

The outburst stunned the courtroom into silence, but Judge P.D. Kode remained unperturbed by the drama, and went on with his business with the usual calmness associated with him.

Yakub Memon’s review petition seeking the recall of the March 21 2013 apex court order upholding his death sentence is presently before the Supreme Court which has stayed his execution.