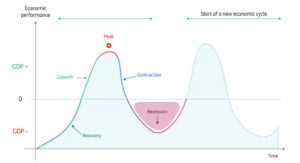 The Eurozone is almost certainly entering a recession, with surveys showing a deepening cost-of-living crisis and a gloomy outlook that is keeping consumers wary of spending.

These phenomena are some of the main drivers of a recession:

What’s the difference between Recession and Depression?

How long do recessions last?

Can we predict a recession?

Given that economic forecasting is uncertain, predicting future recessions is far from easy. However, the following warning signs can give you more time to figure out how to prepare for a recession before it happens:

How does a recession affect individuals?