Prelims level : Terms of References for the office of CCPA 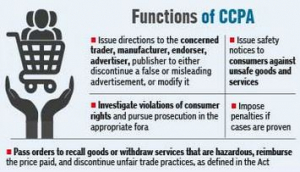 Recently the Union Ministry of Consumer Affairs has announced that a Central Consumer Protection Authority (CCPA) will be established by the first week of April.

What is the Central Consumer Protection Authority?

What can the possible structure of CCPA be?

What kind of goods and food items in particular, can be classified as “dangerous, hazardous or unsafe”?

What will the CCPA do if any goods or services are found not meeting these standards?

Under Section 20 of The Consumer Protection Act, the proposed authority will have powers to:

For manufacture, selling, storage, distribution, or import of adulterated products, the penalties are:

How will it deal with false or misleading advertisements?

What other powers will the CCPA have?

Five new rights you get as a consumer