Mains level : Extreme weather events in India and their mitigation

Nineteen extreme weather events in 2019 claimed 1,357 lives, with heavy rain and flood accounting for 63 per cent of these deaths, revealed Down To Earth’s State of India’s Environment 2020 report.

Q. Extreme weather events have been the biggest catastrophe in India this year. Discuss.

Data from this newscard can be used to substantiate your mains answer with relevant data. 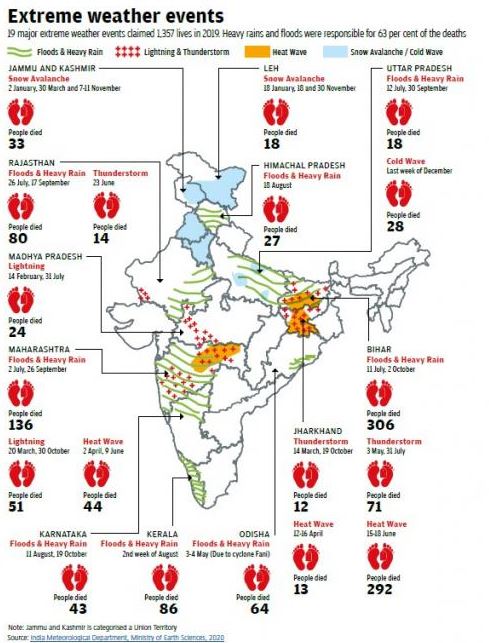 Systems in place to tackle extreme weather events are as follows:

4.NDMA has issued an action plan for Prevention and Management of Heat Waves.

Problems with accurate meteorological predictions are as follows:

1.Meteorological predictions are considered for broad geographical areas and timeframes. It is not yet possible to predict a thunderstorm or lightning at a village or a part of a city.

2.The exact times these events will hit, too, cannot be predicted.

3.Alerts and warnings are in the nature of a general advisory, telling the people to expect these events, and to take precautions

Steps taken by the State government are as follows: