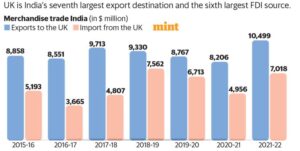 India and the UK recently revived talks for a Free Trade Agreement (FTA) to encourage trade and investment. The FTA between India and UK is expected to be signed by October.

What is a Free Trade Agreement (FTA)?

What is the status of the India-UK FTA?

Which are the countries with which India has FTAs?

What is the level of India-UK trade?

How will an FTA with UK benefit India?