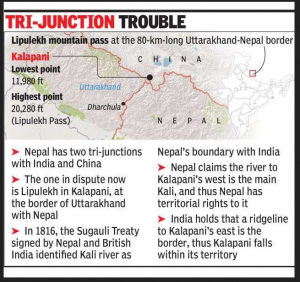 Nepal has protested against India’s inauguration of a Himalayan link road built in a disputed territory which falls at a strategic three-way junction with Tibet and China. Kathmandu claims the highly strategic areas of Limpiyadhura and Kalapani, although Indian troops have been deployed there since the 1962 war.

Q. The India-Nepal bilateral relations these days are increasingly seen through the lens of China factor. Examine.

Since, the Gandak change of course has been gradual, India claimed Susta as part of their territory as per international laws.