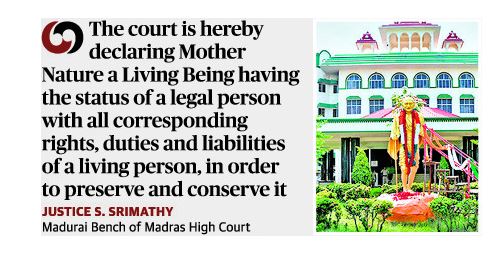 Holding that it is the right time to confer juristic status to ‘Mother Nature’, Justice S. Srimathy of the Madurai Bench of Madras High Court invoked the ‘parens patriae jurisdiction’, and declared ‘Mother Nature’ as a ‘living being’ having the status of a legal entity.

Legal rights for nature: A backgrounder

What is the case for Madras HC’s personification of nature?

Significance of such status