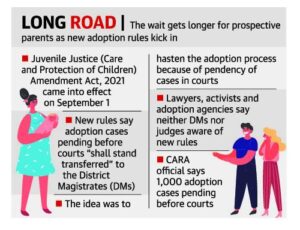 There is confusion over the implementation of new adoption rules that require the transfer of adoption petitions from courts to District Magistrates (DMs).

Adoption in India: A backgrounder

Why is there concern over the revised rules?

Is it such a big issue?

What is the adoption procedure in India?

Issues with child adoption in India