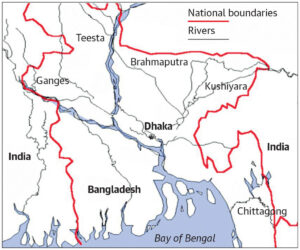 For the first time in 26 years, India and Bangladesh agreed to share the waters of a significant transboundary river, the Kushiyara, while negotiations over a long-delayed agreement to share the Teesta River’s waters, which are politically sensitive are still ongoing.

What is the Kushiyara River Treaty?

How will Bangladesh use the water?

Why is the water from the Kushiyara so important for Rahimpur Canal?

What was India’s objection to the Rahimpur Canal?

What are the hurdles to the Teesta agreement?