What are 5 resolves given by PM? 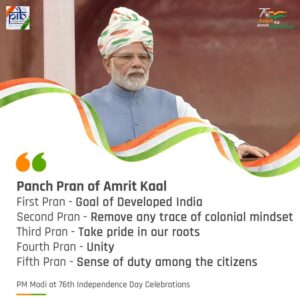 (1)First pran: The first pran is about inculcating a culture of thinking big and at scale.

(2)Second pran: The second Pran is that in no part of our existence, not even in the deepest corners of our mind or habits should there be any ounce of slavery. It should be nipped there itself.

(3)Third pran: The third Pran is that we should feel proud of our heritage and legacy.

(4)Fourth pran: Fourth pran which is equally important is unity and solidarity.

(5)Fifth pran: Fifth Pran is the duty of the citizens, in which even the Prime Minister, Chief Minister cannot be an exclusion.

Challenges before India in next 25 years

Q. What are the challenges India will face in next 25 years? Discuss the panch pran resolves of PM showing how they will address these challenges.