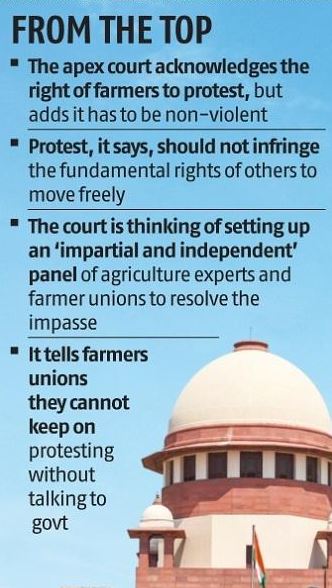 The Supreme Court has intended to stay the implementation of the controversial agricultural laws while proposing to form an independent committee chaired by a former CJI to resolve the stand-off between the protesting farmers and the Union government.

Q.The judicial systems in India and the UK seem to be converging as well as diverging in recent times. Highlight the key points of convergence and divergence between the two nations in terms of their judicial practices. (150W, CS Mains 2020)

The implementation of a law can be halted on two narrow grounds:

What are the issues with the suspension?

The Supreme Court order has given the government a setback while not addressing the concerns of the protesting farmers. The court needs to consider these facts and mend its implications.