Mains level : Persistence of marital rape and need for its criminalization

The Supreme Court has sought a response from the government on appeals to criminalize marital rape. 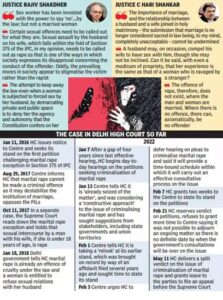 Reasons for disapproval of this concept

However, marital rape is still not a criminal offence in this case and is only a misdemeanor.