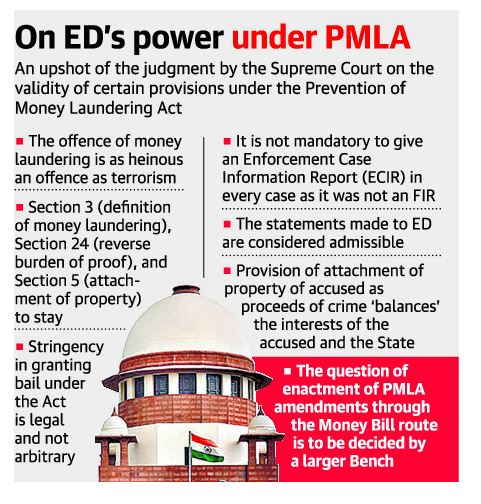 The Supreme Court upheld the core amendments made to the Prevention of Money Laundering Act (PMLA), which gives the government and the Enforcement Directorate (ED) virtually unbridled powers of summons, arrest, and raids, and makes bail nearly impossible while shifting the burden of proof of innocence on to the accused rather than the prosecution.

Did the judgement say?

What were the petitions?

From where does the ED get its powers?

At what stage does the ED step in when a crime is committed?

What differentiates the probe between the local police and officers of the ED?

What are the other roles and functions of the ED?

Can the ED investigate cases of money laundering retrospectively?

Under Section 3 of PMLA, a person shall be guilty of money-laundering, if such person is found to have directly or indirectly attempted to indulge or knowingly assist a party involved in one or more of the following activities: