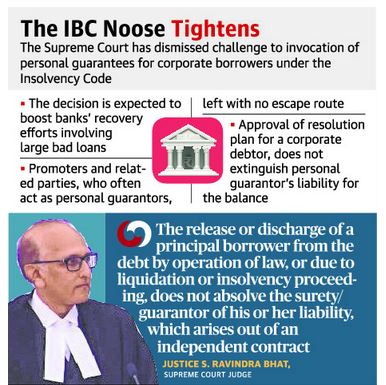 The Supreme Court has upheld a government moves to allow lenders to initiate insolvency proceedings against personal guarantors, who are usually promoters of big business houses, along with the stressed corporate entities for whom they gave a guarantee.

What is the Judgement?

What is a personal guarantee? How do promoters use this route to get funds?

Impact of the move

About the Insolvency and Bankruptcy Code, 2016

Key features of the code

The Code proposes two separate tribunals to oversee the process of insolvency resolution, for individuals and companies: