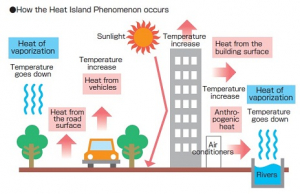 A recent study from IIT Kharagpur called “Anthropogenic forcing exacerbating the urban heat islands in India” noted that the relatively warmer temperature in urban areas, compared to suburbs, may contain potential health hazards due to heat waves apart from pollution.

What is an Urban Heat Island?

Control of UHIs and mitigation

Relevant to the present context are: