In a recent report, the State Bank of India, which is the largest public sector bank in the country, has stated that the stage is set for a reverse repo normalization.

The RBI keeps tweaking the total amount of money in the economy to ensure smooth functioning by two types of policies:

When the RBI wants to boost economic activity it adopts a so-called “loose monetary policy”.

What is Reverse Repo? 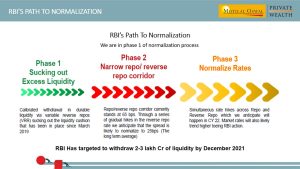 What does reverse repo normalization mean?

Q.If the RBI decides to adopt an expansionist monetary policy, which of the following it would NOT do?

Post your answers here:
4
Please leave a feedback on thisx