The release of the NFHS data (and the Niti Aayog’s study on developing a multi-dimensional index of poverty — MPI) has led to a considerable amount of discussion, and justifiably so.

Understanding the progress and development: MPI

Evolution of poverty over time 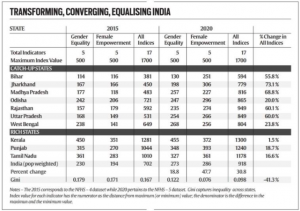 Major findings from the NHFS data

Consider the question “What does NHFS-5 data reveal about the inequality in India?”

India has been, and was, not one but several Indias. What is remarkable about its recent history is the rapid process of uneven change — where progress is considerably higher for the poorer states — the convergent, and inclusive pattern of development. That is the real story behind the NFHS-4 and NFHS-5 numbers.