A fire broke out near the Zaporizhzhia nuclear plant in Ukraine (Europe’s largest) during the course of a military battle. Had the fire affected the cooling system, the plant’s power supply, or its spent fuel pool, a major disaster could have occurred.

Consider the question “What are the concerns with the nuclear energy expansion plans of India? Suggest the way forward.”

Given the inherent vulnerabilities of nuclear reactors and their high costs, it would be best for the Government to unambiguously cancel its plans for a nuclear expansion.

Back2Basics: What is EPR (nuclear reactor) 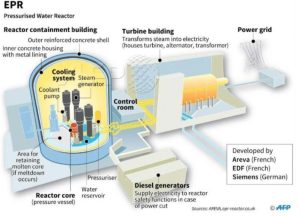