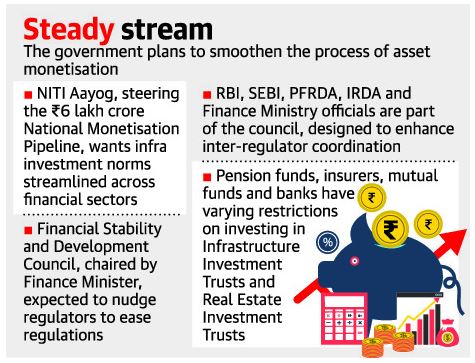 Finance Minister has recently announced the framework for the National Monetization Pipeline (NMP) and its process is under discussion.

What is Asset Monetization?

What is the National Monetization Pipeline?

Will NMP help the economy?

What are the risks?

The Central government has unveiled a four-year National (Asset) Monetisation Pipeline (NMP) aiming to garner Rs 6 lakh crore. The NMP is aimed at handing over huge functional infrastructural assets of the country to private corporate companies and big business houses, including foreign MNCs. The corporate cronies of the government will be allowed to mint huge money utilising the assets built with people’s money and labour. In the same line many NDA led state governments have also started the exercise of gifting the state owned assets and land to private corporate.

Privatisation at any cost and by any means has become the hallmark of this government. It is now seeking to hand over the huge state-owned infrastructural assets for upfront payment for future expected income. That is the sinister design of this so called NMP, which is going to handover the right of operating these huge infrastructural assets for a period of 30-35 years to the monopolies. This would adversely impact the entire economy availing these infrastructural services. It will result in further worsening of the already alarming situation of job losses and unemployment.

Also 28,608 circuit kilometres electricity grid under Power Grid Corporation of India and around 30,000 kilometres of highways are also being handed over to private corporate for long-term with monopoly operational rights. Along with the NMP, government has now come out with a land monetisation programme and a public sector company titled ‘National Land Monetisation Corporation’ has been set up to facilitate selling away huge land assets of PSUs, railways, defence sector, BSNL, etc., for a pittance. And this is not all – the NMP project envisages further flow of more infrastructural assets through that pipeline to private corporates giving them long-term monopoly rights.

The present regime with its historical opposition to the public sector and to self-reliant development of the national economy based upon it, is resorting to privatisation of the entire public sector covering infrastructure, industries and public utility services, by any means and at very low prices. It is completely unconcerned about the destructive impact of these measures on the national economy and our people. In the thirty-odd years of neoliberal policy regimes, the present regime account for the overwhelming share of disinvestment of public sector enterprises.

Decisive and determined struggles against the loot and handing over of people’s assets to big business, domestic and foreign, in the name of “monetisation” of assets should be developed.

The Union government claims that the NMP involves only a lease of assets, not their sale. This is a patently misleading claim. The big business entities that make use of the assets leased to them will, through fleecing their customers and other means, make huge gains worth several times the paltry lease amounts they pay to the government.

There is no guarantee that the assets will be returned to/taken back by the government at the end of the lease period in the same conditions as at the time of lease. The entire exercise begs the simple question of why the assets cannot be operated by the government to benefit the people.

Let’s oppose the Union government’s anti-national and anti-people project of “National Asset Monetisation Pipeline”. This anti-national design of loot on national assets shall not pass.