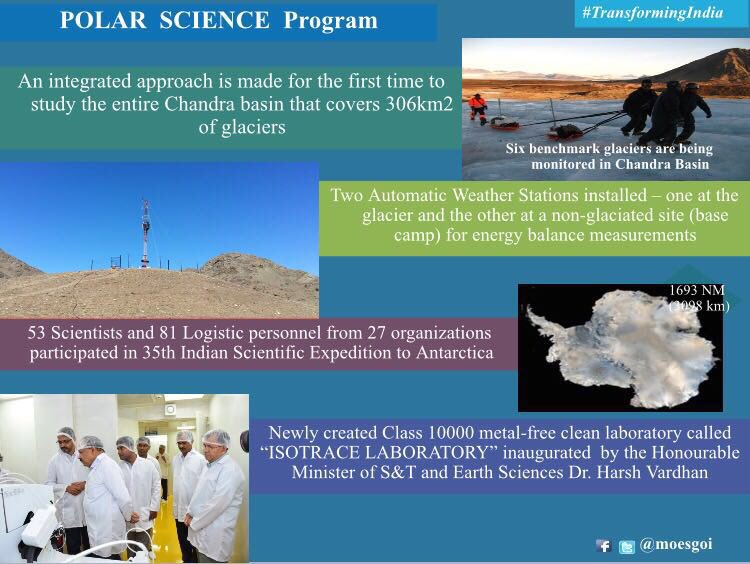 India initiated its Arctic Research Program in 2007 with thrust on climate change in the circumpolar north. The major objectives of the Indian Research in Arctic Region are as follows:

To study the hypothesized tele-connections between the Arctic climate and the Indian monsoon by analyzing the sediment and ice core records from the Arctic glaciers and the Arctic Ocean.
To characterize sea ice in Arctic using satellite data to estimate the effect of global warming in the northern polar region.
To conduct research on the dynamics and mass budget of Arctic glaciers focusing on the effect of glaciers on sea-level change.
To carry out a comprehensive assessment of the flora and fauna of the Artic vis-àvis their response to anthropogenic activities. In addition, it is proposed to undertake a comparative study of the life forms from both the Polar Regions.

Research Stations in the Arctic

Himadri – India launched its first scientific expedition to the Arctic Ocean in 2007 and opened a research base named “Himadri” at the International Arctic Research Base at Ny-Alesund, Svalbard, Norway in July 2008 for carrying out studies in disciplines like Glaciology, Atmospheric Sciences & Biological Sciences.

Many countries have set up research stations in Antarctica to study the climate, weather, geology, and wildlife of this unique region.

The Indian Antarctic Program is a multi-institutional program under the control of the National Centre for Antarctic and Ocean Research, Ministry of Earth Sciences, Government of India. It was initiated in 1981 with the first Indian expedition to Antarctica. Under the program, atmospheric, biological, earth, chemical, and medical sciences are studied.

A centre has been established as a part of Indian government’s initiative to study and quantify the Himalayan glacier responses towards climate change.

• Help researchers to quantify the glacier melting and its relation to changing climate.

• Some of the glacier that are already being studied under this project include Bada Shigri, Samudra Tapu,
Sutri Dhaka, Batal, Gepang Gath and Kunzam.