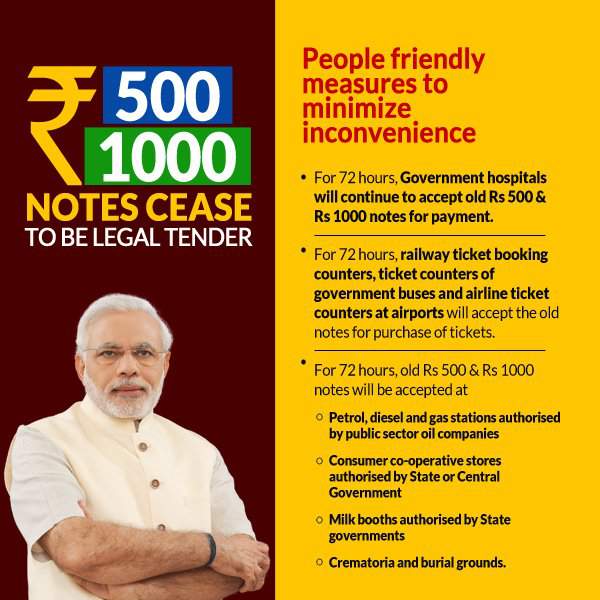 What is legal tender?

The coins issued under the authority of Section 6 of The Coinage Act, 2011, shall be legal tender in payment or on account i.e. provided that a coin has not been defaced and has not lost weight so as to be less than such weight as may be prescribed in its case: –

(a) coin of any denomination not lower than one rupee shall be legal tender for any sum,

(b) half rupee coin shall be legal tender for any sum not exceeding ten rupees,

What India witnessed on 8th november 2016 was the not the first time we plugged and play the demonetization game.

1977: The Wanchoo committee (set up in 1970s), a direct tax inquiry committee, suggested demonetization as a measure to unearth and counter the spread of black money. However, the public nature of the recommendation sparked black money hoarders to act fast and rid themselves of high denominations before the government was able to clamp down on them!

The High Denomination Bank Notes (Demonetisation) Act deemed the Rs 1,000, Rs 5,000 and Rs 10,000 notes illegal for the second time. At the time, then-RBI governor I.G. Patel disagreed with the measure.

2016: Recommendations of SIT on Black Money as Contained in the Fifth SIT Report

Cash holding : The SIT has further felt that, given the fact of unaccounted wealth being held in cash which are further confirmed by huge cash recoveries in numerous enforcement actions by law enforcement agencies from time to time, the above limit of cash transaction can only succeed if there is a limitation on cash holding, as suggested in its previous reports. SIT has suggested an upper limit of Rs. 15 lakhs on cash holding. Further, stating that in case any person or industry requires holding more cash, it may obtain necessary permission from the Commissioner of Income tax of the area.

How big is the impact of this announcement?

A better sense of this can be gauged from this graph below. As you can see, the monetary value of Rs500 and Rs1,000 notes in circulation far outstrips any other denomination.

Putting it simply, at the stroke of midnight, a little over 80% of the cash in India (by value) will be worthless pieces of paper.

With these notes now going out of circulation overnight, the government has created a solid opportunity to clean up the system. Currently India’s black money economy is about 20% of its GDP, according to estimates from Ambit Research. Apart from cash, Indians also hoard wealth worth over billions of dollars in the form of gold. To understand the issue of Black money in depth, read this blog
What was the need for such a move?
– The incidence of fake Indian currency notes in higher denomination has increased
– Unaccounted money, often used in any form of corruption or illicit deals, usually takes the form of high-value notes, which in this case are the Rs 500 and Rs 1,000 bills
– The Financial Action Task Force, a global body that looks at the criminal use of the international financial system, notes that high-value bills are used in money laundering schemes, racketeering, and drug and people trafficking
Comparison of high value bills across the world
– In the United States, the highest denomination bank note is $100. When it comes to the United Kingdom, the highest denomination bank note issued by the Bank of England is £50
– As you can see, the highest denomination note is essentially 50-100 times the smallest denomination note of one dollar or one pound
– In India, up until now the highest denomination note was Rs 1,000 and this was 1,000 times the smallest denomination note of Re 1 (Note: Re 1 notes are issued by the ministry of finance)

When a currency has notes of higher denomination, it is easier to launder money i.e. store black money, as it takes less space and weighs less as well.

The positives that come out of this announcement
– Remember your economics basics? What happens when people go back and deposit their money. Deposits increase for the banks and that means eventually interest rates might come down
– Curb on black money – corruption, terrorism etc. (as discussed above) [Backgrounder on Black money]
– Boost to cashless economy with people adopting habits of wallets etc. [Read about Payment Banks here]
– Boost to Jan Dhan Account’s relevance for poor people – Would be interesting to factor the surge in new account creation and activity in dormant accounts [Read more on JAM Trinity]
– Politics and various elections are known to run on cash. Same is the case with sectors such as real estate. Expect a gradual reform in this area
The potential negatives out of this announcement
– Everything else being equal, withdrawal of currency in circulation, in the (very) short-run, might actually drive up interest rates
– (Very) Short-term liquidity squeeze could be severe and hence economic activity could suffer
– Sovereign credit rating – possibly no impact. But if there are short-term impact on economic activity which dampens government revenues and widens deficit, you can expect a short term decline in ratings
– Cost of printing the new currency (if high) would create another political furore
– Immediate chaos and public mayhem (which will bring out potential issues of execution)

3 Important Steps taken before this announcement was made

1. Jan Dhan scheme, under which 22-crore new bank accounts were opened in one-and-a-half years (May 2016), was the first truly game-changing move. Most of these accounts brought those people into the network who were outside the ambit.

According to the Economic Survey for 2015-16 released in February this year, leakages in LPG subsidy transfers fell 24 percent and the exclusion of beneficiaries had been greatly reduced, thanks to the infrastructure created by Jan Dhan accounts, Aadhaar and mobile networks, or the JAM trinity.

2. The next step was to bring back black money stashed away in tax havens or foreign banks abroad and here.

3. Then came the Income Declaration Scheme. By 30 September, all illegal asset holders had the chance to declare their holdings and pay 45 % tax and a penalty in exchange for anonymity and immunity from criminal proceedings.

The tax department has reported Rs 65,250 crore worth of black money from 64,275 declarations. This means about Rs 30,000 crore will flow into the government’s tax kitty.

#1. The government should come up with additional economic stimulus to offset the dampening effect:
(a) Accelerated reduction in corporate income tax along with withdrawal of exemptions;
(b) Ending uncertainty on GAAR and retrospective taxation or any other blockbuster measure that they might be working on, that would offset the initial adverse economic impact.
#2. Assess Black Money better: There’s no good estimate for how much of India’s black money is in forms other than currency/physical notes such as gold, jewellery, land or any other form of wealth. Therefore, while banning Rs 500 and Rs 1,000 notes will tackle the black money that is in the form of hard cold cash, it won’t affect other forms of black money.

#3. Prepare for the challenges of cashless economy: The UPI (unified payment interface) system is likely to be fully operationalised only by January 2017.  India was recently hit by one of its biggest financial security breaches compromising hundreds of thousands of debit cards. Read more about Cyber Security challenges from here