India is facing a lot of inter-state water disputes. Most of the tribunals that have been set up have failed to arrive at a solution. Will this new mechanism solve the problem? This is important from context of GS-2.

In view of the ongoing water disputes in the country, Union Cabinet has proposed to have a permanent tribunal that will subsume existing tribunals and is expected to provide for speedier adjudication.

What are the problems in present set-up? 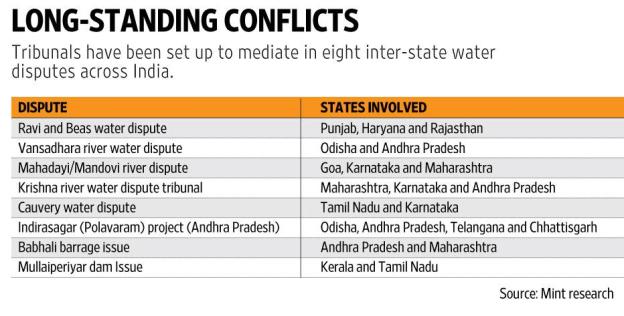 Analysis of the new setup

Q.1) The Centre’s proposal to set up a single, permanent tribunal to solve inter-state river water disputes could be a major step towards streamlining the dispute redressal mechanism. Examine.

Q.2) What are the existing constitutional and legal provisions regarding water? Discuss the pros and cons of setting up a common tribunal to solve inter-state water disputes?

Q.3) Discuss the pros and cons of having permanent river water tribunal in India where there is significant number of such disputes.