As the focus of the Government is on black money, looking at agriculture for enhanced tax collection appears a logical corollary. This issue is definitely politically sensitive with several vested interests involved. The Government has been bold enough to operate the National Agricultural Market which breaks the traditional stronghold. The next step would be to start reforms in the direction of taxes so as to bring about greater accountability in the system while plugging the lacuna. 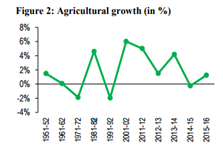 It should be taxed

Taxing agricultural income has not found favour mainly because of two factors.