UDAN (‘Ude Desh ka Aam Naagrik’) is a first-of-its-kind scheme globally to stimulate regional connectivity through a market-based mechanism. It is also linked to UPSC mains Syllabus (Infrastructure). Every year UPSC is asking 1-2 questions on infrastructure related issues. Therefore, this scheme is important for the exam.

Key features of the UDAN scheme 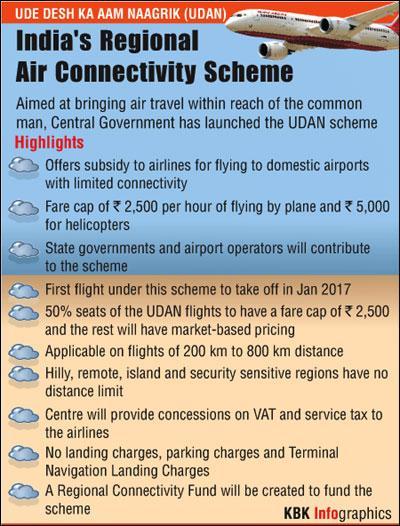 Pros of the scheme

Challenges/issues in implementing this scheme

Analysts say even as the intent of the policy is good and the efforts laudable, its success will depend on proper implementation and traffic demand/load factors. It’ll be a while before the results are visible, and its success can be measured. Needless to say, if the scheme is successful, it will have a positive impact on travel- and hospitality-related sectors. Domestic air-travel demand could get a fillip, which will be positive for the aviation sector from a long-term perspective. Developing regional routes is expected to eventually feed into major routes, and that augurs well for the sector.

Q.) Discuss the main features and significance of the Udan scheme.

Q.) It is commented that success of UDAN scheme will depend on proper implementation and traffic demand/load factors.