Unlike the previous period, this period saw was marked by political stability that ensured and encouraged cultural florescence. The Guptas and Vakatakas were the major powers in the north and central india respectively.

South however witnessed a transitionary period called the Kalabhra Interregnum.

This transitionary period was known as the ‘Dark Ages’ and lasted for 300 years. Not much is known about this time.

More can be read here – http://www.gloriousindia.com/history/kalabhra_interregnum.html

Gupta Empire extended for close to 300 years – almost twice the duration of Mauryan Empire and 1.5 times the British Empire.

The maps above illustrate how they unified the whole of Northern India by around 480 AD. The Gupta Empire saw many great rulers who patronized art, architecture and science. No wonder it has been referred to as the Golden Age. (this however remains contested as the society in the times of Gupta period showed signs of degeneration).

Finally the Guptas lost out to the Hunas.

Sanskrit was the court language of the Guptas. Needless to say, Classic Sanskrit literature saw tremendous development under their patronage.

Two great epics(Mahakayva), the Ramayana and the Mahabharata were compiled around 4AD. Their importance is as follows

Puranas follow on the lines of epics. Some of the earlier Puranas were compiled in this era. There are 18 Mahapuranas and 19 Upa-puranas.

The Puranas were associated with revivalism of Hinduism. They were in the form of stories which made them more palatable to masses than the earlier bramanical text – the Vedas.

Besides the epics, this period also saw the development of kavya (poetry), nataka (drama) and other literature.

Two things can be noted about plays

The table below summarizes the important works of this time.

Note4Students – This information is high priority for prelims. Try to get the correct pronunciation of the texts. Follow the theme to remember their names.

The brahmanical tradition witnessed a decisive change from what was traditionally practised as “Vedic tradition”. Vedic Brahmanism gave way to Pauranic Hinduism. Sacrifices/ Rituals were not entitrely abandoned but they lost their steam.

Where Vedic Brahmanism was intimately linked with lavish sacrifices and upper varna-jatis, the Pauranic Hinduism became widely popular as it was open to all varna-jatis including Shudras, women etc and encouraged the worship of a personal deity.

Its accesibility lay in performing acts that required little investments – the giving of gifts, keeping of fasts and vows, travelling collectively to places of pilgrimages and subscribing to local mythologies.

Buddhism no longer received royal patronage unlike the earlier times. Samudragupta’s permission to the King of Ceylon to erect a magnificent monastery in Bodh-Gaya indicates that Buddhism was given a good patronage.

Nalanda prospered under their patronage.

1. Homogenization with Hinduism: Hindus practiced devotion to Buddha as a reincarnation of Lord Vishnu. In a way, Hinduism went on to assimilate Buddhism as a part/ branch of its own.

2. Humble beginnings of what later comes to be known as tantric Buddhism. The new form of text associated with this tradition, the tantras, appeared during the Gupta period, and there are indications that distinctively Tantric rituals began to be employed at this time as well. Tara is a female Bodhisattva in Mahayana Buddhism who appears as a female Buddha in Vajrayana Buddhism. She is known as the “mother of liberation”, and represents the virtues of success in work and achievements.

This will later develop into full fledged Vajrayana cult and reach its peak during the Pala Empire.

Jainism spread into Gujarat. At Valabhi, took place the compilation of two Jain canonical texts in two councils in 4th and 5th century.

Shaktism and Tantrism are closely associated cults. They started as different streams. Shaktism revolves around placing the women at the center. Later this cult starts to be associated with Shaivism, where Shakti is seen as Shivas consort.

The name Tantrism is derived from sacred texts called tantras. The earliest works were written in the Gupta period. In course of time, tantrism manages to penetrate all religion.

This is the only known example of stupa developed during Gupta era. Originally built in 249 BCE during the reign of king Ashoka of the Maurya Dynasty, this massive and prominent structure has over time gone through several expansions and additions. This solid cylindrical shaped Stupa made of red bricks and stone. 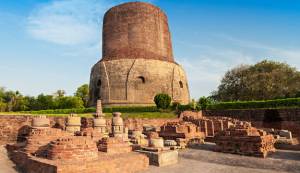 The earliest examples of religious architecture were cave-temples which typically had exteriors decorated with relief sculpture and a single carved doorway.

Inside the shrine, ritual sculptures were placed such as a Shiva linga and the walls were richly decorated with more carvings showing scenes from mythology.

Note4Students – There are a number of places in India with the same name, the most notable being the mountain called Udayagiri at Rajgir in Bihar and the Udayagiri and Khandagiri caves in Orissa. The caves in Orissa correspond to the Jainism.

The Udayagiri caves belonging to the Gupta period are located in Vidisha, Madhya Pradesh.

There are about 14 caves but you need to focus on only 1 of them: Cave #5 – Dedicated to the Varaha avatar of Vishnu.

This shrine is one of the finest examples of Gupta art, the celebrated relief showing Vishnu in his incarnation as the boar-headed Varaha. Varaha avatar rescued the Earth from the chaos of the cosmic sea.

The scholars say that when Chandragupta II (Vikramaditya) renovated the cave in this manner, he wanted to portray the rescue of Northern India from the political instability and fragmentation that it had experienced prior to the rise of the Gupta Empire. 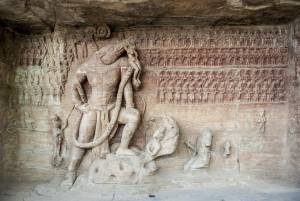 The so-called “Buddhist Caves” are not actually caves, but three separate sites of rooms carved out of stone to be used as monks’ quarters.

Located on the bank of Baghani river in the Dhar district of Madhya Pradesh. These rock cut caves posses the most amazing paintings known to be made by ancient man. According to legend these caves were established by Buddhist monk Dataka. Out of the initial 9 caves only 5 have been extant.

Bagh Caves are known for Mural Paintings – thick mud plaster in brownish orange color. The most famous features of Bagh Caves are these murals made in tempera technique.

Over this plaster there was done lime-priming and then paintings were laid. This is also known as tempera technique, which refers to use of permanent fast-drying painting medium consisting of colored pigment mixed with a water-soluble binder media.

A group of 23 caves, also called as ‘Pandav-Leni’.

Contrary to what their name suggests they have nothing to do with the characters of Mahabharata (the Pandavas).

Not satisfied with caves, the Guptas were the first dynasty to build permanent free-standing Hindu temples. This lay the foundation of Nagara School of art. Temple architecture with the development of a square sanctum and pillared portico emerged during the Gupta period.

Among the 5 stages of temple development you will find a gradual progression from flat-roofed, monolithic temples in initial stage to the sculptured ‘shikhara’ in the later years. 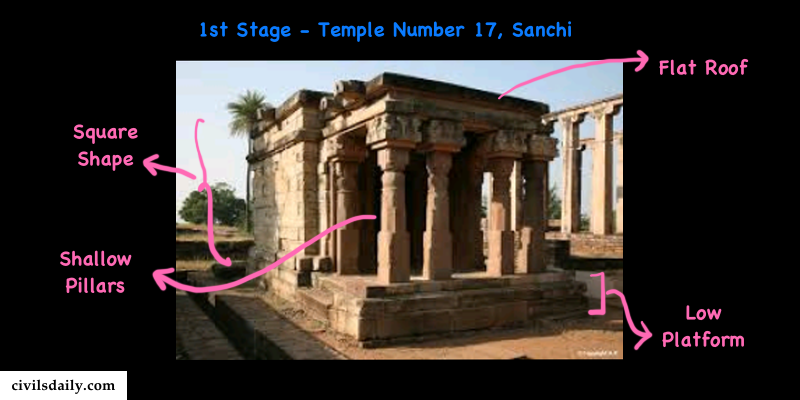 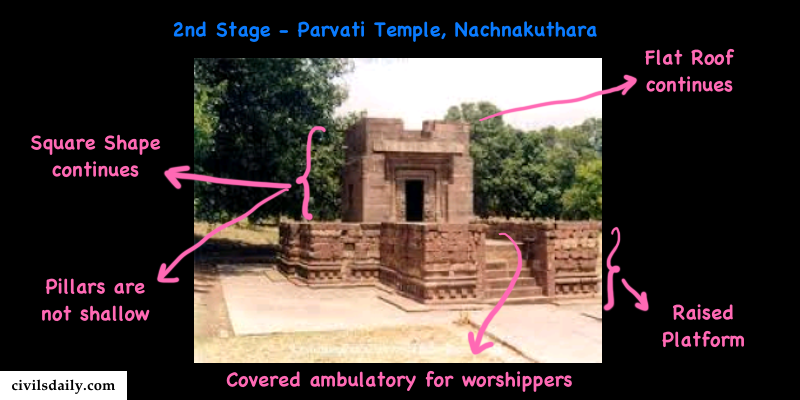 A hindu temple is a Panchayatana one when the main shrine is built on a rectangular plinth with by 4 subsidiary shrines at 4 corners making it a total of 5 shrines. The origin of the name are the sanskrit words Pancha (5) et ayatana (containing). 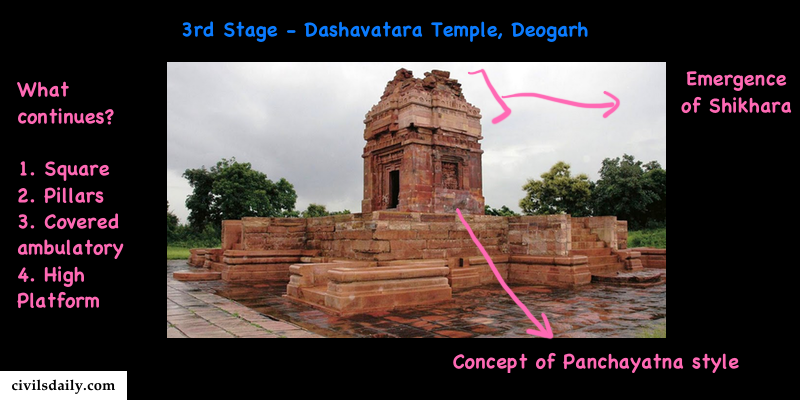 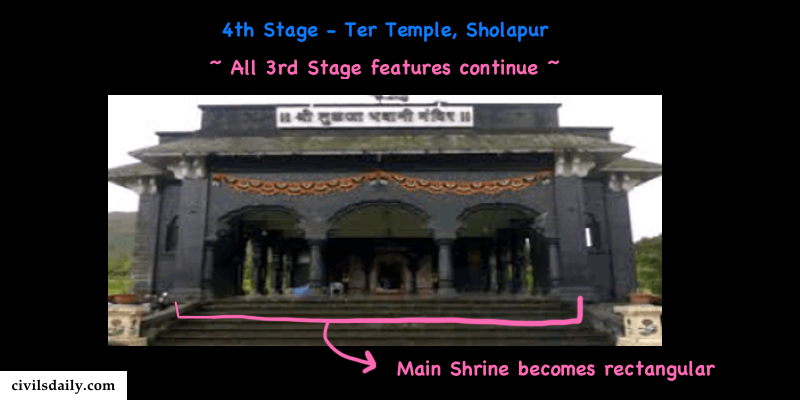 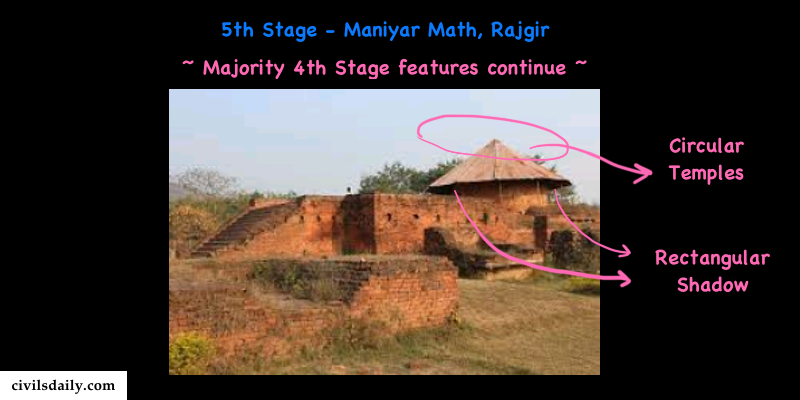 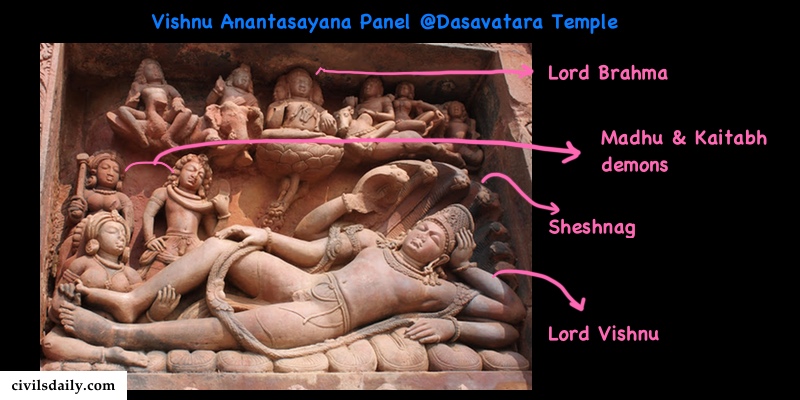 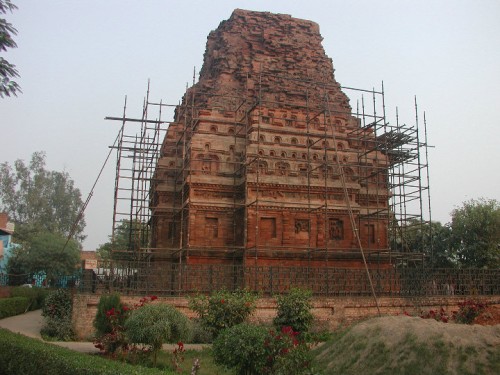 The Shiva temple at Ahichhatra belongs to the Gupta period 4th century A.D. It is famous for its two life-sized terracotta images of Ganga and Yamuna. 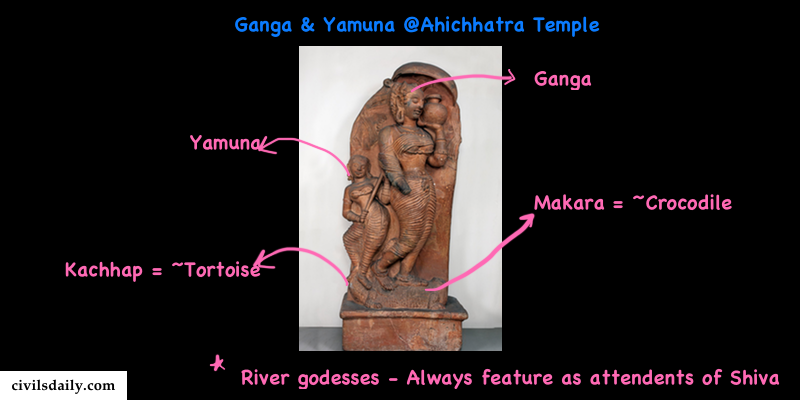 Ganga and Yamuna are installed in niches flanking the main steps leading to the upper terrace of the temple.

Ganga stands on her vehicle, the makara. and Yamuna on the kacchap.

Mathura school also witnessed some development during the Gupta period. A prominent sculpture is Standing Buddha at Matura 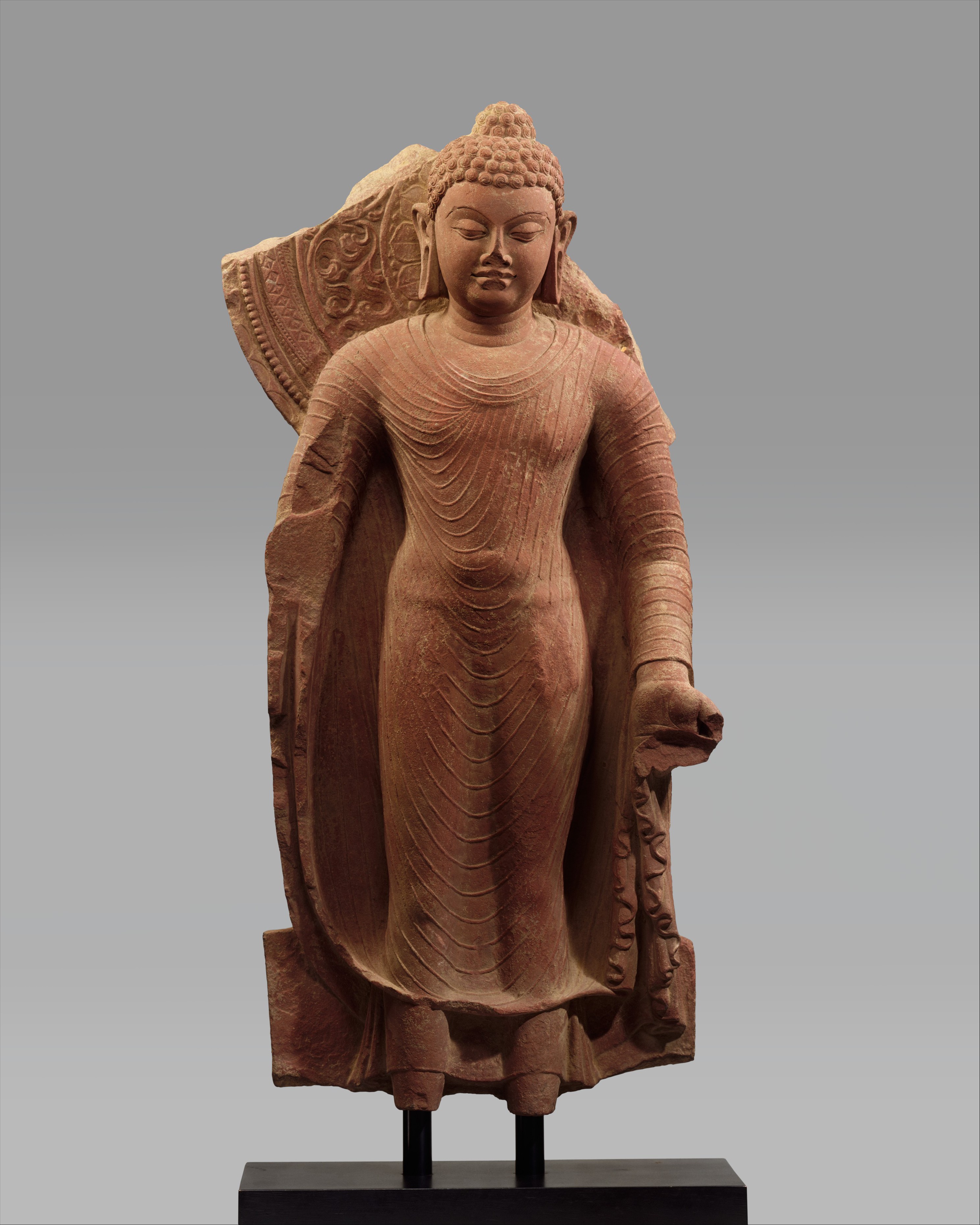 2. The Sarnath School of Sculpture

The art of Bharhut, Amravati, Sanchi and Mathura came closer and closer; melting into one – The Sarnath School.

A prominent sculpture is Standing Buddha at Sarnath 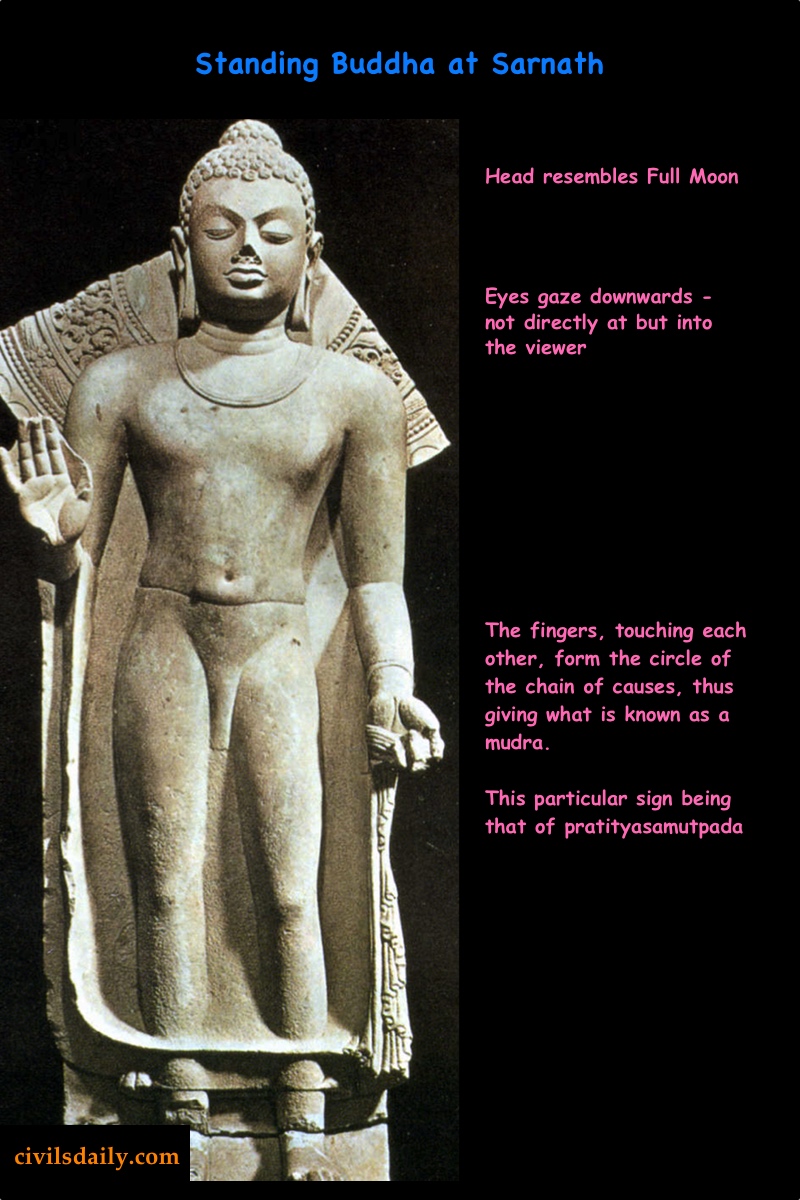