The technological missions in India was initiated in 1987 by the Rajiv Gandhi led Congress government. Rajiv Gandhi had chosen his close aid Sam Pitroda to lead the Mission. The mission had the task to cover five critical area which were considered very important for the development of the Indian economy and society.

The Core Focus areas were: 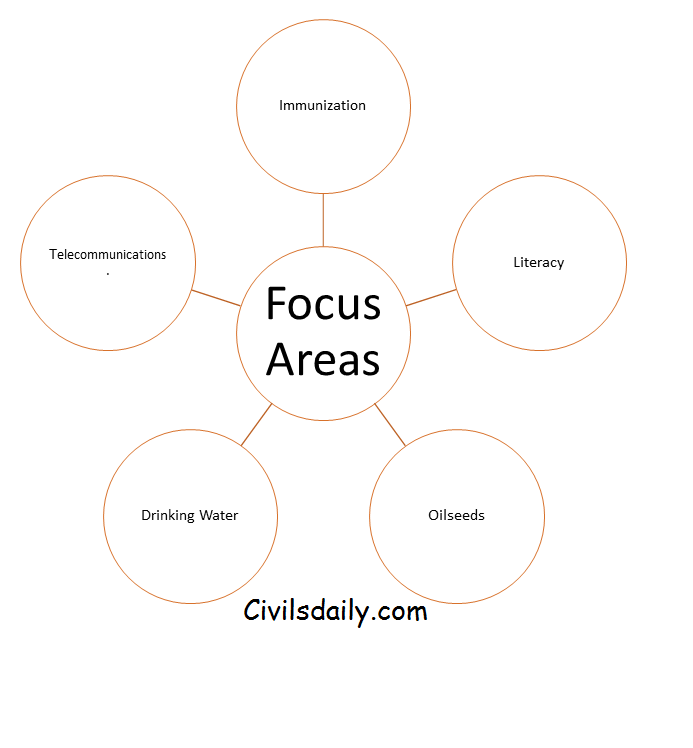 The sixth goal of Dairy Production was added in the succeeding years.

The Specific Goals of the Technology mission was 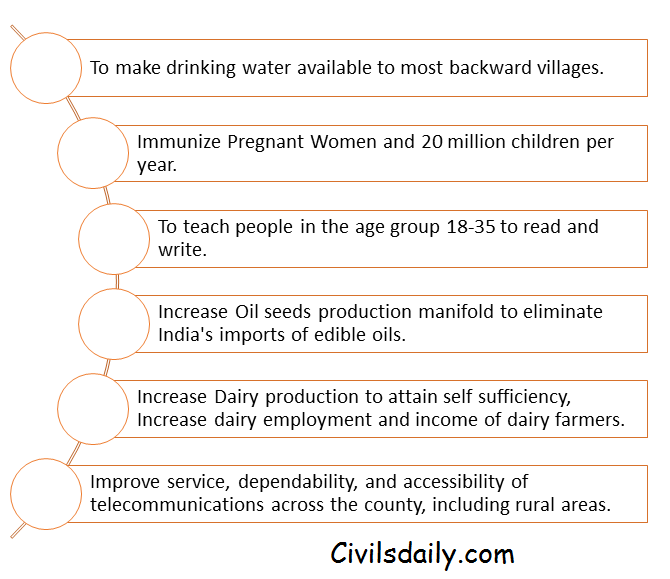 Many villages had some water, but did not have access to clean water. Water was tested in labs, and official standards of quality and quantity were established.

The mission also included an effort to educate people how to repair broken pumps when they broke. Before, when pumps broke, they usually stayed broken due to lack of local knowhow. Easy to understand repair manuals were distributed in each of India’s fifteen languages, and later made available online.

Immunization: In 1987, India had the highest amount of polio in the world. The mission met with top immunization experts decided to begin immunizing the country using an oral vaccine. As a live virus vaccine, the oral version had to be refrigerated. They developed a cold chain for handling the vaccines with industrialists to get refrigeration to all parts of India.

Literacy: When the Technology Missions began, India’s literacy rate was around 50%. Several hundred million adults were illiterate, most of them women.

The mission had the dual focus of motivating people (adults in particular) to learn, and providing materials and teachers.

Oilseeds: India was importing one billion dollars of cooking oils each year, when large portions of Indian land are well suited to growing oil crops. Farmers did not grow these crops because they found other crops were more profitable. This was causing India costly economic situation.

Their goal was to make farmers see the benefits of planting oilseeds.

Kurian, who handled buffer stocks, described his plan as such: “We move into areas where there is gross exploitation and try to restructure the marketing system so that the small producer is not fleeced by middlemen or the oil kings.”

Once the intervention on oil was complete, India was exporting oil cakes at the rate of 600 million per year.

Telecommunication: The official goal of the telecom mission was to improve service, dependability, and accessibility of telecommunications across the county, including rural areas. This was through indigenous development, local young talent, rural telecom, digital switching networks, local manufacturing and privatization.

Today, India has made maximum progress in providing accessible and cheap telecom services to 924 Million people.

Dairy Farming: The goal of the dairy mission was to develop and implement technologies to improve breeding, animal health, and fodder and milk production.

Today, India is the number one producer of milk in the world.

After the Defeat of Rajiv Gandhi led Congress Government at the centre, the successive governments have transferred the responsibility of each of the core areas to the respective parent ministries.

Technology Missions in Agriculture and Horticulture

A National Horticulture Mission was launched in 2005-06 as a Centrally Sponsored Scheme to promote holistic growth of the horticulture sector through an area based regionally differentiated strategies. The Scheme has
been subsumed as a part of Mission for Integration Development of Horticulture (MIDH) during 2014-15.

The Mission was launched to converge & synergize all the efforts through integration of existing programs & address the problems and bridge the gaps through appropriate programs in mission mode to ensure adequate, appropriate, timely & concurrent action to make coconut farming competitive & to ensures reasonable returns.

The Mission was launched 1986 to increase the production of oilseeds to reduce import and achieve self-sufficiency in edible oils. Subsequently, pulses, oil palm & maize were also brought within the purview of the Mission.

It had four Mini Missions-

I: Cotton Research and Technology Generation;

II: Transfer of Technology and Development;

The Digital Saksharta Abhiyan (DISHA) or National Digital Literacy Mission (NDLM) Scheme has been formulated to impart IT training to 52.5 lakh persons, including Anganwadi & ASHA workers and authorised ration dealers in
all the States/UTs so that non-IT literate citizens become IT literate so as to enable them to actively & effectively participate in the democratic and developmental process and also enhance their livelihood.

National Mission on Education through Information and Communication Technology

NMEICT has been envisaged as a Centrally Sponsored Scheme to leverage the potential of ICT in teaching and learning process for the benefit of all the learners in higher education institutions in any time anywhere mode.
​It has two major components: providing connectivity, along with provision for access devices to institutions & learners; & content generation.

The Government of India, in 2007, approved the launch of a Mission on Nano Science & Technology (Nano Mission) with an allocation of Rs. 1000 crore for 5 years.

The Department of Science and Technology is the nodal agency for implementing the Nano Mission. Capacity-building in this area of research will be of utmost importance for the Nano Mission so that India emerges as a global knowledge-hub in this field.

TMIR is a consortium of Ministry of Railways, Ministry of Human Resource Development, Ministry of Science and Technology and Department of Heavy Industry  on an investment sharing model for taking up identified railway projects for applied research and use on Indian Railways.

A Technology Mission has been launched to focus attention and drive modern technologies of monitoring, control, communications, design, electronics and materials for railway safety. It will help to initiate and incubate design & development projects of significant national importance.

Its objective is to develop & adopt state-of-the-art safety, control and design technologies defined by needs related to Indian conditions. It will formulate and implement projects aimed towards achieving higher throughput, lower cost of transmission per unit & safer train movement.

The Mission was announced in 2007 to address the “major constraints for improving production & consumption of technical textiles”.

It was initiated in August 2007 aims to promote R&D activities aimed at providing safe drinking water at affordable cost and in adequate quantity using appropriate Science and Technology interventions evolved through indigenous efforts.

Since quality is the main consideration of safe drinking water, processes which imply nano-material and filtration technologies have been focused.

The initiative also includes the pilot testing of credible number of products and referencing of selected technologies to the social context of the application region.
In pursuance of directives of Hon’ble Supreme Court, Technology Mission on Winning, Augmentation and Renovation (WAR) for Water has been launched in August 2009 to undertake research-led solutions, through a coordinated approach, to come out with technological options for various water challenges in different parts of the country.

This pro-active India – centric ‘solution science’ endeavour aims to strengthen the R&D capacity and capability to develop the technological solutions for existing and emerging water challenges facing the country.

It also envisages to nurture enabling activities such as human and institutional capacity building such as fellowships for researchers, training of water managers to enable identify and select most appropriate technology option, promoting centers of excellence for water research and nurturing nascent water technologies for last mile connectivity etc.

The thrust areas for initiative dynamically evolve based on need for technology based solution from the users, requirement of R&D inputs by stakeholders, assessment of S&T requirements to enable achieve technology prowess in water sector etc. The thrust areas specific to call for proposals are articulated in call document uploaded on DST website periodically.

It was initiated in January, 2009 the initiative aims to develop national research competence to drive down the cost of clean energy through pre-competitive translational research, oriented research led disruptive innovations & human and institutional capacity development.

CERI has been envisaged to –

The scope of initiative includes support for solar oriented fundamental research for solar devices, sub-systems and systems. The initiative supports feasibility assessment of fresh ideas/ concepts, including various emerging and disruptive technologies, for their potential conversion into useful technology/ product.

The envisaged thrust areas are –