PDS began as a Universal Programme in India due to food shortages of the mid 1960’s. But, since 1997 it has been exclusively targeted towards the poor, providing Wheat, Rice, Sugar and Kerosene at a highly subsidised to the below poverty line households.

The objective was to help very poor families buy food grains at a reasonably low cost to enable them to improve their nutrition standards and attain food security. The new system followed a two-tier subsidised pricing structure: one for BPL families, and another for Above the Poverty Line (APL) families. 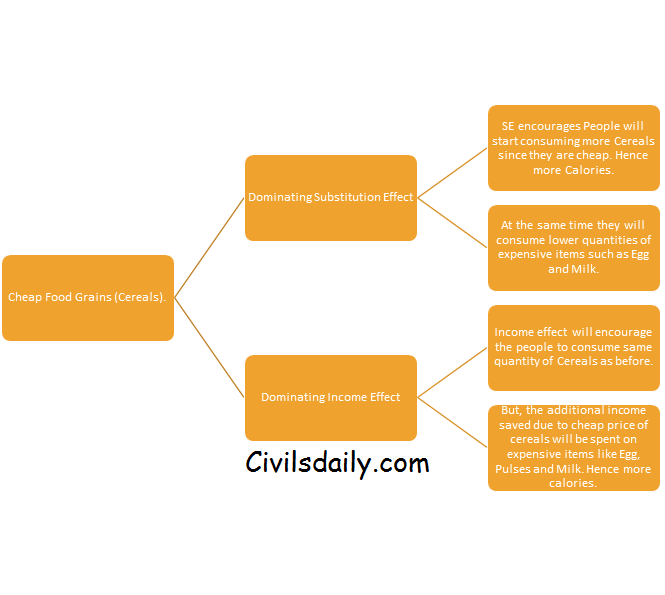 In both the cases, whether Substitution dominates or the Income effect dominates, the end result will be an increase in calories intake by consumer’s and reduction in nutritional deficiencies.

In order to make Targeted PDS more effective the Government had launched the Antyodaya Anna Yojana in December 2000.

Antyodaya Anna Yojana (AAY): The objective of the scheme was to identify the poorest households among the BPL category and to provide each of them with the following:

Individuals in the following priority groups are entitled to an AAY card, including:

Important Prices Related to the PDS 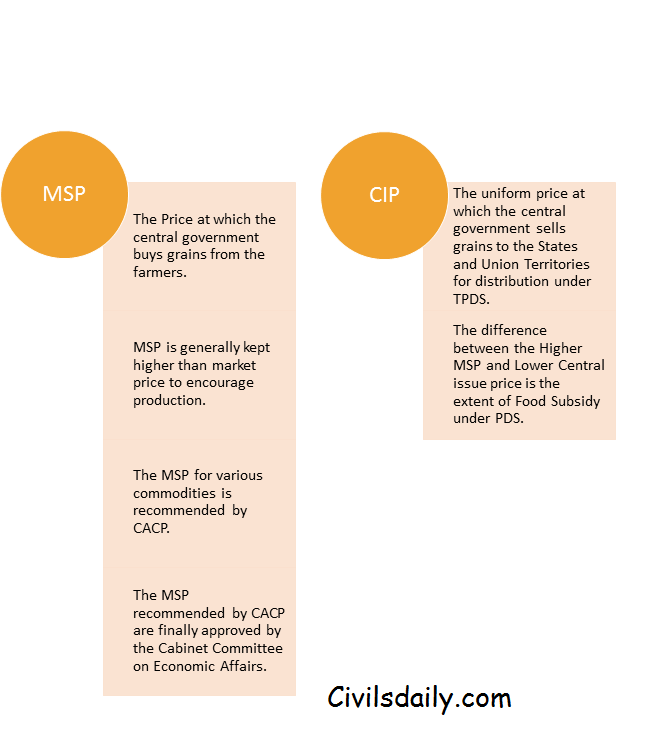 How to Strengthen the Public Distribution System.

Use of E-Technology and ICT.

Technology based reforms would help in reducing the leakages. The current system of manual recording the beneficiary is prone to corruption and tampering. The computerisation of records will resolve this problem. The end-to-end computerisation could curb large-scale diversion of grains to the open markets and help track the delivery of food grains from state depots to beneficiaries.

Technology based reforms undertaken by States:

It has been found that most of the Ration shops are situated in the urban areas of cities rather than the backward areas and slums, where most of the people poor live. The poor often have to travel miles to procure their quota of grains. The situation of Ration shops in the Urban centres also increase the risk of inclusion errors as urban middle class have a strong incentive to enrol themselves in the local Ration shops. If the ration shops are restricted to slums than the urban middle class will find it difficult to travel to slums to buy grains. Thereby eliminating the wrongful inclusions.

The PDS in India provides cereals like Wheat and Rice to the poor. However, various studies have found that the poor generally prefers coarse grains like ragi, maize, Jowar and Bajra. These cereals are not only rich in carbohydrates and protein but are also less consumed by the rich and urban middle class. If coarse cereals are sold in the PDS shops, then the rich will automatically stop using ration shops. Thereby eliminating the inclusion problem.

Decentralisation of the PDS.

The current system of centralised PDS where the centre procures the grain and then distribute it to each state is highly inefficient. The centralised PDS further adds to the unbearable administrative cost of transporting the grains from FCI to the state depots. It would be better if the states are given the power to procure and distribute grains on their own at the MSP and CIP decided by the centre.

Alternative to the PDS

Under the Universal PDS the grains are provided to every household of the state irrespective of the income level. The non-classification of the households eliminates the risk of inclusion and exclusion errors. It also reduced the cost of running the scheme as it reduced the administrative cost of identifying the poor and cost of monitoring the scheme.

Food Coupons are another alternative to PDS. Beneficiary are provided with food coupons which are equivalent to money. The food coupons are used to buy grains from local markets and grocery stores.

Retailers or grocery shop owners take these coupons to the local bank and are reimbursed with money. According to the Economic Survey 2009-10 reports, such a system will reduce administrative costs. Food coupons also decrease the scope for corruption since the store owner gets the same price from all buyers and has no incentive to turn the poor buyers away. Moreover, BPL customers have more choice; they can avoid stores that try to sell them poor-quality grain.

DBT provides for cash transfers to the poor. Under DBT, beneficiaries will be given money by the government in their respective bank accounts which can be used to but grains from the open markets. Under the DBT system the government will provide money directly to the target group usually poor households. The identification of the poor households are much easier under the DBT system, since the bank accounts are linked with Aadhaar and can be easily monitored.

Some of the potential advantages of these programmes include: (i) reduced administrative costs, (ii) expanded choices for beneficiaries, and (iii) competitive pricing among grocery stores.

Some issues with the DBT:

Advantages of PDS and DBT: A Comparison 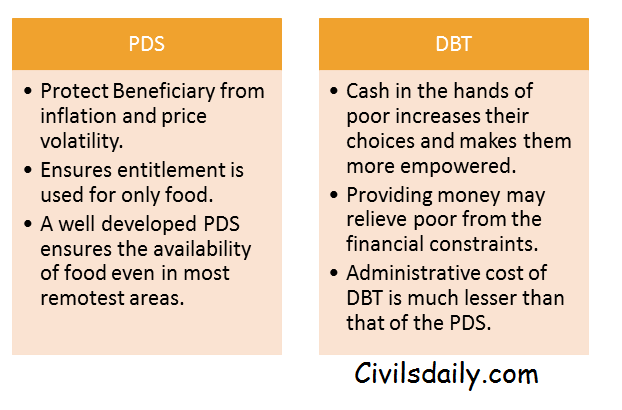 Disadvantage of PDS and DBT: A Comparison 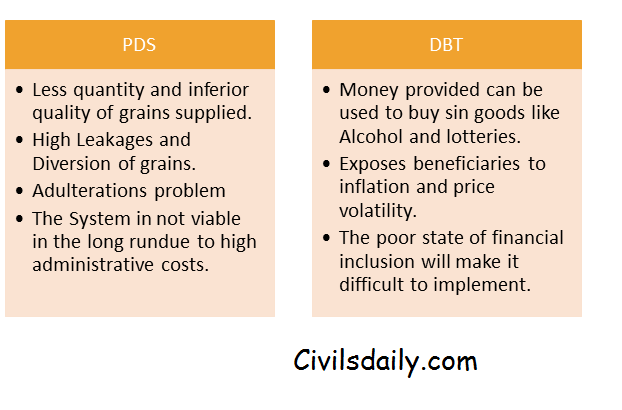 The NFSA was passed in the Parliament in the year 2013, the NFSA seeks to provide the food to all individuals by making it a statutory right.

A comparison of existing TDPS and NFSA