Northern plains are the youngest physiographic feature in India. They lie to the south of the Shivaliks, separated by the Himalayan Frontal Fault (HFF). The southern boundary is a wavy irregular line along the northern edge of the Peninsular India. On the eastern side, the plains are bordered by the Purvanchal hills.

Due to the uplift of the Himalayas in the Tethys Sea, the northern part of the Indian Peninsula got subsided and formed a large basin. 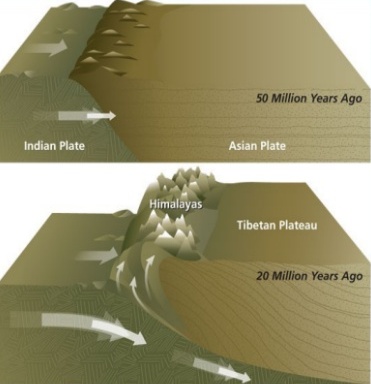 That basin was filled with sediments from the rivers which came from the mountains in the north and from the peninsula in the south. These extensive alluvial deposits led to the formation of the northern plains of India.

Physiographic Divisions of the Northern Plains:

From the north to the south, the northern plains can be divided into three major zones:

The alluvial plains can be further divided into the Khadar and the Bhangar as illustrated below:

Let’s understand these divisions one by one:

There is some problem in this page… it is all blank