The months of October-November form a period of transition from the hot rainy season to the dry winter conditions.

The withdrawal of the south-west monsoon and the onset of north-east monsoon are both gradual phenomenon. They take place almost at the same time and tend to merge. This explains the popularity of the phrase “Retreating Monsoon”.

A Season of Retreating Monsoon

The retreat takes place due to the weakening of the low-pressure area over the north-western parts of India (and thus a gradual transition of ITCZ towards the south). This happens due to:

Consequently, the air pressure starts decreasing. Such changes in the atmospheric pressure cause the south-west monsoons to withdraw.

The Retreat of Monsoons is a process much slower than its arrival. It does not imply a right about turn but a gradual change of comparative pressure positions, thus gradually weakening and reducing the area of coverage and influence.

The south-west monsoons start retreating in the first week of September from Pakistan’s border in North-West India. Thus these winds withdraw earlier from the regions they reached the last.

The monsoon retreats from the western Rajasthan by the first week of September. It withdraws from Rajasthan, Gujarat, Western Ganga plain and the Central Highlands by the end of the month. By the beginning of October, the low pressure covers northern parts of the Bay of Bengal and by early November, it moves over Karnataka and Tamil Nadu. By the middle of December, the centre of low pressure is completely removed from the Peninsula. 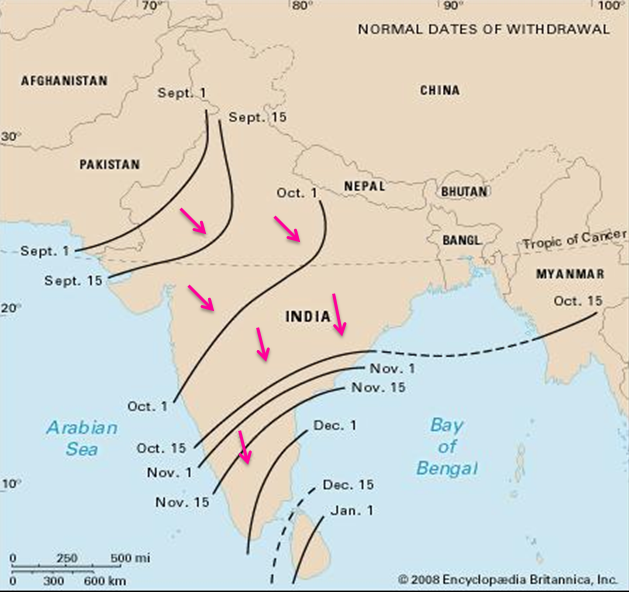 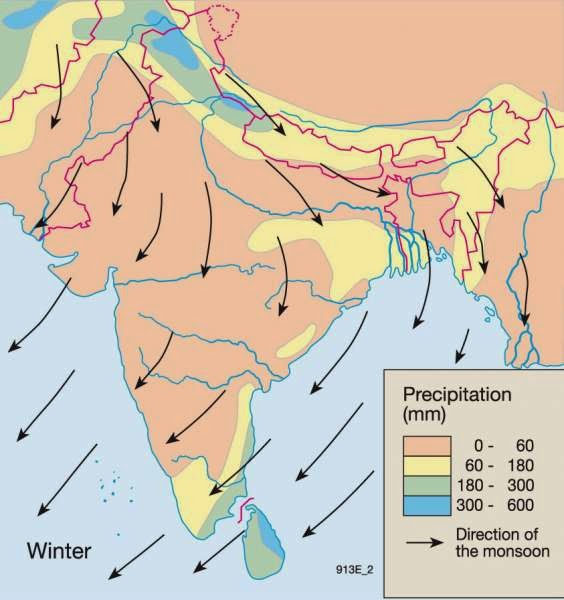 Now that we have studied all the seasons in detail, let’s have a look at the annual distribution and variability of rainfall in India: 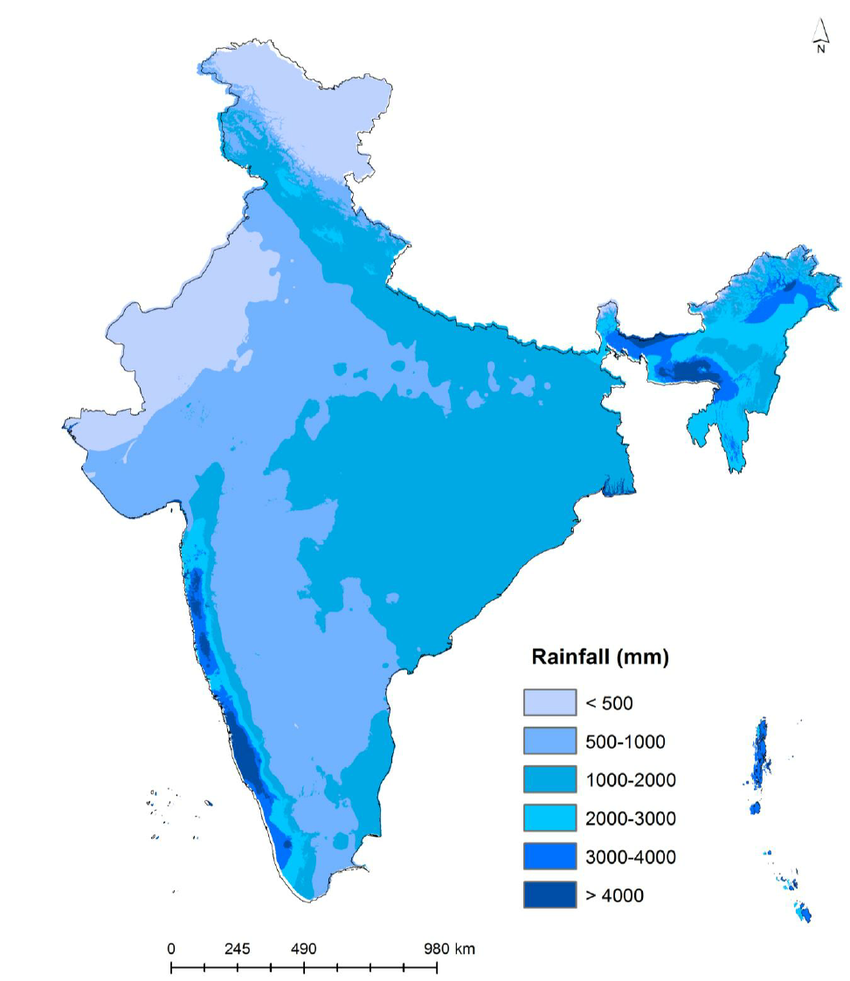 The rainfall in India is highly variable. The actual rainfall of a place in a year deviates from the average rainfall by 10-60%.The variability of rainfall is computed with the help of the following formula:

The variability of rainfall is computed with the help of the following formula:

where C.V. is the coefficient of variation.

As discussed in the beginning, India has a monsoon type of climate with many regional variations. These variations represent the subtypes of the monsoon climate. It is on this basis that the climatic regions can be identified.

A climatic region has a homogeneous climatic condition which is the result of a combination of factors. Temperature and rainfall are two important elements which are considered to be decisive in all the schemes of climatic classification.

A) Koeppen’s scheme of Climatic classification

It is based on monthly values of temperature and precipitation.

He identified five major climatic types and used letter symbols A, B, C, D and E to denote them:

These five types can be further subdivided into sub-types on the basis of seasonal variations in the distribution pattern of rainfall and temperature. Koppen used small letters such as m, w or h to define these sub-types:

c (less than four months with mean temperature over 10°C)

Accordingly, India can be divided into the following eight climatic regions: 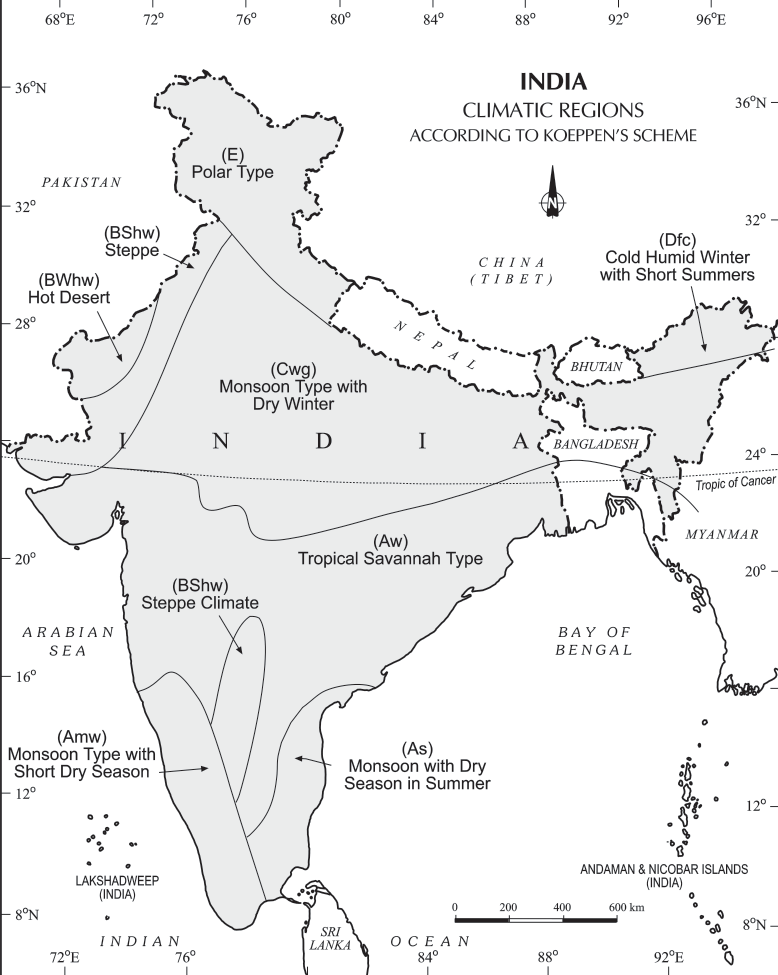 B) Climatic Divisions by Stamp and Kendrew:

Kendrew and Stamp on the basis of the 18°C isotherm for the month of January (which almost follows the Tropic of Cancer) divided India into two major climatic regions:

These two major climatic regions have been further divided into eleven regions as follows: 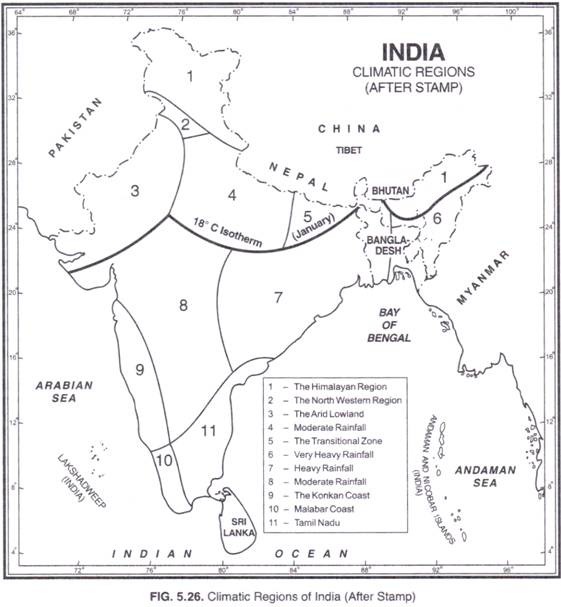