Monsoon is a familiar though a little known climatic phenomenon. Despite the observations spread over centuries, the monsoon continues to puzzle the scientists. Many attempts have been made to discover the exact nature and causation of monsoon, but so far, no single theory has been able to explain the monsoon fully.

Let’s look at some of the important concepts about the origin of monsoons. We will study these along the following lines:

Halley hypothesized that the primary cause of the annual cycle of Indian monsoon circulation was a differential heating effect between the ocean and land in South Asia.

Thus the first model ever proposed about the mechanism of the Indian monsoon was Haley’s planetary scale sea-breeze – land breeze system in 1690’s.

Hadley later argued that Haley’s model was lacking in the physical ingredient of the effect of rotation of earth about its axis. Hadley reasoned that the monsoon originates in the SE trades of the southern hemisphere and as it flows across the equator towards the heated landmass, the coriolis force causes it to turn to right, thereby forming the summer monsoon or the SW monsoon.

2. The role of moisture:

Moisture plays an important role in the atmospheric circulation which was not appreciated by either Halley or Hadley.

In this respect, the release of latent heat augments the differential heating produced by the land-sea contrast by providing a mechanism for the solar energy received over the vast stretches of the Indian Ocean to be collected, stored, concentrated and later released over the parched landscape of India by a massive atmospheric motion (See the following image to understand this transfer of solar energy) . As the moisture laden air comes over India, with its upliftment there takes place condensation releasing latent heat – augmenting the low pressure conditions i.e. the cause getting augmented by its effect.

The shifting of ITCZ – Dr. Flohn

The existence of Asian monsoon according to Dr. Flohn is not due to the temperature contrast between land and sea but primarily due to the annual migration of thermally induced planetary winds and pressure belts. For Flohn, the winter monsoon is nothing but the tropical easterlies or the northern trade winds. According to Flohn, the SW monsoon is constituted by the equatorial westerlies which have been displaced northward (because of shift of ITCZ by 20° or more).

1. The role of Tibetan Plateau:

A remarkable aspect of the large scale circulation during the summer monsoon season over south-Asia is the upper tropospheric anti-cyclone situated over the Tibetan Plateau.

The role of Jet streams: 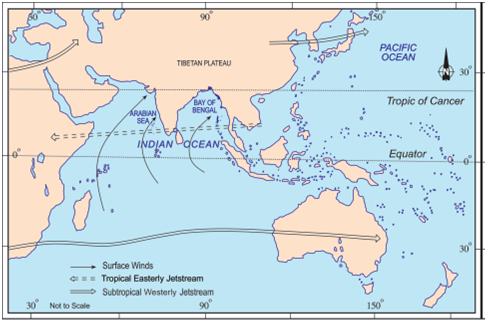 Factors which influence the South-West monsoon intensity and rainfall distribution:

1. Mascarene High and the Somali Jetstream: It is the high pressure area at sea level south of the equator in the Indian Ocean near Mascarene Islands. The position and intensity of this high are considered to be closely linked to the south summer monsoon activity.

According to scientists, the broad belt of high pressure around the Mascarene Islands generates a cross-equatorial flow known as the Somali Jet which brings heavy rain to India’s west coast. A strong, low level jet usually means a strong monsoon over peninsular India.

2. Variation in the axis of the monsoon trough: The monsoon trough axis experiences considerable day to day variation in its position, which has a vital bearing on the monsoon rainfall distribution in the region. During the break monsoon periods, when there is a temporary lull in monsoon activity, the trough line shifts to the foothills of the Himalayas. Rainfall over the central parts of India decreases considerably and there is an increase in rainfall over northern India along the Himalayan foothills.

B. El-Nino (Spanish for male child)

These two are believed to be inter-connected – the southern oscillation has been identified as the atmospheric counterpart to El-Nino. Both are together referred to as ENSO.

During the high southern oscillation phase (Normal situation), precipitation tends to be abundant in the Indonesian – Australian region, most of the south Asian region, SE Africa and northern coast of South America. Relatively dry conditions prevail over the equatorial pacific, east central Africa and northern Mexico.

During the low phase of the southern oscillation (El-Nino), the rainfall anomalies are approximately opposite. The El-Nino is found to be adversely correlated with the SW monsoon rain.

La-Nina (Spanish for girl child) refers to the reinforced normal situation and is found to be positively correlated with the SW monsoon rain.