Before we discuss the natural vegetation types found in India, let’s get acquainted with some basic terms:

Flora refers to plants of a particular region or period, listed as a species and considered as a group. Likewise, fauna refers to the animal life, considered collectively, of any given period, environment or region.

Vegetation, on the other hand, refers to the assemblage of plant species in a given environmental frame or ecological frame. It is broader than the term flora which refers to species composition. Further:

Forest: The term forest implies ‘natural vegetation’ of the area, existing from thousands of years and supporting a variety of biodiversity, forming a complex ecosystem.

Depending on the physical, geographical, climatic and ecological factors, there are different types of forests like evergreen forest (mainly composed of evergreen tree species i.e. species having leaves all throughout the year) and deciduous forest (mainly composed of deciduous tree species i.e. species which lose their leaves during particular months of the year). Each forest type forms a habitat for a specific community of animals that are adapted to live in it.

Various factors which influence the type and distribution of natural vegetation and wildlife:

The nature of land affects the natural vegetation directly and indirectly. E.g. the type of vegetation in the mountainous regions is different than that in the plateau and plain areas. The fertile land is generally devoted to agriculture, while the undulating and rough terrains are areas where grassland and woodlands develop and give shelter to a variety of wildlife.

Areas of heavy rainfall have more dense vegetation as compared to other areas of less rainfall.

See the following diagram to understand the combined effect of temperature and annual precipitation on the vegetation type of an area:

Photoperiod, also called the light duration or day length, refers to the length of the light period as compared to the darkness within a day. The variation in photoperiod at different places is due to the differences in latitude, altitude, season and duration of the day. Due to longer duration of sunlight, trees grow faster in summer.

Increasing elevation causes a distribution of vegetation similar to that of increasing latitude. In general, ‘altitude mimics latitude’ and there occurs a close parallel between latitudinal and altitudinal zonation of climate and thus natural vegetation too. E.g. Mount Kenya in east Africa and Mount Chimborozo in Equador have their feet on the equator but their peaks are snow covered.

It was Alexander Von Humboldt who first recognised the relationship between vegetation and altitude.

The Forest Types of India:

In general, the following inter-relationship is observed in India:

Observe this broad relationship as highlighted in the following map: 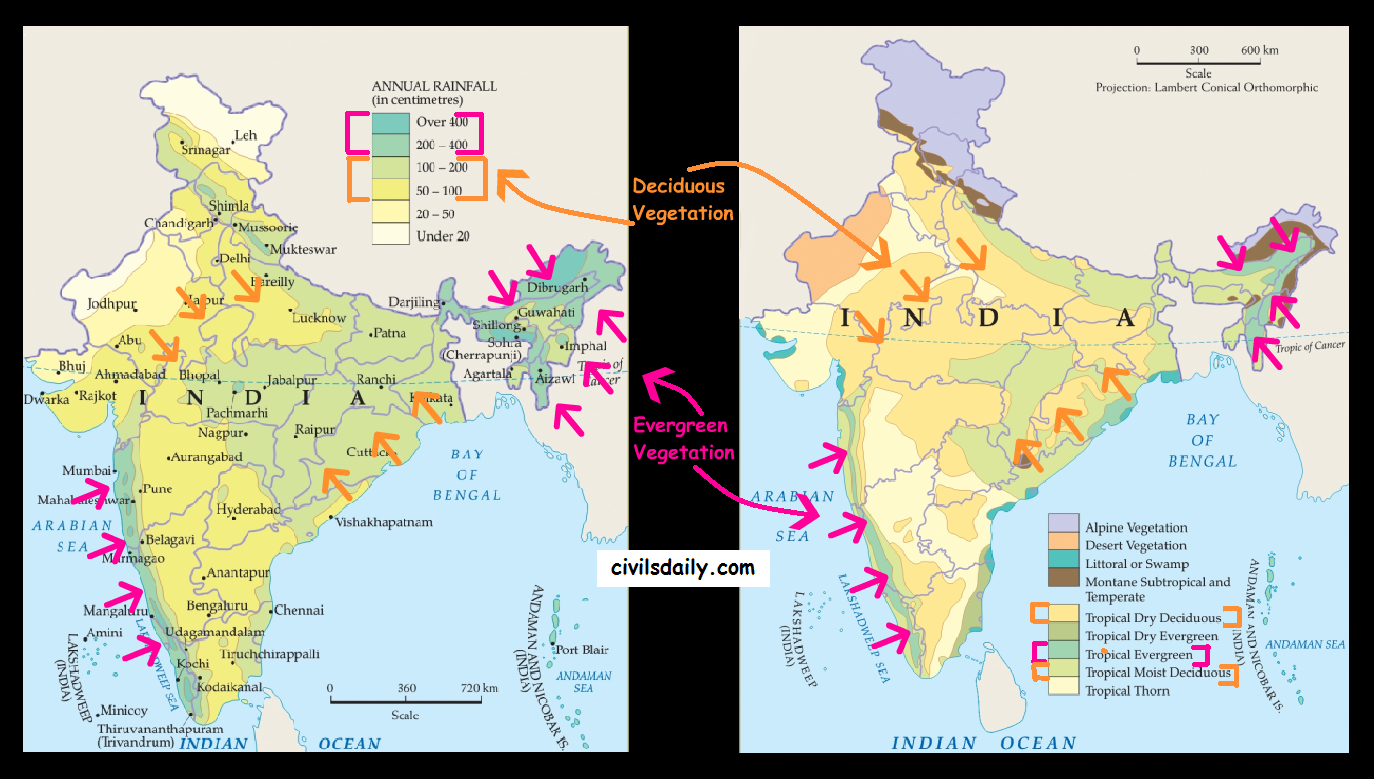 High rainfall areas (>200cm) —> Evergreen forests grow in the high rainfall areas of the Western Ghats, North –eastern India and the Andaman and Nicobar Islands. These forests grow in areas where the monsoon period lasts for several months. There is no definite time for trees to shed their leaves, flowering and fruition. As such these forests appear green all the year round, hence the name evergreen.

Moderate Rainfall Areas (70-200cm) —>Deciduous forests are found in regions with a moderate amount of seasonal rainfall that lasts for only a few months. Most of the forests in which Teak trees grow are of this type. The deciduous trees shed their leaves during the winter and hot summer months.

Low Rainfall areas/ Semi-arid areas (<70cm) —> Thorn forests are found in the semi-arid regions of India. The trees, which are sparsely distributed, are surrounded by open grassy areas.

Apart from these, mangroves forests grow along the coast, especially in the river deltas. These plants are uniquely adapted to be able to grow in a mix of saline and freshwater (will be taken up in detail in the following sections.)