When every economist worth his salt is getting pulled by print and digital media to share his/ her views on this topic, it calls for a deep introspection and a bout of Mussaddilal’s age old classic Office-Office to understand why things are not working for india on the Ease of doing business (World Bank Report).

If you want to follow the evolution of this news, follow this NewsTrail – Ease of Doing Business

If you want a quick infographic on the ranking methodology, we have an amazing infographic for you. Ignore the text in blue box at the end of the infographic but understand the static theory from this one. 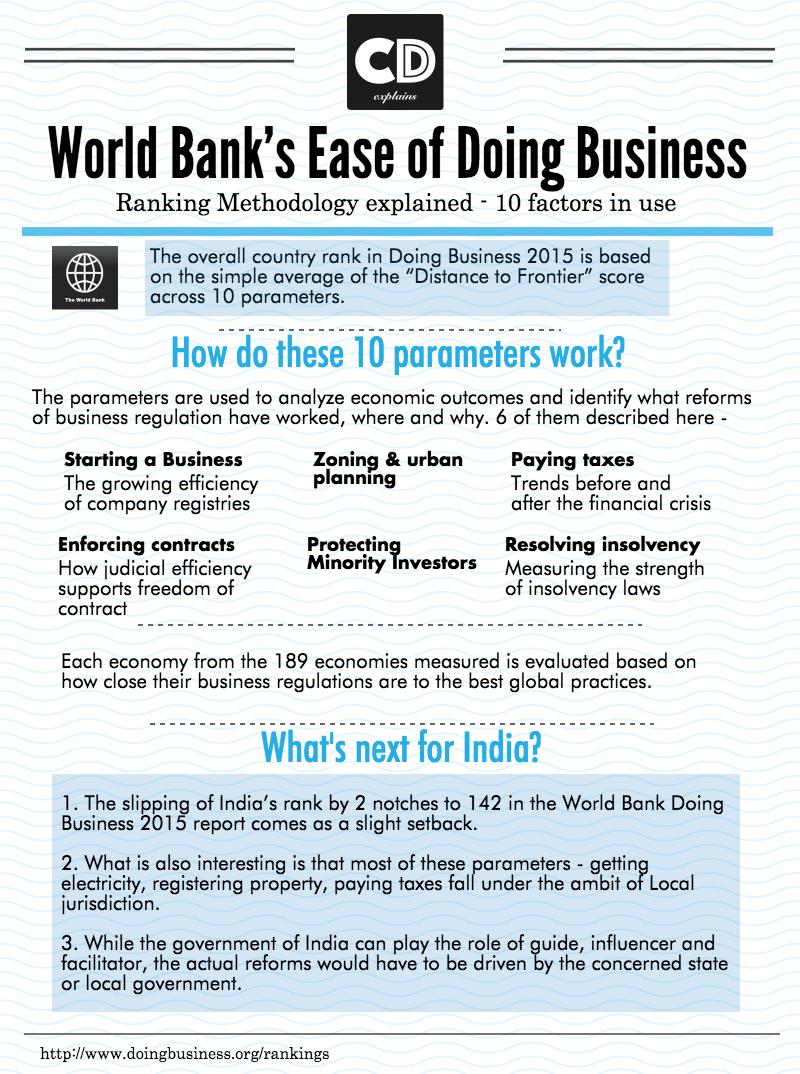 If you want to know more, read through what happened this year:

India remains one of the planet’s toughest places to do business, according to the World Bank.

In the development lender’s latest “Doing Business” report, which ranks 190 nations on how easy it is for private companies to follow regulations in 11 areas, India comes in 130th.

New Zealand tops this year’s ranking, dethroning Singapore. The World Bank highlighted Indonesia, Pakistan, Brunei and seven other economies for making the biggest improvements in their business environments in the past year.

The World Bank recognized some achievements by the Indian government this past year:

An electronic system for companies to pay employee insurance contributions,

Easier procedures for exporting and importing, and

What then is the reason for a relatively less improvement made by India at the world’s stage?

Due to even-larger improvements in other economies, India’s ranking in several areas fell this year.

On the ease of starting a business, it slipped to 155th from 151st.

On dealing with construction permits, it stumbled to 185th from 184th. On paying taxes, it held steady at 172nd.

Does this augur bad stuff for India? Are we not improving? Is the ranking an absolute measure to judge how we are doing?

The World Bank report’s authors acknowledge that the ranking doesn’t reflect all the progress India has made recently in improving the business environment.

“Lawmakers have recommended the implementation of a large number of reforms across all states, going beyond the scope of Doing Business,” they write.

India of late has upgraded infrastructure, raised foreign-investment limits and digitized approvals and registrations. Groundwork was also laid this summer for a sales-tax revamp that hasn’t yet been implemented. (It might not even be implemented in time to affect next year’s Doing Business ranking, which will cover the business climate as of June 2017.)

So what went wrong?

First, some of the reforms undertaken missed this year’s bus—this report accounts for reforms which had been implemented by 1 June 2016. India also hopes that the insolvency and bankruptcy code will be implemented before the cut-off date for next year’s report

Second, the World Bank has included a new criterion “postfiling index” under the header “paying taxes”. Used in the report to measure the efficiency of “processes that occur after a firm complies with its regular tax obligations”, the post-filing index is a criterion in which India finds itself fourth from the bottom!

Third, there are other countries too trying their best to climb up the ease of doing business rankings.

Fourth, these rankings cover only the two cities of Delhi and Mumbai. A ranking of states last year showed the states of Gujarat, Andhra Pradesh, Jharkhand, Chhattisgarh and Madhya Pradesh leading the charts in implementing business reforms.

Therefore, India’s overall position may well be better than what this latest report shows!

Among the new features of this year’s Doing Business report is an attempt to gauge whether business rules apply differently to female and male entrepreneurs.

India should despatch a couple of envoys to Georgia and Kazakhstan each. In 2006, Georgia’s rank was 100; this year it ended up at No.16. Kazakhstan (now ranked 35) joined Georgia among the top improvers for the fourth time in the last 12 years.

In India, the bank found that despite yawning gender divides in many respects, the country makes doing business just as challenging for women as for men. It takes both male and female Mumbaikars 14 procedures and about a month, for instance, to start a new company. The irony of ironies!

#1. Consider following statements in regard with ‘Ease of Doing Business report’.

1.Ease of Doing Business report is published by World Bank.

2.India improved its position to 130 in the World Bank Ease of Doing Business 2017 report.

#2. India’s ranking in the ‘Ease of Doing Business Index’ is sometimes seen in the news. Which of the following has declared that ranking?

a) Organization for Economic Cooperation and Development (OECD)

#2. According to a report, India is home to the third largest number of technology-driven start-ups in the world, with the US and the UK occupying the top two positions. Examine which factors have enabled India to achieve this feat.

#3. The marginal improvement by one rank i.e. from 131 to 130 in the Ease of Doing Business ranking is a reminder for several course corrections that are needed in the Indian politico-economic system. Comment.