India is one of the 17 mega diverse countries of the world. With only 2.4% of the world’s land area, 16.7% of the world’s human population and 18% livestock, it contributes about 8% of the known global biodiversity, however, putting enormous demands on our natural resources. India is home to world’s largest wild tigers population and has a unique assemblage of globally important endangered species like Asiatic lion, Asian Elephant, One-horned Rhinoceros, Gangetic River Dolphin, Snow Leopard, Kashmir Stag, Dugong, Gharial, Great Indian Bustard, Lion Tailed Macaque etc. The following steps have thus been taken to protect and manage the wildlife of the country:

1. The Government of India enacted Wild Life (Protection) Act 1972 with the objective of effectively protecting the wild life of this country and to control poaching, smuggling and illegal trade in wildlife and its derivatives.

2. A National Board for Wildlife (NBWL), chaired by the Prime Minister of India provides for policy framework for wildlife conservation in the country.

4. The Indian Constitution entails the subject of forests and wildlife in the Concurrent list thus laying the responsibility of wildlife conservation on both the Centre and the State. The Federal Ministry acts as a guiding torch dealing with the policies and planning on wildlife conservation, while the provincial Forest Departments are vested with the responsibility of implementation of national policies and plans.

5. Specialized projects: To save the endangered species of animals, specialised projects are being implemented with international cooperation (WWF, UNDP, UNEP, IUCN) as well as on a stand-alone basis e.g.

More recently, the Black Buck (chinkara), the Great Indian Bustard (godawan) and the snow leopard etc. have been given full or partial legal protection against hunting and trade throughout India.

6. The Protected Areas of India:

Protected areas are those in which human occupation or at least the exploitation of resources is limited. These are defined according to the categorization guidelines for protected areas by the International Union for Conservation of Nature (IUCN). There are several kinds of protected areas, which vary by level of protection depending on the enabling laws of each country or the regulations of the international organizations involved.

There are 4 categories of the Protected Areas in India viz,

Let’s look at these in detail:

7. Biosphere Reserves: A biosphere reserve is an area of land or water that is protected by law in order to support the conservation of ecosystems, as well as the sustainability of mankind’s impact on the environment. 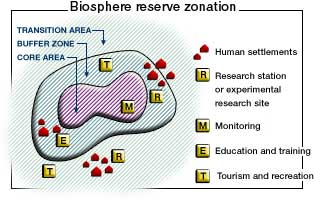 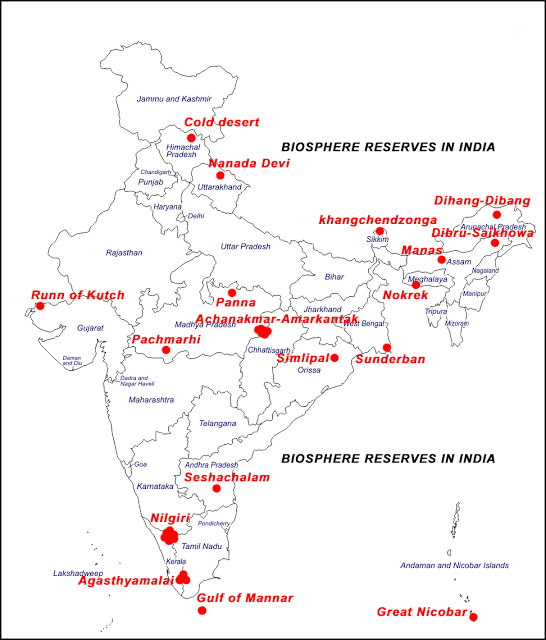 How is a biosphere reserve different from a national park/ wildlife sanctuary?

Some of the other differences are listed in the image below: 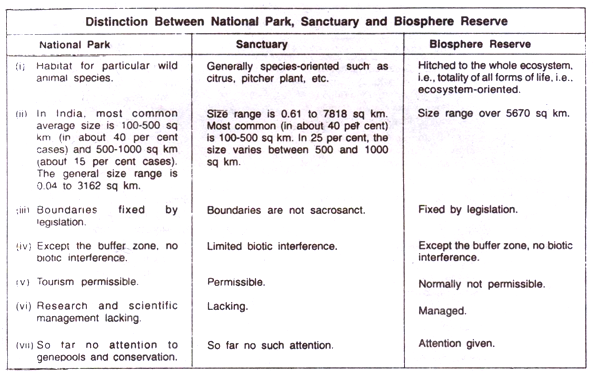 8. Some other important Conservation Sites:

9. Role of communities: Communities have played a vital role in the conservation and protection of wildlife in India. E.g.