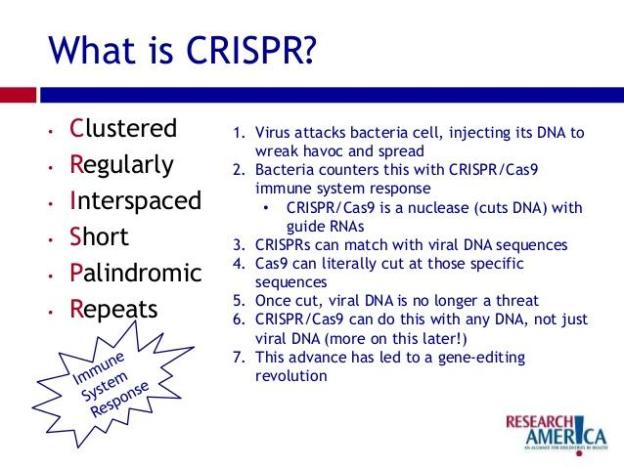 It is a very crucial technology. It is likely to have unprecedented impact on mankind. UPSC in last few years have asked a number of Questions on Land-mark developments and Since it is a revolutionary development, it is important for mains 2017.

Working of the CRISPR

What is Genome Editing?

Arguably, the most important advantages of CRISPR/Cas9 over other genome editing technologies is its simplicity and efficiency.

To date, the CRISPR/Cas9 gene editing tool appears to work in nearly every organism, from micro-organisms to monkeys, and in every cell type: kidney, heart and those, like T-cells, that researchers had previously found difficult to modify.

Some of the earliest papers using CRISPR/Cas9 for gene editing focused on crops important for agriculture such as rice and wheat. It was realized early on that this system could be utilized to specifically alter the DNA of these crop species to improve traits like disease and drought tolerance.

Disease modeling using animals has been a hurdle for study of many types of human diseases due to the difficulty in generating genetically modified animals that accurately recapitulate human pathology. The process was inefficient and inaccurate or simply impossible to do. CRISPR-Cas9 has allowed for generation of transgenic animals like rats, monkeys and other animals which are more suitable for human disease modeling than mice and thus permit better drug-development tests.

In 2014, CRISPR-Cas9 was used in mice to correct a mutation associated with a human metabolic disease called tyrosinaemia (Yin et al., 2014). It was the first use of CRISPR/Cas9 to fix a disease-causing mutation in an adult animal and an important step towards using the technology for gene therapy in humans.

Q.) “CRISPR technology is much faster, yield better results, and is relatively easy to do.” Examine.