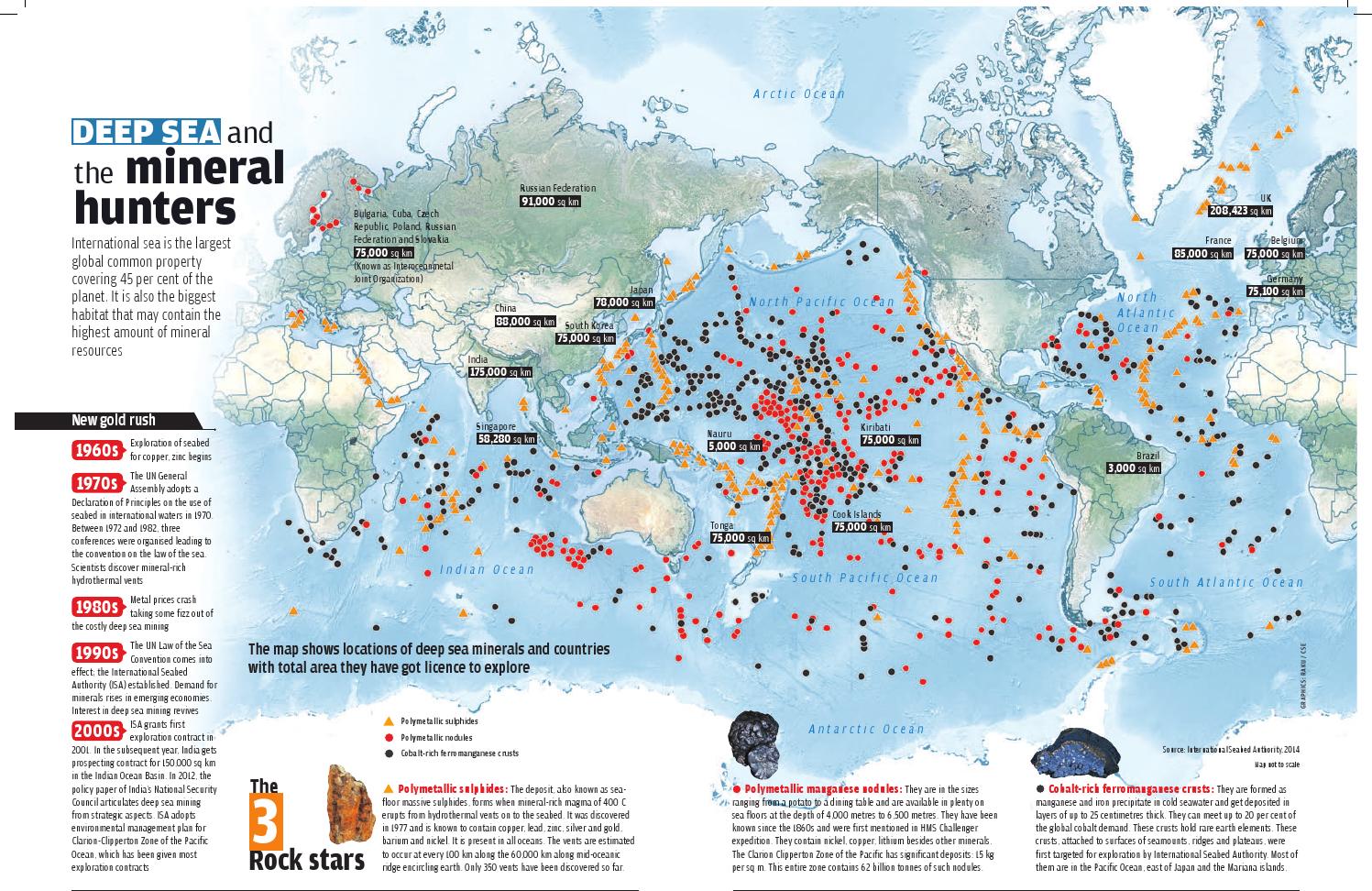 Polymetallic manganese nodules (PMN)
These are small potato-sized (from millimetres to tens of centimetres in diameter) lumps of material precipitated from seawater and sediment pore water at slow rates over millions of years and occur mainly on the deep-seafloor.
They contain approximately 24% manganese, compared to 35 to 55% manganese in land ore bodies, so they do not offer solid economics as a manganese source, but they also contain iron (14%), copper (>1%), nickel(>1%), and cobalt (0.25%).

Polymetallic sulphides (PMS)
PMS are formed by precipitation of metals leached by hydrothermal fluid as it interacts with the cooler ambient seawater at or beneath the seafloor at hydrothermal vent sites.
PMS are typically composed of iron pyrite but contain varying proportions of pyrrhotite, pyrite/marcasite, sphalerite/wurtzite, chalcopyrite, bornite, isocubanite, and galena.

Copper and zinc are the most likely metals to be recovered, but some deposits exhibit significant gold (0–20ppm) and silver (0–1200 ppm) grades as well.
Submarine massive polymetallic sulphide bodies are principally found along the earth’s major tectonic belts.

Cobalt-rich ferromanganese crusts
Cobalt-rich ferromanganese crusts occur at shallower depths of <400 to about > 5000 meters in areas of significant volcanic activity.
The crusts grow on hard-rock substrates of volcanic origin by the precipitation of metals dissolved in seawater in areas of seamounts, ridges, plateaus and where prevailing currents prevent deposition of unconsolidated sediments and occupy large areas on top of these topography highs.
In many cases, the deposits occur within the exclusive economic zone (EEZ) of the countries.
Similar in general composition to the polymetallic nodules, cobalt crusts are attracting investment in exploration for higher cobalt percentage (up to 2%), platinum (0.0001%) and Rare Earth Elements (REE) besides Nickel and Manganese.

1. India’s exclusive rights for exploration of Polymetallic Nodules in the allotted area in the Central Indian Ocean Basin will continue and would open new opportunities for resources of commercial and strategic value.

2. India is entirely dependent on imports to meet its requirements of cobalt, which is the most strategic of the three metals (cobalt, copper and nickel). As for copper and nickel, India is in a precarious position.

 Providing a boost to coastal and national economies and development of blue economy.

 Presently, China is controlling more than 95% of rare earth metals. This move will nullify the increasing influence of China.

 It will strengthen the bilateral relationship of India with Japan, Germany and South Korea.